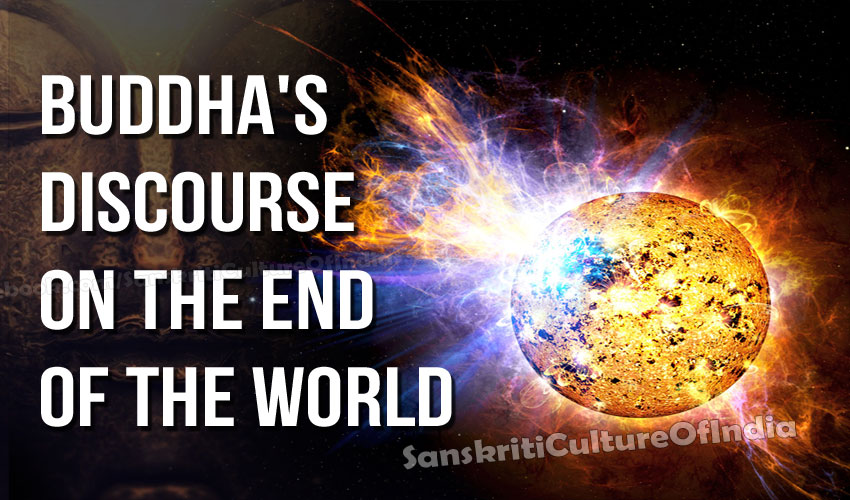 Many religions predict the end of the world. According to Hinduism, at the end of each cycle of creation. which spans billions of years, Brahman in his aspect as Rudra will destroy the worlds and withdraws them into himself. According to Christianity the world will come to an end through a series of cataclysmic events followed by resurrection of departed souls and judgment day.

According to Vedic tradition, Aditi is mother of eight Adityas or solar deities (suns). At the end of creation these eight suns will shine together in the skies. In the following sermon, the Buddha speaks of how seven suns will appear in the sky and how the planet earth will eventually be destroyed, after many hundreds and thousands of years, through a series of cataclysmic events which are described below.

The manner in which the Buddha predicted the end of the earth sounds very much like a modern scientific theory on the destruction of planets and the entire solar system. The Buddha also clearly mentions that all life forms will vanish before the appearance of the second sun. Thereafter the earth will be a dead planet ready for its eventual destruction.

The seven suns mentioned in the discourse probably are various planets of the solar system that would become hot and shine like stars due to some changes in the activity of the sun or its gravitational force.

The manner in which the drying up of the planet earth is described reminds one of the greenhouse effect and the events that might have happened on planets like Mars which had once oceans and rivers and probably life forms.

The Buddha delivered this sermon to remind his disciples of the impermanent nature of the world and of our existence, which is subject to decay and renewal and from which even a god like Brahma is not free unless he overcomes it by practicing Dhamma and following the eight-fold path.