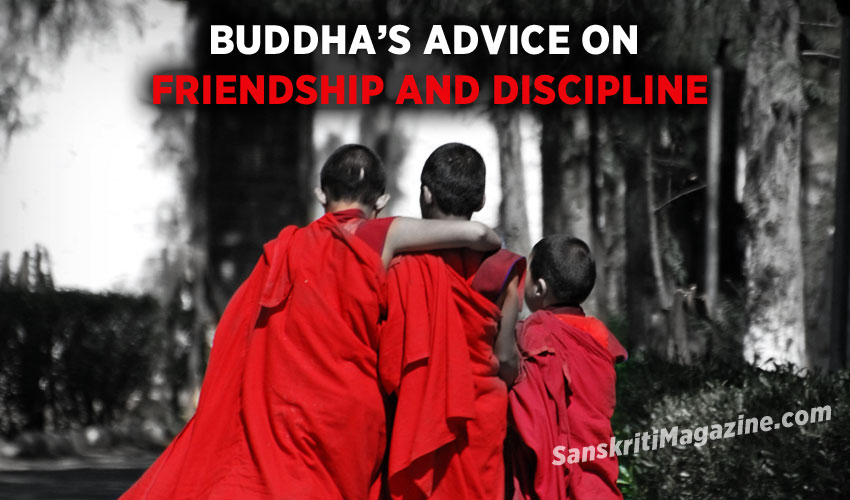 Buddha in one of his sermons, “Sigalowada Sutta” tells a young man named ‘Sigala’ about the discipline a laymen should have.

This takes place when Lord Buddha encountered a youth called Sigala in his morning stroll. The young man, in drenched attire, prostrated and worshiped the four compass direction (East, South, West and North), plus the Earth (Down) and the Sky (Up). When asked by Lord Buddha why he did so, the youth Sigala replied that he had been told by his late father to do so and he thought that it was right to uphold his father’s wishes. Lord Buddha then, based on Sigala’s point of view, taught him on how a noble one (Pali: ariya) should worship the Six directions.

The four defilements of action:

The four causes of evil action:

The six ways of squandering wealth:

The Buddha then went into detail on the importance of having and being a true friend, as he described who true friends are; and who are not; and, how true friends will aid in attaining a blissful life.

According to Buddha, there are four types of true friends:

b)     The friend who treats his friend equally, both in health & misfortune – Guards the friend’s secrets as his own as well as tells all his secrets to him, doesn’t leave the friend in trouble and ready to sacrifice even his life for the friend.

c)      The friend who shows the correct guidance – Shows the way to a good life not only in this world, but, in the world after death. Prevents the friend from committing sins and shows the way to a better world by advising him on subjects he is ignorant of.

d)     Compassionate friend – Shows compassion to the friend like his mother and prevents others from criticizing him. Praises those who commend him. Happy at the friend’s success and sad at his failure.

According to Buddha there are four types of bad friends who act like friends, but in truth, are enemies:

a)The bad friend who becomes friendly to take, not give – Helps a little and wish for more. Formulates a friendship when he is in trouble to get out of it. He associates a friend only for his gain.

b) The bad friend who talks big and treat his friends only with words – He never ever assists a friend when in need. Tells about his own problems and evade helping the friend.

c) The bad friend who sides with his friend just to make him happy without thinking the consequences of the act – He approves and support his friend in all his deeds whether they are good or bad; but criticizes him behind his back.

d) The bad friend who gets friendly to do sins – He associates the friend to indulge in intoxicants, gambling and attend public shows frequently. Thus, taking his friend with him to the hell after death.

Finally, returning to the topic of the six directions, the Buddha described the Four Compass Directions as :

The two vertical directions as:

Ascetics and Brahmins (Up)

The householder’s commitments and the reciprocal acts of those he honors, which make those directions protected, peaceful and secure as identified by the Buddha

Duty of the householder:

Reciprocal acts of the parents:

Duty of the student:

Reciprocal acts of the teachers:

Duty of the husband:

Reciprocal acts of the wife:

Duty of the householder to his friends:

Reciprocal acts of the friends:

Up : Ascetics and Brahmins

Duty of the householder to Ascetics & Brahmins:

Reciprocal acts of the Ascetics & Brahmins:

Duty of the householder to servants:

Reciprocal acts of the servants :

• To avoid domestic violence and lead a peaceful life one should follow the path of Buddha’s teachings. It is the greed and desire which bring all the problems into this world. The ignorance of this reality, according to Buddha, cause all the tribulations in a human’s life.

• Meditation brings peace to mind and teach tolerance. The Buddhist culture basically teaches a person to feel guilty and be fearful of the outcome of such a deed.

• Buddhists, believe in the theory of action and reaction. It is one’s actions which bring the result of their existence. It could be peaceful and harmonious or messy and disastrous.

Touching the Earth Mudra and Time
A Life of Miracles
Comment