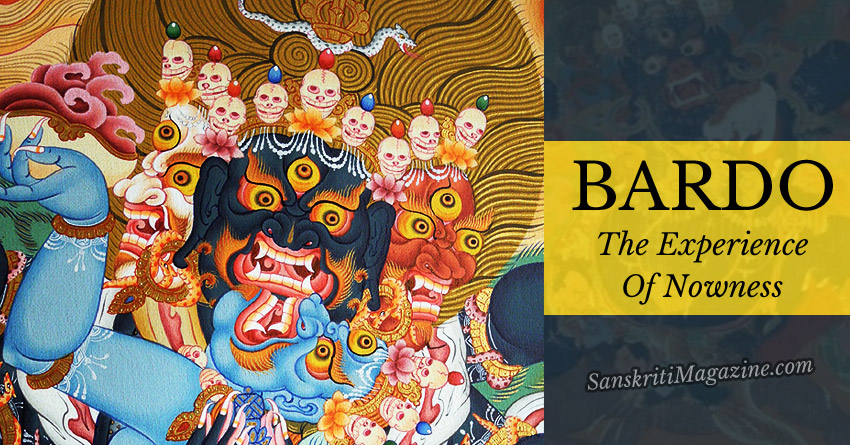 Originally bardo referred only to the period between one life and the next, and this is still its normal meaning when it is mentioned without any qualification. Later Buddhism expanded the whole concept to distinguish six or more similar states, covering the whole cycle of life, death, and rebirth.

But it can also be interpreted as any transitional experience, any state that lies between two other states. Its original meaning, the experience of being between death and rebirth, is the prototype of the bardo experience, while the six traditional bardos show how the essential qualities of that experience are also present in other transitional periods. By refining even further the understanding of the essence of bardo, it can then be applied to every moment of existence. The present moment, the now, is a contin­ual bardo, always suspended between the past and the future.

Bardo can have many implications, depending on how one looks at it. It is an interval, a hiatus, a gap. It can act as a boundary that divides and separates, marking the end of one thing and the beginning of another; but it can also be a link between the two—it can serve as a bridge or a meeting place that brings together and unites. It is a cross­ing, a stepping-stone, a transition.

It is a crossroads where one must choose which path to take, and it is a no-man’s-land belonging to neither one side nor the other. It is a highlight or peak point of experi­ence and at the same time a situation of extreme tension caught between two opposites. It is an open space filled with an atmosphere of suspen­sion and uncertainty, neither this nor that. In such a state, one may feel confused and frightened, or one may feel surprisingly liberated and open to new possibilities where anything might happen.

Such moments as these occur continuously in life, unrecognized; this is the inner significance of the bardo states as the Tibetan Buddhist teacher Chögyam Trungpa Rinpoche taught. He spoke of them as periods of uncertainty between sanity and insanity or between the confusion of samsara and the transformation of confusion into wisdom. “They are the heightened qualities of differ­ent types of ego and the possibility of getting off ego. That’s where bardo starts—the peak experience in which there is the possibility of losing the grip of ego and the possibility of being swallowed up in it.”

Wherever there is the death of one state of mind, there is the birth of another, and linking the two there is bardo. The past has gone and the future has not yet come; we cannot catch that in-between moment, yet it is really all there is. “In other words, it is present experience, the immediate experience of nowness—where you are, where you’re at.”

According to this tradition, the six bardos are:

Other traditions recognize some additional ones, but the principle is the same. The bardos are distinguished from each other in this way because they indicate different modes of consciousness, just as the waking consciousness differs from the dreaming consciousness.

These states can last for a short or long period of time, as long as a whole lifetime in the case of the first one, yet they all share the mysteri­ous and immensely powerful quality of “in-betweenness.” Or we could say that, by learning to see these stages of our lives as bardos, we can gain access to that power, which is always present, unnoticed, in every moment of existence.

~ Francesca Fremantle, excerpted from Luminous Emptiness: Understanding the Tibetan Book of the Dead.