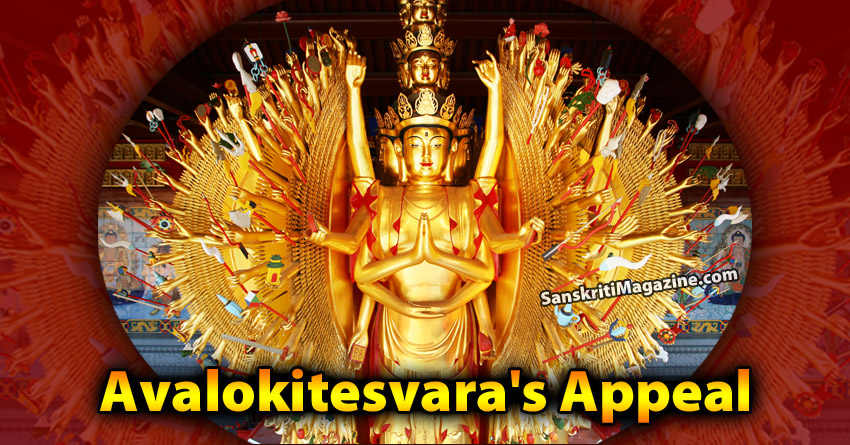 Avalokitesvara is the most popular Mahayana Bodhisattva and his cult has played an important role in the growth of Mahayana Buddhism and art. The Mahayanists worship Avalokitesvara as a merciful and with fulfilling god. He is the god of Universal Compassion.

Avalokitesvara is referred to as a Bodhisattva mahasattva (great being) because he is a guide to other aspiring Bodhisattvas.  He is said to possess great compassion (mahakaruna), loving-kindness (mahamaitri), and is endowed with the 32 marks of the cosmic person (mahapurusha).  He preaches the truth of the dharma, and selflessly takes on the suffering of all.

Avalokitesvara is an emanation of Amitabha.  Amitabha is a Buddha of boundless light and infinite qualities.  Amitabha introduced an easy way of salvation – he advocated that the recitation of his name could save the devotees from the bondage of birth and death.  One who recites his name even once before his death goes to his paradise called the Sukhavati where there are no mental or physical afflictions.  Avalokitesvara is the best exponent of Amitabha’s doctrine of grace.

The name Avalokitesvara is a combination of two words: Avalokita and Isvara.  Avalokita in Sanskrit means: seen, viewed, observed, etc.  It can be used in all genders, masculine, feminine and neuter.  Isvara means lord or master.  So the word Avalokitesvara should mean the lord of all that is seen, comparable to Siva’s epithet drishtiguru.  Avalokitesvara is generally regarded as the god who, like Buddha surveys the distress of all beings.

Tibetan Buddhists look upon Avalokitesvara as one with “glancing eyes of sympathy”. In China Avalokitesvara is known as Guan-yin (yin means voice).  Therefore the last part of the name of the deity may be Svara and not Isvara.  So Guanyin should be rendered into Sanskrit as Avalokitesvara, meaning one who hears or listens to the cries of the sufferers.  The early Buddhist monk Sanghavaraman translated the name Avalokitesvara as Kuan-shi-yin, i.e., the one who heeds cries (for help).  Sanghavarman’s translation is corroborated by a fragment of manuscript of the Saddharma Pundarika discovered in Central Asia by Count Otani.  The learned Buddhist monk Kumarajiva (400 A.D.) has also treated Avalokitesvara as Guan-shi-yin.  However, the name of Avalokitesvara is also used in China as indicated by the Chinese term “Kuan-tzu-tsai”.  “Tzu-tsai” or “Isvara” is the habitual Buddhist way of referring to the self-existent god Siva.

However peculiar or intriguing the name, `Avalokitesvara’ may be, his functions are well defined.  There are three distinct stages in his growth.  At first or originally, he was a member of trinity, consisting of Amitayus, Avalokitesvara and Mahasthmaprapta.  As Edward Conze has stated, this trinity has many counterparts in Iranian religion, i.e. in the Mithra cult, and in Zervanism, a Persian religion which recognized Infinite Time (Zervan Akarana-Amita-Ayus) as the fundamental of this, Avalokitesvara gained an image as one who had great miraculous powers to help devotees overcome dangers and difficulties.  This shows the second stage of development in the character of Avalokitesvara.  In the third or final stage he attained the status of an independent deity with many cosmic features and functions.  He is said to hold the world in his hand.  In each pore of his skin is concealed a world system.  His essence pervades the whole world.

The earliest conception of the Bodhisattva Avalokitesvara is to be found in the Mahavastu Avadana (2nd century B.C.) where the deity is described as the `Bhagavan’ who takes the form of Bodhisattva.  Avalokitesvara took concrete shape in the 24th chapter of the Saddharma Pundarika (c. 2nd century A.D.), the nucleus of which goes back to the first century A.D. This is supported also by the fact that Nagarjuna, a contemporary of Kanishka (2nd century) and the author of Madhyamika aphorisms, in one of his works, mentions Amitabha and Avalokita.  Thus it appears that the worship of Avalokitesvara was in vogue in 2nd – 3rd century A.D. This is corroborated by the Kushan art showing Avalokitesvara from Gandhara.  The Saddharma Pundarika is a unique text, which was popular in India, Tibet, Central Asia, China and Japan.  The work is said to have been first translated into Chinese in 223 A.D.

Taranath, the Tibetan Buddhist scholar (16th century), assigns comparatively high antiquity to Avalokitesvara.  He records that Panini (who on no account can be placed later than the 6th century (B.C.) got a vision of Avalokitesvara and the god helped him in writing his grammar.  This seems to be incredible in view of the fact that Avalokitesvara is a Mahayana deity and this form of Buddhism did not come into existence earlier that the 1st century.  Taranath was perhaps led to believe in the high antiquity of Avalokitesvara as he is described in certain Mahayana texts as eternally existent.

The Karandavyuha (4th century A.D.) while not ignoring, the gracious aspects of Avalokitesvara, mentions his other attributes and qualities.  The apotheosis of Avalokitesvara culminates in identifying him as the spirit of the universe.  His description in Karandavyuha indicates the profound Vedic influence.  TheSukhavativyuha throws considerable light on the character and characteristics of Avalokitesvara.  It describes him as being brilliant purple gold in colour with a turban at the back of which is a halo. The circumference of his hallo is a hundred thousand yojanas.

Short references to Avalokitesvara occur in several texts including the Kavindravachana-Samuchchaya, which contains some verses in his honour.  He is praised also in the Lokesvarasataka of Vajradatta who flourished during the reign of Devapala of Bengal (9th century).  In the Harsha Charita of Bana the world `Avalokitesvara’ occurs as an adjuctive to the Buddhist monk Divakaramitra.  It may mean that, though a Buddhist, Divakaramitra saw the vision of Isvara, i.e. Siva.  This clearly shows that there took place a synthesis of Buddhism and Saivism during the seventh century.

Apart from Avalokitesvara’s affinities with Buddha.  Avalokitesvara absorbed the traits of many other Hindu gods.  From the name `Avalokitesvara’ it appears that the Mahayanists wanted to assign him also the role of a creator, `Isvara’ in the context of Avalokitesvara may signify that he was not only the lord of the visible world, but also its creator.  It has been noticed earlier that the creation of the world and the direction of its affairs were left, according to Nepalese Buddhism to his charge, by the Dhyani Buddhas.

The worshippers have conceived Avalokitesvara in various forms corresponding to his diverse activities.  In iconography he is endowed with two arms, four arms, six arms, eight arms, even a thousand arms and eyes representing various ideas and forms associated with him.

Different centres of Eastern India, Nalanda and Kurkihar from Bihar, Lalitagiri and Ratnagiri from Orissa, Mahoba from central India and Kanheri and Ajanta from Maharashtra and also Alchi from Ladakh have yielded some very unique images of Avalokitesvara. Avalokitesvara from Ajanta is full of grace and beauty.  From Kanheri the eleven-headed Avalokitesvara is very important from the standpoint of the development of Avalokitesvara iconography.

The image of eleven-headed Avalokitesvara at Kanheri is the singular sculpture of its kind, which shows the superb illustration of the imagination of learned Buddhist philosophers and the exquisite skill of the artists.

It is interesting to note that Avalokitesvara has been described as Ekadasasira (eleven-headed), in the Gunakaranadavyuha.  It may be a conversion of the eleven violent gods of the Vedic age, the Ekadasa Rudra of Brahmanism.  This literary evidence is well corroborated by artistic testimony also.  South India too has produced some interesting Avalokitesvara figures, especially from Nagapattinam.

The cult of Avalokitesvara spread also to various Buddhist countries outside in India. China deserves a special mention.  Apart from Buddha, no other Indian deity has perhaps such a great appeal as Avalokitesvara.  No other deity in the world shows such a vast visual variation.