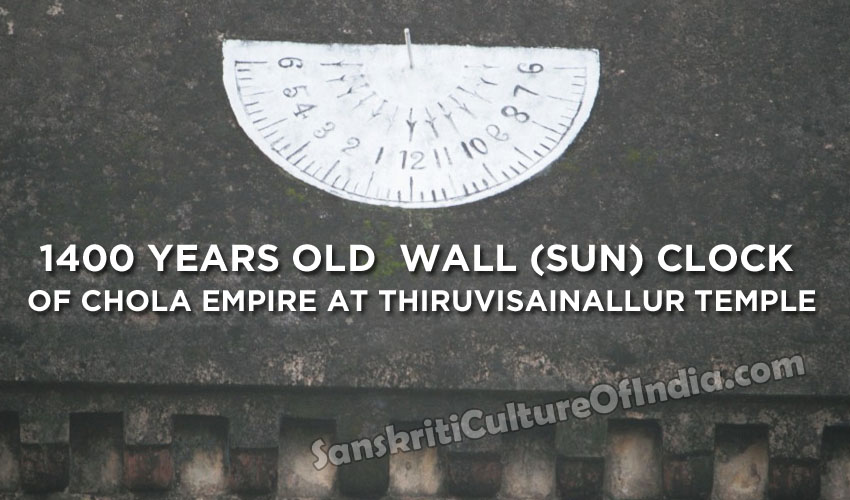 Kingdoms and kings are history, but certain devices bequeathed by them tell the story of their times. One such historical instrument is the 1,400-year-old sun clock mounted on the 35-feet-high inner wall of  Sivayoginathar temple at Thiruvisainallur, some 12 km from Kumbakonamin Thanjavur district. It is the only ‘wall clock’ in Tamil Nadu in the real sense of the term.

The temple authorities have decided to refurbish the historic legacy which stands testimony to the infinite wisdom and scientific temper of the Chola kings.

The wall clock built during Parantaka Cholan’s rule does not require battery or electricity. Carved out of granite and shaped like a semi-circle, all it has is a three inch-long brass needle permanently fixed at the centre of a horizontal line. As the sun casts its rays on the needle, the shadow of the needle indicates the right time. The people, mostly the devotees coming to the temple, deciphered the time of the day by watching the silhouette cast by the needle of the sun clock from six am to six pm, and perhaps planned their day accordingly.

Expectedly, time has taken its toll on the sun clock at the sixth-century temple. The clock will work as long as the sun shines because of its unique working principle. But due to brass discoloration, the needle is getting blurred on the granite surface.  The numerals were added by British for their own convenience which still exists.

The clock will get its face lift when the temple managed by the Thanjavur Palace Devasthanam undergoes renovation at an estimated cost of Rs 46 lakh. “The time that the sun clock shows may not be expedient today, but its history is,” said Aru Ramanathan, the grandson of Devakottai ARM ALA Arunachala Chettiyar who did the first renovation after a long gap in time in 1931.

Interestingly, the temple has many a religious significance. The presiding deity Sivayoginathar does not sit with his consort Soundaryanayaki in the sanctum sanctorum as is the case in many temples. The Ambal’s Sannidhi (shrine) is separately situated facing the South where the Sun Clock is mounted. The legend has it that eight Siva Yogis merged with the lingam here after attaining salvation. Hence the name Sivayoginathar for Lord Siva. As Siva is in deep meditation inside, Ambal waits outside for him looking at the Sun Clock.