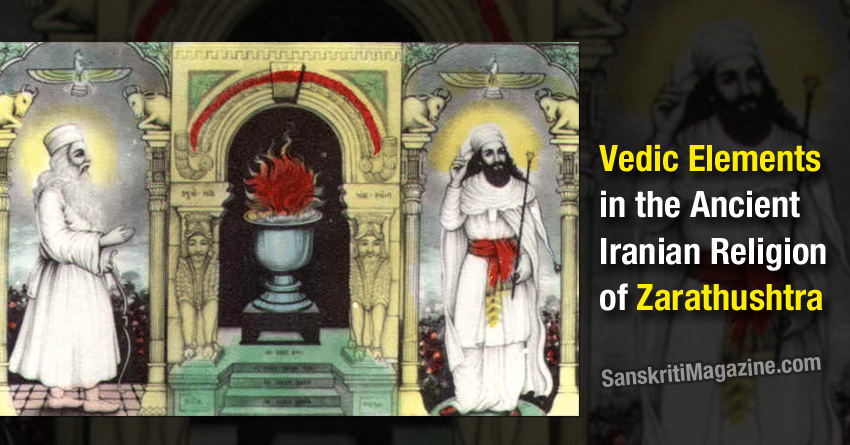 Scholars generally agree that before the advent of Zarathushtra, the religion of the devas was current in Iran. For want of a better term, some have called the pre-Zoroastrian religion Persian paganism.  But here we argue that to do so is to obscure its connections with the Vedic religion. The similarities between the preZoroastrian Persian religion and the Vedic religion are too many to give it any other name.

The term Zoroastrian is after the Greek version of the name of the prophet Zarathushtra (zarat, like Sanskrit harit, golden; us. t.ra, Sanskrit or Old Persian for camel) who has been variously estimated to have lived either around the time 1200 BC or perhaps half a millennium later. A Greek tradition assigns him to an age 258 years prior to Alexander, that is the 6th century BC.  The name by which the Zoroastrians call their own religion is Mazdayasna, the religion of Ahura Mazda (Sanskrit Asura Medha, “Lord of Wisdom”). The Rgveda 8.6.10 has the expression medham rtasya, “wisdom of truth”.

Zarathushtra presented his religion as rival to the religion of the daevas, that is Daevayasna.  Zarathushtra came from Bactria in northeast Iran, near Afghanistan.  The Avesta speaks of several lands that include the SaptaSindhu (Sindhu-Sarasvati region of North and Northwest India).

The scripture of the Zoroastrians is the Avesta. It includes the Yasna (Sanskrit yajna) with the Gathas of Zarathushtra, Videvdat or Vendidad (Vi-daeva-dat, “antiDaeva”), and Yast (hymn), which are hymns for worship. During the Sasanian period the Avesta was translated into Pahlavi and this version is called Zend Avesta.

The Zoroastrians speak of mathra (Skt. mantra) as utterances that accompany meditation. Like the Vedic tripartite division of society, the Zoroastrians have the classes priests (zaotar), warriors (nar), and pasturers (vastar).

It has been assumed formerly that the daevas of the Mazda faith are the same as the Vedic devas and therefore Zarathushtra inverted the deva-asura dichotomy of the Vedic period. In reality, the situation is more complex and the Vedic and the Zarathushtrian systems are much less different than is generally supposed.

From Kashmir, which belongs square within the Vedic world, comes crucial evidence regarding a three-way division consisting of devas, asuras, and daevas. The scheme reflects the three-way division that is basic to Vedic thought. These three divisions in the outer realm are the earth, atmosphere, and the sun; in the inner world they are the body, breath (pran. a), and consciousness or atman. This tripartite classification is mirrored in the gunas of Indian thought: sattva, rajas, and tamas.

Kashmiri folklore has many tales where daevas are counterpoints to devas and asuras. Sometimes the term raks.asa is used as a synonym for daeva. This term raks.asa occurs very frequently in Sanskrit literature. The word raks.as appears in the R. gveda, the Aitareya Brahman. a and other texts; it is also considered equivalent to Nirr. ti. The raks.asa form of marriage is the violent seizure or rape of a girl after the defeat or destruction of her relatives.

It is entirely possible that the term daeva came into Kashmir late as a result of the immigration of Persians. If that were the case, the reason why it took root is because it served as a synonym for an existing idea. It is equally possible that the term has been current in Kashmir from ancient times and its usage there parallels that by Zarathushtra from the nearby Bactria. Further support for this view comes from the fact that the Kashmiri Hindus, who have remained isolated from any Persian immigrations of the last few centuries, follow many practices that are prescribed for Zoroastrians. These include the sacred thread for women (called aet.apan in Kashmiri) and the sacred shirt (sadr).

The Vedic view of seeing the world in triple categories was in the later Puranic gloss simplified into dichotomies like that of deva versus asura (including raksasa). Zarathusthra made a similar simplification using the dichotomy of asura (including deva under the label yazata) and daeva. The asuras are the ground on which the devas emerge.  The Zarathushtrian reduction is not particularly different from the Puranic.

In this essay, I summarize the general structural and nomenclatural similarities between the Zoroastrian and the Vedic systems. I hope to show that the Zoroastrian innovations on the prior Vedic system in Iran have parallels in the adaptations that were taking place in India in the Puran. ic period. But Zarathushtra’s emphasis on a sharp dichotomy between good and evil gave rise to an aesthetic and an approach that was quite unique.

Here is a list of divinities that are included by the Zoroastrians amongst the forces of the good where I provide the corresponding Sanskrit spelling within brackets:

The supreme God of the Zoroastrian faith is Ahura Mazda (Asura Medha). He is self-created, omniscient, omnipresent, holy, invisible, and beyond human conceptualization. In Yast 1, Ahura Mazda proclaims:

My sixth name is understanding;
my seventh is Intelligent One;
my eighth name is Knowledge;
my ninth is Endowed with Knowledge;
my twentieth is Mazda (Wisdom).
I am the Wise One;
my name is the Wisest of the Wise.

This is reminiscent of Purusa in the Vedas. The Cosmic Purusa projects on the three planes of the heavens, the sun, and the earth into the Visve Devah, Indra, and Agni. Likewise, Ahura Mazda projects his power of good through the Amesha Spenta (Immortal Energy).

The first three are conceived of as masculine beings, the last three as feminine. The division of the six Amesha Spentas in three classes, with masculine and feminine forms, appears to parallel the projection of the power of Purus.a into divinities in the three planes of Mind, Law, and Kingship.

Many deities are identical in the Zoroastrian and the Vedic systems. Some can be recognized by noting the peculiar sound transformation in going from Sanskrit to Avestan such as asa obtained from rta.

The Vedic deities are conceived within the framework of the bandhu between the astronomical, the terrestrial, and the physiological and the spiritual.  There seems to be a similar conception behind the Adorable Gods (Yajatas) since they include several stars such as the Pleiades, Sirius, and Vega.

Mitra and Bhaga are two of the Adit yas, names of the Sun, in the Vedas. The other Adit yas from a late list are Indra, Aryaman, Vivasvant, Visnu, Parjanya, Varuna, Dhatr, Pusan, Amsu, and Tvasta.

Since Mitra and Varuna are dvandva partners in the Vedas, the omission of Varuna from the Zoroastrian lists indicates that Zarathushtra was from the borderlands of the Vedic world where the Vedic system was not fully in place. This would also explain the omission of divinities such as Visnu and Rudra.   Likewise, it explains why the names of the Pleiades (Krttika in Sanskrit) are very different: Paoiryaenı.

But since Varuna is mentioned in the Mitanni documents, it is clear that the pre-Zoroastrian religion in Iran included Varuna.

It is remarkable that Baga (Skt. Bhaga), the pre-Zoroastrian name of God in Iran, is not listed amongst the Yazatas. This omission may be a consequence of the adoption of a new divinity, Ahura Mazda, in place of the old one.

The Zoroastrian innovations did not change the basic Vedic character of the culture in Iran. The worship ritual remained unchanged as was the case with basic conceptions related to divinity and the place of man. In disease the Zoroastrians speak of Aesma in place of Yaksma.

Only Parliament can decide on scrapping Article 370: Supreme Court
In the age of Charlie Hebdo, isn’t an ink attack civilised protest?
Comment