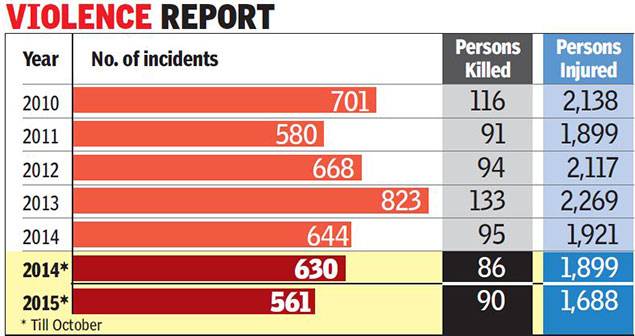 NEW DELHI: Notwithstanding the ‘intolerance’ debate, lesser people have died in communal incidents this year as compared to 2014.While 86 people were killed until October this year, communal violence claimed 90 lives in the corresponding period of 2014.

However, the total number of communal incidents till October witnessed a rise this year with 630 incidents being recorded as compared to 561 incidents in 2014. In 2013, when the UPA was in power, the corresponding figure was 694 incidents, though that was largely on account of the Muzaffarnagar riots that claimed 65 lives.

The home ministry maintains that unlike 2013, when two major incidents at Dhule (Maharashtra) and Muzaffarnagar resulted in a total 70 deaths and injured over 100, there was just one major incident in 2014 (in July, when NDA was in power) at Qutubsher in Saharanpur, UP, that left 3 persons dead and injured 23. In 2015, however, there has been no major communal incident so far, it adds.

The home ministry, in a written note shared with members of the parliamentary standing committee on home affairs last week, said there was just two “significant” incidents until October this year. While the first involved a feud over construction of a place of worship in Atali, Faridabad, Haryana, the second was the lynching of a Muslim youth in Bisahda village of Gautam Budh Nagar, UP, over allegations of “slaughter of a banned animal”.

Incidentally, there were 56 incidents in October, while the Bihar elections were underway and the “intolerance” debate came to dominate political discourse. These incidents resulted in 11 killings and left 126 injured. This is close to the monthly average of 54 communal incidents reported in 2014 but far less than the 68 incidents recorded in 2013, when the UPA was in power. It be recalled that the Muzaffarnagar riots were primarily responsible for the higher communal violence and casualties witnessed in 2013.

The home ministry had in its note circulated to members of the parliamentary standing committee listed misuse of social media as one of the main causes for communal conflicts, the other being religious issues, gender-related issues, land and property disputes and political rivalry, etc. According to the ministry, there were increasing instances of misuse of social media and mobile applications for circulation of objectionable, blasphemous and derogatory contents that hurt religious sentiments of communities. “Besides creating bitterness and communal harmony on several occasions, such content in cyber-space led to violent protests and also resulted in fatalities and loss of property,” it stated.