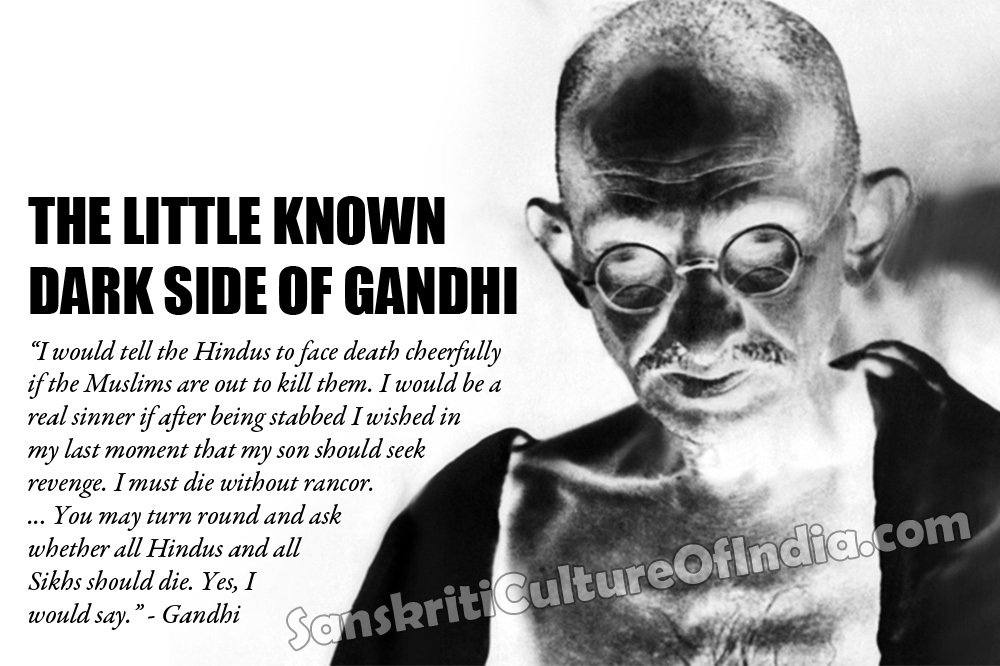 THIS POST IS IN RESPONSE TO  WHY I KILLED GANDHI

After posting the final address of Nathuram Godse to the court earlier I received a few too many crude and abusive comments/messages. There is no denying that Gandhi contributed a lot in the freedom of India but we cannot just brush away his negative approach towards the Nation in spirit of so called “patriotism”, especially when most of us only know the half-baked “truth”.  Have we become so closed minded and coward that we don’t even dare to question the popular belief? Are we so illiterate, fanatic and hardcore that if someone put facts ahead then all we can do is retaliate to counter with all available force!? Well it is a shame that a Nation which gave so much to the World is deprived of all that makes a Nation and society strong and sane!  I am neither a Gandhi bhagat and nor against him, but facts are facts – no one can deny them. So, going forward I decided to put up some very unknown facts and statements made by Gandhi.

Though Gandhi was an orthodox Hindu even he went against the sentiments or the feelings of the Hindus in order to maintain communal harmony. The famous Vande Mataram’ song had proved an inspiration during those days. Bengali community almost worshipped the song. But when Jinnah, the president of Muslim League and a handful of his follower Muslims objected, disregarding the nationalist sentiment of the song, Gandhi put a ban on it and forced the whole nation to abandon it. In 1940, Congress announced a decision that the words Vande Mataram’ should not be used by Congress members in any public speeches and announcements.

Gandhi also put a ban on Shiv Banvani. Shiv Banvani is a small inspiring poem by poet Bhushan. The poet had written that if Shivaji had not been born, entire India would have been converted to Islam. The poet had used exact words to correctly depict the fierce fanaticism and intolerance preached within Islam. Gandhi imposed a ban on this poem to keep the sentiments of his Muslim brothers’.

“If the peaceful non-cooperation movement does not succeed in getting justice, then, they have the right to follow the path shown in the Holy Books of Islam and I whole-heartedly support this path.”

Gandhi whole-heartedly supported the Khilafat Movement in order to bring Hindu-Muslim unity. When the Indian Muslims invited the Amir of Afghanistan to attack India and to convert this Darul Harb into Darul Islam, Gandhi supported this move also. Once, when he went to Delhi he held his prayer meetings in a Hindu temple in the sweeper’s colony. Ignoring the strong protests of the priests he adamantly read few passages from the Koran as part of the prayer meeting inside the Hindu temple.

In 1947, millions celebrated the independence that they had won through decades of struggle. But the year was also marked by a holocaust of violence and ethnic cleansing that accompanied Partition. Seventeen million people were forced to migrate and 1 million people were killed. Hundreds of thousands of corpses littered the streets of cities like Calcutta and Delhi.  There are descriptions of train cars arriving full only of dead people.

While riots raged in Punjab, Gandhi told a leader of the Muslim League:  “I want to fight it out with my life. I would not allow the Muslims to crawl on the streets in India. They must walk with self-respect.”

At the time of India-Pakistan partition violent Hindu-Muslim riot took place. Millions were uprooted from their ancestor’s territory and massive violence and slaughter occurred on both sides of the border. At the lowest estimate, one million people perished and fourteen million became homeless. When hundreds of thousand Hindu and Sikh refugees entered India, Gandhi showed utmost sympathy for them. Gandhi said:

“I am grieved to learn that people are running away from the West Punjab and I am told that Lahore is being evacuated by the non-Muslims. I must say that this is what it should not be. If you think Lahore is dead or is dying, do not run away from it, but die with what you think is the dying Lahore. When you suffer from fear you die before death comes to you. That is not glorious. I will not feel sorry if I hear that people in the Punjab have died not as cowards but as brave men.”

Gandhi presented an Ahimsa formula to the Hindu refugees. He advised the Hindus: “The Hindus not to die helplessly. But they are to die without a murmur. Only then the riots will stop.”

In another incident, Gandhi addressed the homeless Hindus at the end of one of his Prayer Meetings and said, “After all, who are the killers ? They are our Muslim Brethren, none other. Does a converting into another religion break the bond of brotherhood ?”

In a speech on April 6, 1947; Gandhi again advised the destitute Hindus, “Even if Muslims decide to wipe out the Hindu race, there is no point in Hindus getting angry on Muslims.Even if they slit our throats, we should be patient and accept death. Let them rule the world, we will pervade the world and merge with it. At least we should not be afraid of death. The providence is made of life and death. Why feel unhappy about it ? We will enter a new life if we face death with a smile. We will create a new Hindustan [India].”

On September 23, 1947, during a prayer speech, Gandhi said, “[Even if Muslims] killed our relatives, our people, why should we be angry with anyone ? Those who got killed met with a proper end. We should know that they attained heaven. Let this happen with Gods’ wish with each one of us. God should grant us this kind of death. If you want to ask God for anything, let it be this.”

On Muslim slaughter of Hindus and Sikhs, Gandhi elsewhere said. “I would tell the Hindus to face death cheerfully if the Muslims are out to kill them. I would be a real sinner if after being stabbed I wished in my last moment that my son should seek revenge. I must die without rancor. … You may turn round and ask whether all Hindus and all Sikhs should die. Yes, I would say.  Such martyrdom will not be in vain.”

The Origin of Dowry System
Why I Killed Gandhi
Comment