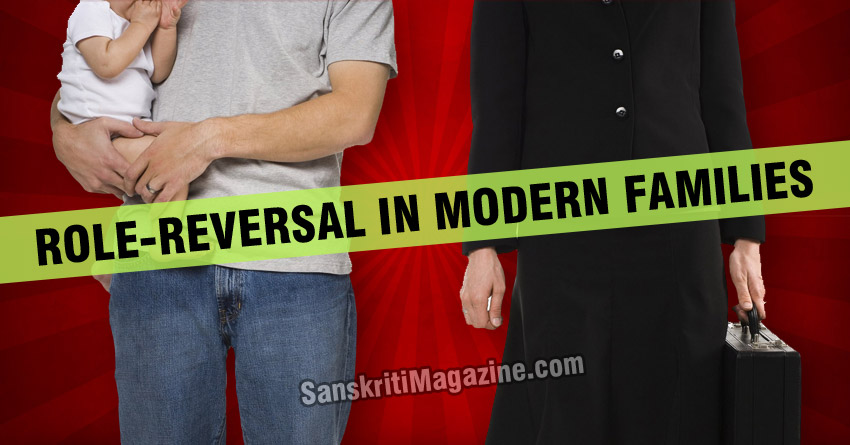 Disoriented psyche and ruthless competition between men and women has led to their role reversal within the family. Yester year’s hero ‘He Man’, the protector and provider as head of a family, today, willingly performs the role of ‘diaper-changing’ Dad. And yesterday’s loving and caring ‘lady of the house’ scares all family members. She can make or mar the peace of the whole family within no time – it depends on her mood. Munshi Premchand, a famous Hindi novelist commented that when a man acquires the qualities of woman, he becomes a ‘Devta’ (just like God). On the contrary if a woman apes man, she can very easily destroy the peace of a family.

Dr. Konner, a professor in anthropology at Emory University, says in his book, “Women After All” that “Women are, in every way that matters, superior to men and moreover, that this superiority is finally becoming evident in our societies.” In making this argument, he ranges from evolutionary biology, through ethology, neurobiology, embryology, anthropology and history, with digressions into economics and politics.” …. “They live longer, have lower mortality at all ages, are more resistant to most categories of disease and are less likely to suffer from brain disorders that lead to disruptive and even destructive behavior. And of course most fundamentally they are capable of producing new life from their own bodies, a stressful, and costly burden in biological terms, to which men literally add only the tiniest biological contribution – and one that in the not-too-distant future could probably be done without.” In addition, women’s superiority in judgement, their trustworthiness, reliability, fairness working and playing well with others relative freedom from distracting sexual impulses and lower levels of prejudice, bigotry and violence make them biologically superior. If so, then where is the problem?

Modern woman has already broken all glass-ceilings, moved forward and joined ‘man’ in nation-building activities. She works shoulder-to-shoulder with man. She has proved her worth and is second to none in  any sphere of work, be it industry, politics, social works and social reforms, managers, civil services, armed forces etc. which are far away from her traditional role of a home-maker. Despite all that, she can not resist her attraction towards the opposite sex and enters into family life along with him.

Earlier in twentieth century, main issues of women were of physical strain, constant psychological pressures to conform to socially induced images of femininity – to be a good wife, perfect mother, efficient home-maker. Their concerns revolved around issues like dowry, domestic violence, rape, equal opportunities and equal pay etc. Now many liberated females focus their attention on teaching males a lesson, prove their worth/superiority in those areas as well, which were earlier regarded as man’s domain and be ahead of them everywhere.

Keeping balance in femininity and ambitions

Modern way of thinking, technological advancements, info-tech revolution has changed the role of women. Along with it changed her perspective, ambitions and equations with others. Economic independence has made them stronger, more confident and more vocal. Now they are aware and well-informed about their needs, problems and solutions. For a modern woman, both family and career are equally important in life. At every stage of life, she has to face many challenges.  To face them courageously, she has maintain a balance between femininity and her ambitions. Balancing career with familial responsibilities is a tough job, but a very crucial one in woman’s life. She needs to set priorities rationally after analyzing what is more important ‘right now’. She has to make many compromises. Most of women compromise on the home front.

But in her hurry to win the race and further her career, sometimes a modern young woman overlooks her social/familial responsibilities. She desires for freedom, liberty and carefree life-style, as usually men used to enjoy in the past. She feels more comfortable outside her home, and prefers to think, act or behave like men and be away from home as long as possible. And to compensate her absence at home, her male counterpart is taking up the responsibilities of household chores, in addition to earning and financially supporting the families.

Such an attitude has taken away sheen from the centuries old social institution known as ‘family’. Till now, ‘family’ has been giving refuge toddlers under the loving care of mother and emotional support to all – young as well as old members of the family. The toddlers are now sent to nursery, pre-school, children to schools and hobby-classes. Older generation has to take shelter in old-age homes. It has developed insecurity in minds of children, adolescents and old people.

Immediately after independence, in 1950′s, free young India embodied a liberal and inclusive vision of India. People understood and interpreted liberally the problems of caste, gender, community, rural-urban areas, meaning of social-economic-legal justice and attempted to resolve the issues rationally.

1950′s and 60′s was the time, when society was in general conservative, attitude hardly rebellion against social norms, talks being all about sacrifice. 1970′s and 80′s was the period of transition, when though people were still family and society-oriented, rebellion attitude started. Those were the years of social and political turmoil. Women gradually achieved success in various fields. Gender bias started vanishing.

Women acquired more education, economic and social power on their own without craving for any concession unlike other so-called weaker sections of society like SCs, STs or OBCs. A new wave swept across the woman’s world – many young women joined the workforce becoming students, teachers, administrators or activists in different social movements. With it, gender relationships and norms have undergone a sea-change because of changed socio-economic atmosphere and a change in expectations. It has ironically increased conflicts.

In 1990′s, rebellion attitude became dominant. Family and society were considered major obstacles on the way to progress. In matter of employment, it is not so difficult for women to ` get jobs as it was earlier. Women were placed more or less on equal footing with men.

As movement of women’s lib along with the ideas like “I will do what I want”, “I do not care for anybody” is gaining momentum, the workload on men is increasing – in rearing up infants and toddlers is increasing and doing other household chores. A drastic transition is taking place in the roles of both males and females within family. Man now shoulders more household responsibilities than his counterpart. Also his say in family matters is diminishing. Usually voice of the lady of the house prevails, men finds himself helpless.

“Who wears the pants in the family”?

Now a days, women plays a major role within the family, assumed almost all the rights to take all major decisions and to dictate her own terms. She does whatever she wants to do and enjoys life in her own way. There is no denial to the fact that full freedom should be given to women to make her own decisions and to lead her life the way she wants. But it should be done in a  decent and civilized manner by exercising some amount of self-control and self-discipline, so that her actions does not adversely affect the feelings or living of other family-members.

For many modern young women nothing, but ‘self’ matters in life. They pay more attention to grab as much power and money as they can, further their career. In many cases, they desire to set themselves free from all bondage of kinship. Some of them prefer to go far away from their native place to enjoy more freedom and settle down in unknown places or in foreign lands, where they do not have any social pressure, lead their life, the way they want, get total control over activities of their spouses and enforce on everybody in the family their own dictats/rules.

“Men from Mars, women from Venus?”

Thinking, working style, personal qualifications and abilities and sense of responsibility differ from person to person. It does not necessarily depend on one’s ‘gender’. It is unfair to generalize attributes of men-women on gender ground. Still it is difficult to ignore gender gap, that nature has created in their physique,  mindset, style of working and attitudes. It is difficult for a woman, how-so-ever hard she tries to bring to an end those inherent dissimilarities bestowed by nature itself. Mostly men are by nature more rational/sensible, more focused, faster in taking decisions or actions, less reactive and considerate. They have more physical strength, energy and authority. It is difficult for a woman ignore the charm of his physical strength and his ability to provide her and her family security – as a husband, father or son. As far as women are concerned, they are more loving, more caring and more social and maintain harmonious relationship with people around them. They have understanding and capacity to think practically. They are more attractive. However, sometimes the confidence gap in females tend them to look up to their male counter-parts to boost up their morale.

Roles of men and women in family are complementary, not competitive –  Healthy relationship between husband and wife makes the world more colourful, comfortable and give each other purpose of life. It gives them incentive to work hard, move forward and make everybody happy within the family.  But when they work on impulses and emotions, life becomes difficult for the whole family, as it is practically impossible for an impulsive mind to think rationally.

‘Togetherness’ be the principle –

Seeing the strengths and weaknesses of both the sexes, it can be said that roles of men and women within a family and society are complimentary and not competitive. A women should not try to ape, act or behave like a man.There is much more grace in femininity.

No one should try to impose one’s superiority on the other. Both should accept life as it comes, mould their mind-sets to meet together the challenges in life. Both husband and wife, the main pillars of the family life, are supposed to supplement each others weaknesses and become a stronger unit to give required support to other dependent members of the family. Harmonious relationship between man and woman makes life interesting, enjoyable and worthwhile for themselves as well as for everybody else in the family and society.

God gave me a brain, so I made the most of it: Man with cerebral palsy
Over-Unity Reactionless Generator Invented In India
Comment