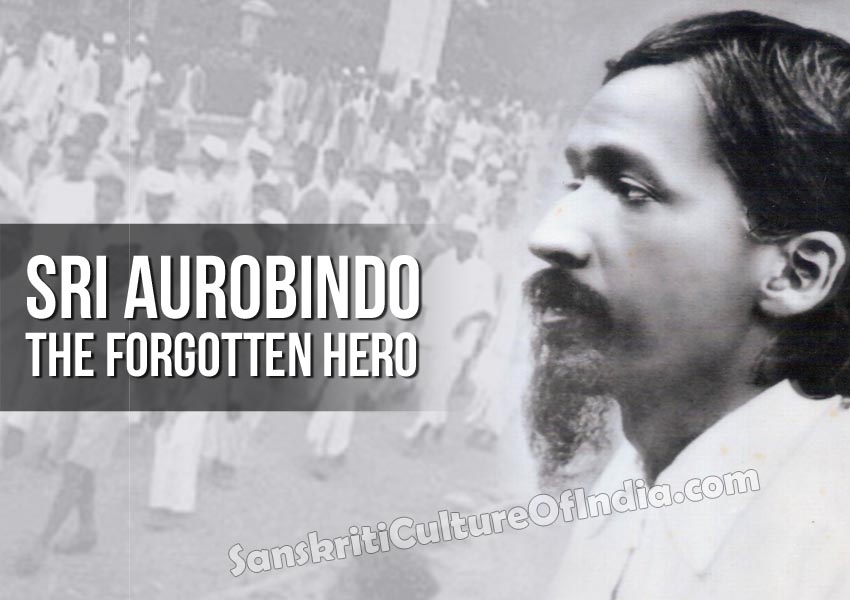 Sri Aurobindo was born on the 15th August 1872 in Calcutta, he spent his first years at Rangpur (now in Bangladesh) and at the age of 5 is sent to Loreto Convent school in Darjeeling. His father, who wants him to have a thorough Western education, packs him then to England, where he enters St Paul’s School in London in 1884 and King’s College, Cambridge in 1890. Sri Aurobindo is a brilliant student and passes the I.C.S., but “fails” to appear for the riding test and is disqualified. After 13 years in England Sri Aurobindo returned to India on February 6, 1893 at the age of 20. He joined the Baroda State Service from 1897 to early 1906 and taught French and English at the Baroda college, before eventually becoming its Principal. 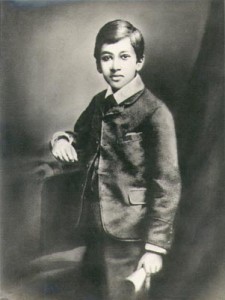 It was at that time that he started writing a series of articles “New lamps for Old” in the Indu Prakash, a Marathi-English daily from Bombay. Sri Aurobindo realised quickly that passive resistance, constitutional agitation “a La Congress”, was not the right path to achieve an independent India. In the true spirit of a yogi, he re-enacted the Baghavad Gita’s great message: that violence is sometimes necessary, if it flows from Dharma -and Dharma then was the liberation of India. Thus he began contacting revolutionary groups in Maharashtra and Bengal and tried to co-ordinate their action. At Sri Aurobindo’s initiative, P. Mitter, Surendranath Tagore and Sister Nivedita formed the first Secret Council for revolutionary activities in Bengal. But action was accompanied by inner vision: “While others look upon their country as an inert piece of matter, forests, hills and rivers, I look upon my country as the Mother. What would a son do if a demon sat on her mother’s breast and started sucking her blood?..I know I have the strength to deliver this fallen race. It is not physical strength- I am not going to fight with sword or gun, but with the strength of knowledge”.

In 1905, the terrible Lord Curzon partitioned Bengal. This divide-and-rule move was meant to break the back of Bengali political agitation and use the East Bengal Muslim community to drive a wedge between Hindus and Muslims, a policy that was to culminate in India’s partition in 1947. Bengal responded to its partition with massive and unanimous protests in which many personalities took part, such as Rabindranath Tagore, Surendranath Banerjee, Bepin Chandra Pal… The ideal of Swadeshi, which called for the boycott of British goods, spread widely.

It was at this time that B.C. Pal launched the famous English daily, Bande Mataram; Sri Aurobindo joined it and soon became its editor. Day after day, he jotted down his vision  and tried to instil fire and courage in the nation through the pages of Bande Mataram : “Nationalism is not a mere political programme; nationalism is a religion that has come from God; Nationalism is a creed which you shall have to live.. If you are going to be a nationalist, if you are going to assent to this religion of Nationalism, you must do it in the religious spirit. You must remember that you are the instruments of God… Then there will be a blessing on our work and this great nation will rise again and become once more what it was in the days of spiritual greatness”. But Sri Aurobindo had to fight against the Congress Moderates, who, it must be remembered came out openly for complete independence only in 1929,  of whom he said: “There is a certain section of India which regards Nationalism as madness and they say Nationalism will ruin the country.. They are men who live in the pure intellect and they look at things purely from the intellectual point of view”…. 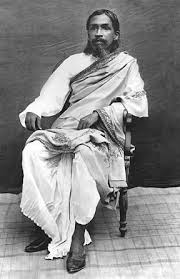 Sri Aurobindo was very clear in what was demanded of a leader of India: “What India needs at the moment is the aggressive virtues, the spirit of soaring idealism, bold creation, fearless resistance, courageous attack”. But if the Moderates dismissed Sri Aurobindo as a “mystic”, Lord Minto, then Viceroy of India, made no such mistake, calling him, “the most dangerous man we have to deal with at present”. Thus Sri Aurobindo was arrested on May 2d 1908, following a failed assassination attempt on a British judge by a nationalist belonging to his brother’s secret society. Sri Aurobindo spent a year in jail, which proved to be the turning point of his life as he went through the whole gamut of spiritual realisations. When he came out, the nationalist movement had nearly collapsed and he set about giving it a fresh impetus, launching a new English weekly, the Karmayogin, as well as a Bengali weekly, Dharma. This following is an extract from his famous Uttarpara speech, where he speaks of his spiritual experiences in jail: “When it is said that India shall rise, it is the Santana Dharma that shall rise. When it is said that India shall be great, it is the Santana Dharma that shall be great… But what is the Hindu religion? It is the Hindu religion only, because the Hindu nation has kept it, because in this peninsula it grew up in the seclusion of the sea and the Himalayas, because in this sacred and ancient land it was given as a charge to the Aryan race to preserve through the ages. That which we call the Hindu religion is really the eternal religion, because it is the universal religion which embraces all others. If a religion  is not universal, it cannot be eternal…. Santana Dharma IS nationalism”…

In mid-February 1910, news reached that the British had again decided to arrest Sri Aurobindo and close down the offices of the Karmayogin. By that time Sri Aurobindo had the vision that India was free, for the external events are always preceded by an occult happening, sometimes long before they become “fait accompli”. Sri Aurobindo then received an “Adesh”, an inspiration that he must go to Pondichery, then under French rule. He settled there, with a few disciples, the number of whom slowly swelled, until it became known as the Sri Aurobindo Ashram. He wrote all his masterpieces and devoted the remaining of his life to bringing down what he called the “supramental manifestation on the earth”. The great Sage passed away on 5 December 1950.

The Lost & Forgotten Wealth of India
Elephanta: The City of Caves
Comment