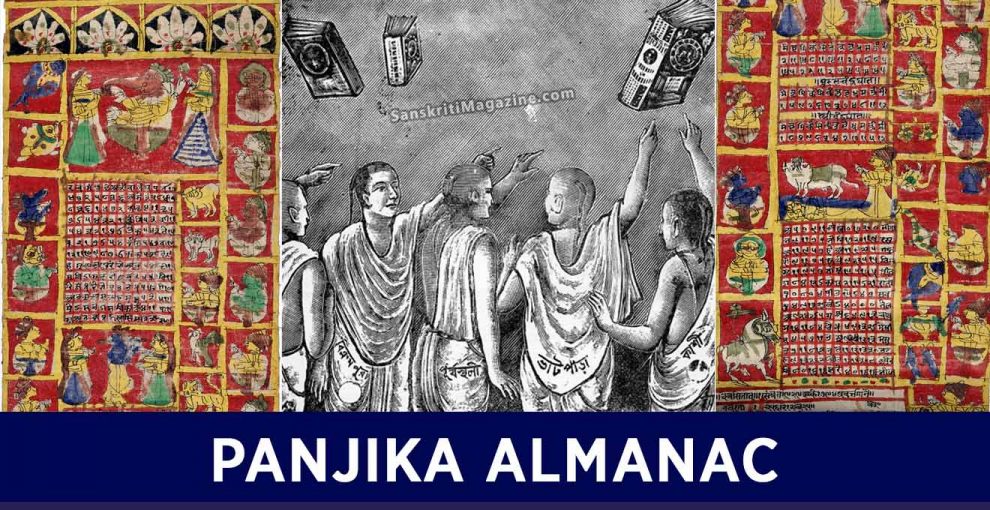 The Panjika (almanac) is a book of dates, lunar days, auspicious and inauspicious times, positions of the sun, moon, planets and stars, horoscope, days of various festivals and religious occasions, etc. In ancient Sanskrit literature and in many regions of India, it is called Panchanga or five sections, because it contains information primarily on five aspects of life: days, lunar days, stars, conjunction of stars and action. In Bengal and Bangladesh it is well known as Panjika.

From the beginning of civilisation, people thought about the passage of time and tried to calculate it; hence, at different places people derived different ways of dividing time into year, month, day and dates. Gradually, the need arose to determine the time of different religious rites and social festivals and functions, and almanacs started serving this purpose also.

In different countries, different methods have been used for calculating time. As the rsis (hermit-scholars) of the Vedic Age used different seasons to celebrate different festivals, calculation of the seasons was very important to them. Accordingly, they divided the year into the summer and winter solstices. When the sun travelled towards the north, it was the summer solstice; when it travelled towards the south, it was the winter solstice. Ancient scholars divided the year into twelve parts: Tapah, Tapasya, Madhu, Madhav, Shukra, Shuchi, Nabhas, Nabhasya, Is, Urja, Sahas and Sahasya. Tapah to Suchi formed the summer solstice and Nabhas to Sahasya the winter solstice. This kind of calculation continued to be used till 1500 BC. The mention of Falguni (spring) full moon in Vedic literature suggests that lunar months were also calculated at that time. However, at that time, only the new moon, the full moon and the eighth lunar day were calculated.

With the passage of time, more scientific Panjika was evolved. Around 1,000 BC, this type of almanac started its year with the summer solstice and contained twelve months. In this, 30 lunar days and 27 stars were counted. A period of five years was counted as an age and the days would be recalculated at that time. Calculations were not always very accurate; on an average, one lunar day for every star was counted and sometimes a lunar day would be dropped from the calculation. For almost 1,500 years, this kind of almanac was used for the calculation of time and for religious and social occasions.

The almanac was greatly improved around the 4th and 5th centuries AD, when finer methods of calculations were adopted. Some of the people who played a leading role in this were Arya Bhatta, Varaha Mihir, and Brahma Gupta. They based the calculation of time on astrology and added the position of stars and planets, their movements, auspicious/inauspicious times, lunar days etc to the almanac. It became very convenient to gather astrological and astronomical information from the almanac.

Surya Siddhanta was regarded as a complete book of astrology. It is regarded as the father of modern almanacs and subsequently time calculations were done on its basis. Scholars used to copy almanacs on palm leaves and carry them to rural areas. Times for worship and other religious and social festivities were fixed on the basis of such information.

In Bangladeshi almanacs, on the left-hand side of every page the position of the moon in the zodiac is written in words; e.g., on the above page, is written chandro kanyayang (the moon is in Virgo). The positions of the different planets in the zodiac are shown through mathematical calculations. It may be noted that before the Surya Siddhanta, the daily positions of stars and planets were not written on the almanac.

The Bangla Panjika has an ancient history, with the earliest perhaps being the Navadvip Panjika, edited by the renowned Smriti scholar Raghunandan. Others who prepared Panjika include Ramrudra Vidyanidhi (18th century) and Biswambhar Jyotisharnabha. For some time the calculations ceased. However, during British rule, due to the efforts of a collector of Krishnanagar, Biswambhar again began the work of publishing the Panjika. At that time it used to be written down in the form of Puthi, but from 1869 it started being printed. From 1890, Bishudha Siddhanta Panjika began to be published. The last official revision of the Panjika was done in 1952 under the aegis of the Indian government. Under the chairmanship of the famous scientist Meghnad Saha, a Calendar Reform Committee was set up which reviewed the existing almanacs and recommended certain reforms. At its recommendation, the publication of the Panjika was brought under the purview of the government and from 1957, almanacs are being published by the Indian government. At present it is published in twelve languages and contains the year, month and day of the Bangla, Hijri, and Gregorian calendars.

One of the most important modifications of the Panjika to the Bangla calendar was that initiated by the Bangla Academy. According to the traditional method of calculation of time, it was not possible to predict the exact number of days in a month. Sometimes a month would have 29 days and sometimes 32 days. This appeared to be the main impediment to the acceptance of the Bangla calendar in all walks of life. To resolve this problem, a reform committee was set up in 1963 by the Bangla Academy with Muhammad Shahidullah at its head. According to its proposal, the first five months of the year were to be of 31 days each and the next seven months of 30 days. Since 1988, the government, in accordance with the Shahidullah Committee’s method of calculation, started using in official papers Bangla dates alongside Gregorian dates. That same year, the Bangla Academy set up a committee of experts to make the Bangla calendar parallel to the Gregorian calendar and remove all errors. In 1995, a ‘task force’ was set up by the Cultural Ministry to develop the calendar and it gave the following recommendations:

In keeping with the Shahidullah Committee’s recommendations, the months from Baishakh to Bhadra would be of 31 days each and those from Asvin to Chaitra of 30 days. During the Gregorian leap year, the Bangla year will also be considered a leap year and Falgun will consist of 31 days.