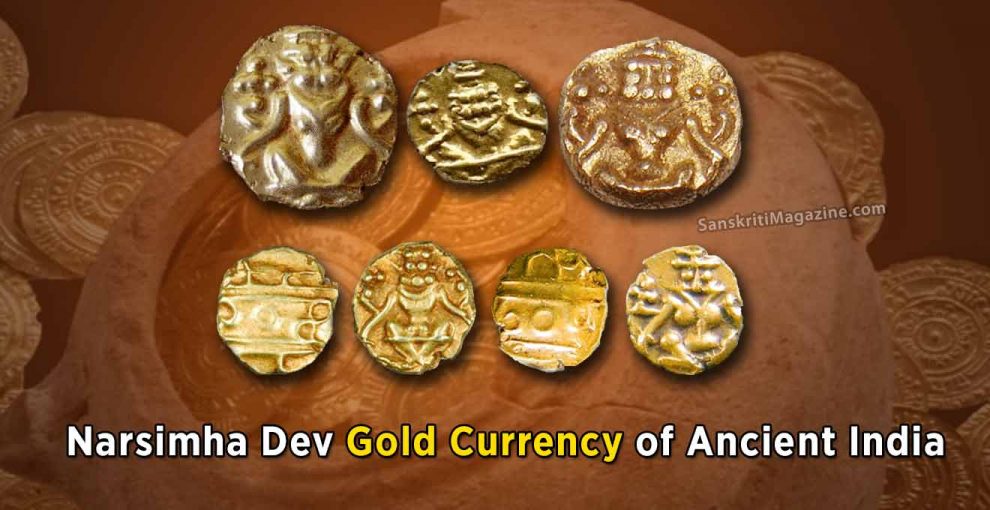 In ancient India, gold fanams were issued by a number of states for use as trade currency. One of these was Mysore, under the reign of King Kantirava Narasa (1638 – 1662 AD). He was the first king of Mysore to issue coins with inscriptions, and these gold coins are still known today as Kantirava fanams. The most beautiful of these bear the image of Lord Narsimha Dev.

Minted in 21 kt. gold, the Narsimha fanams are very small, weighing only about .2 grams and measuring barely 6 mm across. Despite their small size, the artwork is beautiful and there is a wide range of depictions of Lord Narsimha’s beautiful countenance to be found on the coins.

On Kantirava’s Narsimha fanams, the Lord is seen in His yogabhanda mudra, or yoga pose, deep in meditation after Prahlada and the demigods placated His anger. He wears the traditional holy thread janesva around his knees and on some of the Kantirava fanams, a stick is also visible, holding up the Lord’s leg. In His upper hands, the Lord holds chakra and conch, and His lower arms are either resting on His knees, of beside them.

King Kantirava Narasa produced two other fanam series after the Lord Narsimha, depicting Siva-Parvati and Viraraya, the Lord’s lion/boar form. These were engraved in Hoysala style.

The earlier dies, produced during the king’s lifetime, seem to have been made by artists who had superior capability in engraving. Some of the early Kantirava fanams were minted by Sadasiva Nayaka of Ikkeri, an ancient town in Sagara, on the western edge of Karnataka. Coinage minted there is also known as Ikkeri fanams or pagodas. The Ikkeri mint was eventually decomissioned, and later Kantirava fanams were minted by Deevan Purnaiya, during the reign of Krishna Raja Wodeyar-III (1799-1812 A.D.), a later Mysore ruler.

Years later, due to the popularity of the beautiful Narsimha artwork, Kantirava fanams resurfaced yet again, but these were ‘knock-off’ copies. While many authenticated pieces are still in the hands of collectors and available for sale, many of the later coins minted during the British Raj are mixed in. On both types, however, we find the Kantirava legend scripted on the fanam verso.