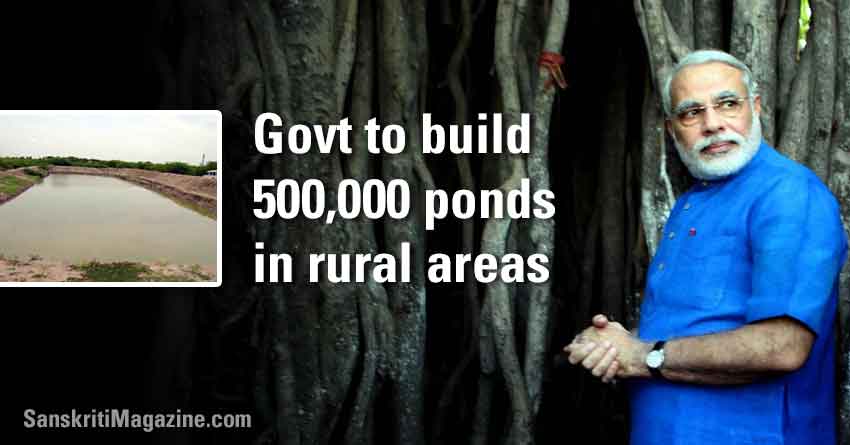 Continuing with the pro-farmer thrust of the National Democratic Alliance (NDA), Modi said the government will build 500,000 ponds in rural areas which can be used for drinking water.

“This is a very important time for farmers. All of us have to think about one thing and that is water conservation. We should use this time to clean our ponds and irrigation facilities which can help farmers during the summer months,” Modi said in his radio programme Mann Ki Baat.

Modi also said that the government had come up with a Kisan Suvidha app which can be used by farmers for information about weather conditions, crops and new farming techniques. Farmers can send in their questions on the interactive app which will be answered, Modi added.

“Some people think digital India is only for youth but that is not correct. This app Kisan Suvidha is for farmers, and I urge farmers to at least try it once. It will help the farmers. Villagers should take the initiative and make plans on what work they want to get done through MGNREGA in their village,” Modi added.

Modi also said that he will attend the 125th birth anniversary celebrations of Dalit icon B.R. Ambedkar on 14 April. “The life of BR Ambedkar gives inspiration to all,” Modi added. The NDA government has been giving thrust to create jobs for scheduled castes, scheduled tribes and women.

Modi used the opportunity to create awareness on tuberculosis and diabetes. The prime minister said that people must get their regular medical check ups done as a matter of precaution. “In 2014, there were 6.5 crore people with diabetes. It is a lifestyle disease and regular check up is necessary,” prime minister said.

In an effort to connect with the youth, Modi said that India will host the under-17 Fifa world cup in 2017 and that young people should get together to create awareness about football in the country. The prime minister said that people should spread the word about football to schools, colleges, villages and every colony. “People can send their suggestions on awareness creation, logos, songs, slogans, souvenirs which can be developed in the coming one year to promote football in the country and also help host the under-17 world cup,” Modi said.

Political analysts feel that Modi is trying to talk directly to the youth, farmers and dalits. “It is like a membership programme of the government. By talking directly to youth and asking for suggestions Modi wants people’s participation so that there is people’s ownership of the event or government programme,” said Mumbai-based political analyst Jai Mrug.