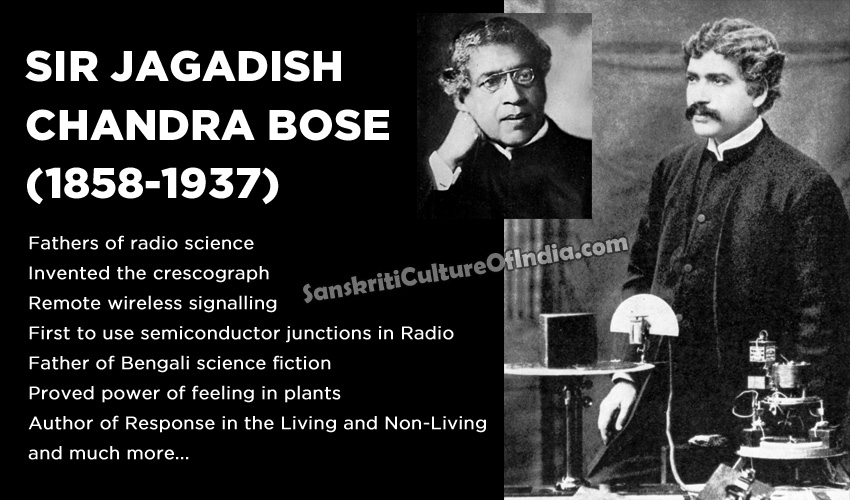 Physicist turned plant biologist Jagadish Chandra Bose was born on 30 November 1858 in Mymensingh, India (now in Bangladesh) to a well-to-do family. A distinguished student, he began attending St. Xavier’s College, Calcutta in 1875 and received the BA degree from Calcutta University in 1877. In 1880 the twenty-two-year old Bose left India for England. For a year he studied medicine at London University, England, but had to give it up because of his own ill health. In 1881 he entered Christ’s College, Cambridge, England, to study physics and graduated from there in 1884 with a Natural Science Tripos (a special course of study at Cambridge). That same year Bose also received the BS degree from London University. Just one year later Bose became a Professor of Physical Science at Presidency College of Calcutta, where for the next 30 years he taught and conducted research. As a teacher Bose was very popular and engaged the interest of his students by making extensive use of scientific demonstrations.

During the years 1894-1900, Bose performed pioneering research on radio waves and created millimeter waves as short as 5 mm. Bose’s work actually predates that of Guglielmo Marconi who is most often associated with the development of radio. Unlike Marconi who sought to commercialize his work with radio waves, Bose was purely interested in radio waves as a scientific endeavor. Bose also developed equipment for generating, transmitting, and receiving radio waves and used it to demonstrate conclusively the waves’ properties such as reflection, total reflection, refraction, double refraction, and polarization. Bose also experimented with galena to form an early type of semiconductor diode, which may be used as a detector of electromagnetic waves.

After about 1900, Bose began pursuing another longtime interest—animal and plant physiology. His contributions to this field were pioneering. He introduced many delicate and sensitive instruments, such as the Chrestograph, which was used for recording plant growth. It could magnify a small movement as much as a million times. Another device he developed demonstrated the effects of electromagnetic waves on living and nonliving matter.

Bose retired in 1915 and was appointed Emeritus Professor, Presidency College, Calcutta, for a period of 5 years. In 1917 he founded the Bose Research Institute in Calcutta which was the first scientific research institute in India. That same year a knighthood was conferred on Bose. In 1920 he became the first Indian scientist to be elected to Great Britain’s prestigious Royal Society.

Bose traveled frequently to Europe and the United States on various scientific missions and gave lectures on electromagnetic waves, the effects of electromagnetic waves on living and nonliving matter, and plant physiology. On a personal level, Bose believed in the free exchange of scientific knowledge and strongly believed that knowledge grows by sharing it with fellow scientists. Bose died on 23 November 1937 at the age of 78.