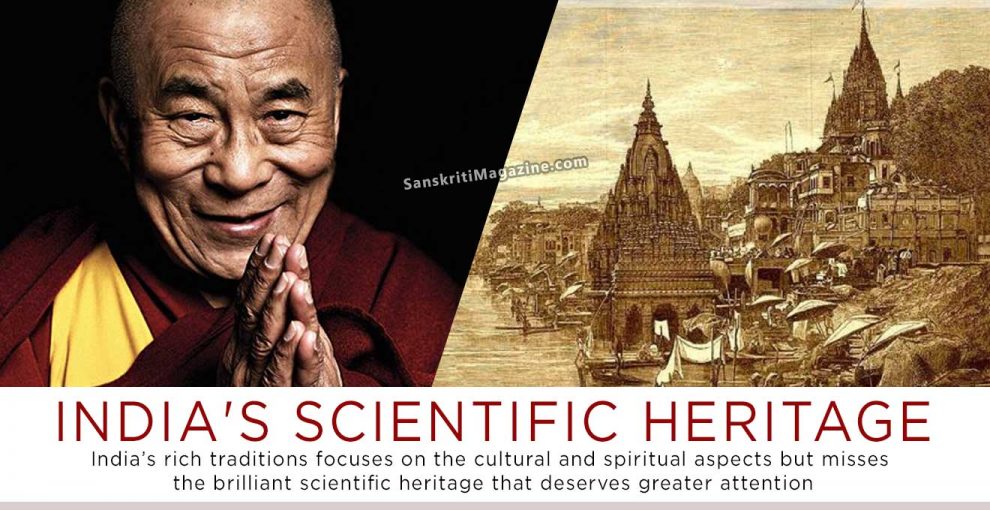 General editor of the first volume on ‘Science And Philosophy In The Indian Buddhist Classics’, scholar-translator THUPTEN JINPA, talks to NARAYANI GANESH on how the general narrative of India’s rich traditions focuses on the cultural and spiritual aspects but misses the brilliant scientific heritage that deserves greater attention

What were the challenges in compiling and editing this hefty first volume?

The idea behind the compilation is very revolutionary and that comes directly from His Holiness the Dalai Lama himself. While there is great respect for Indian civilisation as a source of great spirituality, there doesn’t seem to be much recognition in the general narrative of India’s rich traditional thinking in science as well. There seems to be a naïve perception that India is rich in spirituality but not in rational disciplines like science. The Dalai Lama believes that part of that may be because a large section of these scientific gems are hidden in ethical and religious texts, so people think these are tied to a particular system.

The idea is to extract the scientific ideas and insights about origin of the universe, origin of life on earth, the causal relationship between phenomena, foetal development, relationship between body and mind, theories of rebirth, emptiness, dependent origination — all found in Indian tradition and Buddhist philosophy. Scientific statements pertain to empirical facts of the world, while philosophical insights provide cohesion to the scientific world view, thus offering the larger picture.

The idea is to extract the essence of all these scientific concepts and theories from classical texts and organise them in a simpler manner for the contemporary reader, who then doesn’t have to plough through religious texts and explanations of the paths to moksha to cull out the facts. It is more about history of ideas, how Indian tradition also understood the physical world, set in religious and ethical framework. Now, when it comes to atomic theory, needless to say it is quite crude compared to modern science.

But then we have to remember that with ancient Indian thought, we are talking about a very early time, going back to the beginning of the common era. This suggests the presence of a highly sophisticated thinking on the physical world in ancient India. Indian Buddhist science excels in the domain of mind science; it includes not just workings of the human mind but also techniques that have been developed, based on this understanding, to help us regulate emotion, develop attention, and cultivate metta-awareness.

So this mind science is not just historically important, but very relevant to today’s world as well. This is one area where modern science is weak; only now they are talking about how conscious mental training, such as meditation, can affect the human brain. So the second volume in the series is about mind science. Buddhist science is not only about working of the mind but also techniques to deal with emotions. It studies the effect of meditation.

How do the Indian Buddhist texts define reality — as a mental or physical construct?

So you have both camps, but none would deny the empirical world of our experience. Even if one takes the external world to be ultimately a projection of the mind, one has to acknowledge some level of intersubjectivity and the fact that we all share the same world. For example, when you walk, you could knock over the table there; that there are objects in the world and they are composed of something, these are facts of shared experience.

Even from contemporary scientific point of view too, what we perceive as a solid object, such as a table, is a construct of our mind. In reality, what we have is a collection of atoms configured in a particular manner. So there is the common sense description of reality and the more ultimate scientific description of what that reality is.

At the basic level, the particles are empty. Is that related to the concept of shunyata?

■ The empty particle concept is not shunyata; that concept comes from the Kalachakra Tantra — to go beyond and understand a sort of common idea that the universe comes into being, remains for a while and collapses and reappears. Where do all the material phenomena go when they disappear? Kalachakra Tantra says in the world of matter there are empty particles. That is material in a potential state. A sort of antimatter concept, no physical attributes to empty particles, but they carry the potential.

Not completely nonexistent. All matter of the universe collapses and remains in a potential state. Next cycle, it reappears from here, then the microscopic world starts to appear. This idea is most pronounced in the Kalachakra Tantra, which modern scholars date to around ninth or the tenth century. Shunyata, on the other hand, is a philosophical concept famously systematised by Nagarjuna in the second century, which is a radically relativistic view that rejects any notion of objective, intrinsic existence of things. It really raises the question of the possibility of ever having a complete picture of reality.

Shunyata is a very radical philosophy. Basically, it will accept the concept of atom at conventional aggregate level, but it will reject underlying assumptions that there will be irreducible matter at the end. They say a discrete, selfenclosed entity does not exist, thus rejecting any notion of absolute. Shunyata philosophy says that the only way we can talk about reality is in terms of relationships. Even the subtle-most particle will always have a dimension that can be related to some other particle — very similar to modern physics.

Shunyata is perhaps the basis of non-belief in a Creator?

■Non-belief in a Creator is a pan-Buddhist idea. The basis of non-belief in a Creator is law of causality; causes and conditions. The Buddha says if this exists that exists — that arises this arises, cause and effect. Prati samupadya — dependent arising. For the theists, the reason for belief in a transcendent Creator is because of the need to have an underlying Creator standing outside a world of causes, setting the whole thing in motion — an underlying reason for the world of cause and effect.

But Buddhism rejects this idea, and says that we must understand evolution of cosmos purely as a result of causes and conditions, so there is a phrase — idam pratyaya —‘this-conditionedness’, to describe this basic standpoint. ‘Non-associated conditioning factors’is a philosophical concept that tries to deal with abstract ideas like time.

When you reduce taxonomy of reality in Buddhist thinking, it boils down to matter, consciousness and conditioning factors, all the abstract ideas you could think of. There are three levels of facts — those that are evident and can be perceived by direct experiences, those that are hidden but can be inferred based on observed facts, and those that are extremely hidden for which we have no evidence, other than the testimony of a reliable authority.

On a smaller scale, this may be okay but at the cosmic scale?

■We may never get the complete picture, but at the same time, we cannot help but build our knowledge based on particulars, whether inference or perception. And in the process of seeking, we will continue to get a better and better description. Modern science may say the same thing, but classical scientists believe in the possibility of finding a grand theory that will ultimately explain everything. ■

The Forgotten 54: India’s lost soldiers from the Indo-Pak war of 1971
BHANG & GANJA: Cannabis Was Neither A Sin Or Crime In The Land Of Lord Shiva
Comment