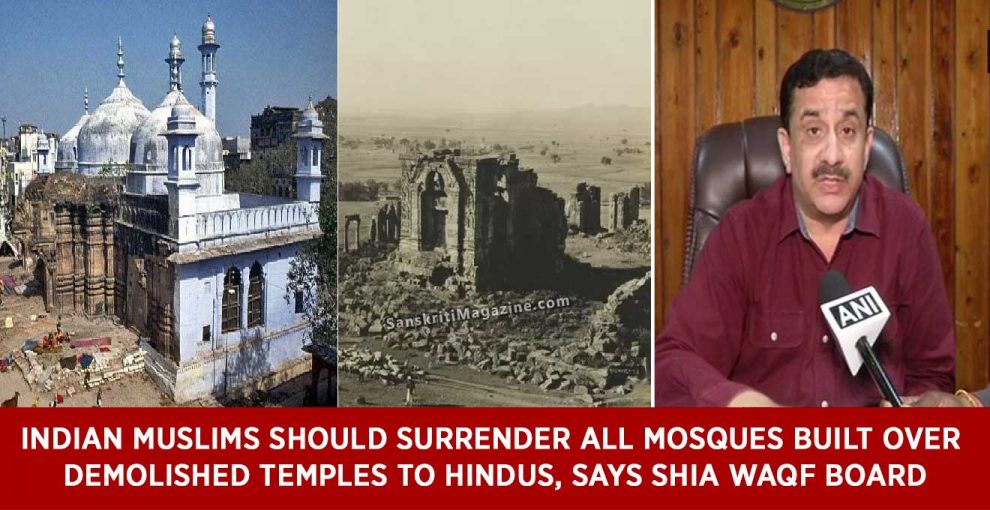 In a very surprising move, the Shia Central Waqf Board chairman Waseem Rizvi has given a call to All India Muslim Personal Law Board (AIMPLB) asking them to surrender all 9 Mosques which were built destroying temples in India. In a letter written by Waseem Rizvi, he has requested the AIMPLB to give back the land and surrender the mosques which earlier belonged to Hindu temples.

He has listed the prominent 9 Hindu temples which were destroyed by the Mughal Kings centuries back to construct mosques in the place. Among them Babri mosque in Ayodhya; Keshav Dev Temple in Mathura; Kashi Vishwanath Temple in Varanasi; Atal Dev temple in Jaunpur (all in Uttar Pradesh); Rudra Mahalaya temple in Batna, Gujarat; Bhadrakali temple in Ahmedabad, Gujarat; Adina Mosque in Pandua, West Bengal; Vijaya temple in Vidhisha, Madhya Pradesh; and Mosque Kuvutul Islam Qutub Minar in Delhi have been listed.

He said that his move came following the historical evidence put forth by various historians which suggest that the most of the prominent mosques in India were built by destroying Temples.

Speaking to ANI, Rizvi said “I sent have a proposal to All India Muslim Personal Law Board stating nine mosques, as historians claim, were built by Mughal rulers after demolishing Hindu temples. I raised a question that if mosque is built at such a spot and elsewhere too, will it be a legal structure?”

It is a well known fact that in India during the Mughal rule for over 500 years, thousands of Hindu temples were destroyed by various Mughal Kings in a bid to convert Hindus to Islam. According to available data, over 40,000 temples have been destroyed by the Mughals in the past 500 years. But after independence, the so called secular governments completely ignored this issue and spread fake history and glorified those killers and murderers of Mughal kingdom to appease a section of people in the country. The facts were hidden, the truth was twisted and a false narrative was built around the glorious past of the Hindu Kings.

This was the reason why the Ayodhya issue exploded out of control 20 years back, but still has not been solved. The only reason is that the lack of judicial and political will to solve this issue and politicians only want to use them for election gimmicks. However, it is only after Modi government came to power, few people like Dr Swamy, Sri Sri RaviShankar are putting effort to bring an end to the controversy. The day to day court proceedings will soon start from this month and the verdict is said to be out anytime during July-August.

Although most of the stakeholders have come to consensus, politicians from Congress and AIMIM do not want the issue to be solved and are asking adjourn the hearing up to 2019. But it is most likely that court will take up the hearing on day to day basis and put a closure to the 20 year old dispute.

Now Rizvi’s remarks supporting Ram Temple and 9 other temples has irked the Muslim board and cleric Mufti Mukarram said the proposal is against the Indian Constitution. “A temple should remain a temple and a mosque should remain a mosque,” he stated.