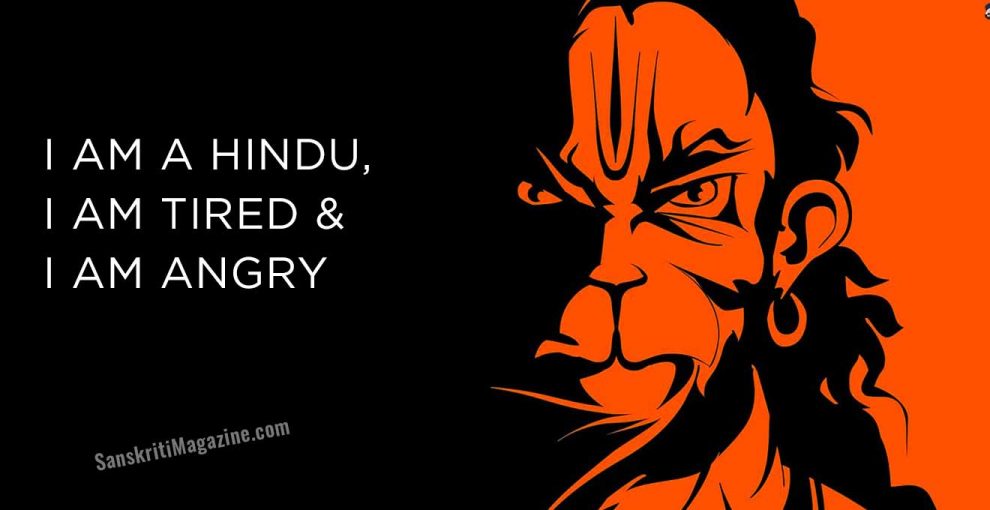 I am an Indian Hindu and I am tired. And I am angry.

I am tired of the constant outrage, of the incessant, unceasing assaults on my faith, on my festivals, on my traditions and beliefs, on my way of life.

I am tired of the constant attempt to heap guilt on me as a Hindu. I am tired of my Gods, my sacred symbols, my way of worship being ridiculed and vilified every time. I am tired of cheap hashtag activism so gleefully disseminated by the Hinduphobic elite.

I am tired of the systematic legal and constitutional oppression of my fundamental rights in my own country. I am tired of my educational institutes being forced to shut down by callous governments and I am tired of my temples being used as milking cows by regimes of every hue, red, green or Saffron!

I am tired of the assaults, relentless, and unceasing on my very existence.

I am tired of being at the receiving end of attacks from Chrislamists, from communists, from the media-academia-entertainment industry cabal.

I am tired of the constant, well-funded, well-planned, systematically run campaigns that try to divide the Hindus, and I am tired of how easily we let ourselves get divided at every juncture. Caste, language, food, gender, any excuse will do for us to divide ourselves into tiny splinter groups!

I am tired of the abject surrender by the namesake Hindu elite, their open co-opting with the enemy, their enthusiastic lapping up of anti-Hindu propaganda for selfish gains, their craven sucking up to the very people who grind their faces in the dirt every time. I am tired of how every time the so-called Hindu leadership ends up selling out Hindu interests to seek approval of the same Chrislamocommies who openly despise them.

I am tired of meaningless platitudes that some of our people give about how retaliation is not the ‘Hindu way’ and how we should accept all the insults thrown at us meekly because we are a ‘civilisation that survived’!

Really? Cockroaches survive too as a race, despite millions of their brethren getting exterminated every year, does that mean a cockroach has an honourable existence?

We are in the middle of a civilisational war, and if you are a Hindu and cannot see it, or you choose not to see it, then perhaps you deserve to be on the losing side.

There are so many moments when I ask myself if the fight is worth it. There are days when I want to leave the outrage far behind and focus on things that make me happy – the Tri-Sutri of Temples, Textiles and Travel!

And then, I travel to an Indian village and see people wearing their Hindu-ness with pride. I visit an ancient temple carved out top-down from a solid mountain, I see weavers doing Namaskar to their loom first thing in the morning before starting work, finding a deep spiritual connect with the work they are doing. I see Hindu-ness acting as a firm anchor, connecting people to their roots, and I find myself getting rejuvenated.

For centuries, they destroyed our temples, they vandalised our Murtis, they raped our women and they sold our children into slavery. And yet, people held on to their Dharma against all odds. These were ordinary people, people with no great means, people of little learning maybe, but with great faith. Yes, I see the same Dharma being practised even today with the same steadfastness.

Yes, what we have together is worth fighting for! As Hindus who are aware of the sinisterness of the attacks on the Dharma, it is our duty to fight.

As Sitaram Goyal once put it, every conscious Hindu mind is a soldier for the Dharma.

Dharma protects those who protect it!