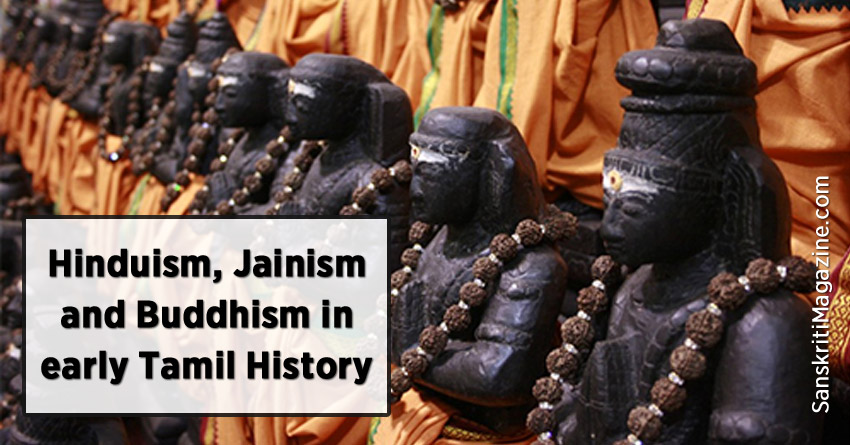 If one were to appraise the religious character of early Tamil society, one will need to refer to the earliest specimens of Tamil literature that exist today i.e. the Sangam-era work. The Sangam works consist of two literary compendia namely the Ettutogai or Eight Anthologies and the Pattu Paatu or 10 songs. Both are dated to between the 1st and 3rd centuries of the Common Era (CE). It is also important to cite the earliest Tamil grammar in existence today i.e the Tol-kaapiyam. The latter text is usually dated to the early centuries CE. There is an academic debate on the internal consistency and date of the Tol-kaapiyam.

The Sangam compendia I refer to excludes the 18 later works or the Pathinen-keezh-kannaku nool which subsumes the Silapadikaram, the Manimekalai, the Tirukural and other later texts. Those are post-Sangam works.

If one were to explore the Sangam-era, one finds a bardic tradition interspersed with references to the veneration of the Hindu gods Seyon or Murukan, Maayon or Vishnu, Venthan or Indra, Korravai or Durga and Varuna. These were the patron deities of the Tamil land. Seyon or Murukan was the benefactor of the hill tribes while Venthan or Indra was the God of Rain and the protector of the fertile agricultural tracts. Varuna, the God of the Sea, was the guardian of the maritime tracts and all those whose livelihood depended on the sea. Korravai or Durga was the patron of the fierce tribes of the arid tracts. Maayon or Vishnu, also known as the lotus-eyed or Taamarai Kannanaar, protected the herdsmen. The Sangam literature refers to the mighty womb of Korravai that gave birth to Seyyon. There are allusions to the three-eyed God, Siva.

There are references to the Brahmins who tended the sacred fire and studied the four Vedas or Naan Marai. Several Brahmins contributed to the corpus of early Sangam literature. This included Kapilar, Uruttira-kannanaar, Nakeerar, Paalai Kauthamanaar and Perum Kausikanaar to mention just a few. There were several others. Several of the Chera, Chola and Pandya monarchs performed the Vedic sacrifice as documented in the Sangam corpus. The practice of suttee existed. This inheritance is what we today call Tamil Hinduism. The literary allusions to the Jains and Buddhists were far fewer in the Sangam-era.

The pottery and stone inscriptions in Tamil Brahmi dated to the decades before the dawn of the common era offer insights as well. The potsherd inscriptions linked to a megalithic culture contain references to Murukan while the few early rock inscriptions document individual donations to itinerant Jain monks.

The more copious literary record that has survived to date reflects a Hindu folk idiom linked to the rural populace, chieftains and the priesthood while the rock inscriptions suggest individual traders sponsoring Jainism. Buddhism in that early era was numerically less significant. Hoole’s point that Hinduism influenced the Tamil land only in the 7th century is therefore false.

Buddhism emerged in a significant manner in the Tamil land with the later Kalabhras. The Kalabhra dynasty had invaded and ruled Tamil Nadu between the 4th and the 6th centuries CE. Inscriptional and literary evidence indicates that the Chola, Chera and Pandya kings were ruthlessly suppressed. The Kalabhras patronized Buddhism and used Prakrit. Buddhism remained an urban phenomenon. Most Tamil Buddhist monks of this period chose to write in Pali, not Tamil. This included Buddhadatta Thera from Uragapura (Uraiyur) and Dhammapala Thera from Tambarattha (Tirunelveli) who traveled to Sri Lanka to translate the proto-Sinhalese language commentaries into Pali. The celebrated Buddhist commentator Buddhaghosha lived for a while in Madhura-sutta-pattana (Madurai) en route to Sri Lanka to study the proto-Sinhalese texts. Hoole’s contention that Sinhalese literature is a 9th century phenomenon linked to the suppression of Buddhism in the Tamil land is therefore flawed!

The Buddhist zeal of the Kalabhras triggered a home-grown Saivite and Vaishnava revival in the 6th century. This in turn saw the eclipse of Pali scholarship in the Tamil land and a renewed pride in the Tamil language.

Buddhism however continued in urban Tamil Nadu until the 14th century. The Culavamsa describes Sinhalese kings inviting Tamil monks from South India to visit Sri Lanka between the 12th and 14th centuries CE. The Tamil grammar, the Vira-choliyam, was authored by a Buddhist in the heyday of Chola rule in the 10th century CE. The Saivite Hindu Cholas sponsored this Buddhist author. Meanwhile, the Jain center of Sittanavaasal continued to flourish between the 7th and 9th centuries. Saivite Hinduism did not annihilate Buddhism or of Jainism in 7th century Tamil Nadu as Hoole writes. The Buddhist presence in Tamil Nadu ended with the establishment of the Madurai Sultanate in the early 14th century. Tamil Jainism continues to exist to this day.

Hoole highlights the alleged impalement of 8,000 Jains in 7th century Tamil Nadu and cites Nambi Aandaar Nambi, an early medieval Saivite scholar, in support of his claim. This was a literary allusion with no independent evidence. The Chalukyas and Rashtrakutas ruled in neighboring Karnataka. Several of the near contemporary Chalukya and Rashtrakuta monarchs, not to mention the Pallava kings in Tamil Nadu were Jain. There is no corroborating Jain literary or inscriptional evidence of any such impalement. The inquisition was a Christian instrument of persecution, not Hindu.

Hoole is likewise dishonest in selectively quoting Nilakanta Sasti’s History of South India to extrapolate that Buddhist and Jain temples were converted into Hindu places of worship ignoring the extensive evidence provided by Professor Sastri on the Brahmanic and Vaishnava presence in the earliest period of Tamil history.

In conclusion, what we now designate as Hinduism was pre-eminent in the earliest years of recorded Tamil history. The Jains did extensively contribute to Tamil literature at a subsequent date. To argue that we were Jains and Buddhists before we became Hindu is simply incorrect.