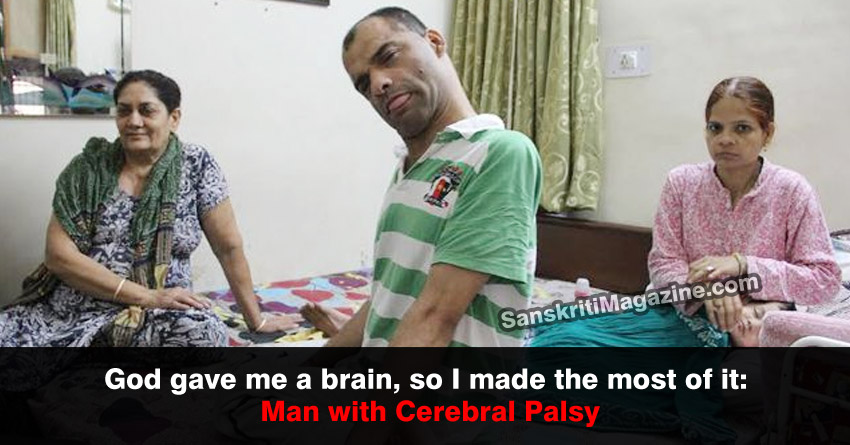 Nothing stops the people who have an unrelenting desire to pursue their dreams, and Kuldeep Singh Dhaka, a 36-year-old quadriplegic (cerebral palsy) from Hisar, is one of those people.

He is a writer, a scholar, an astrologer and a father of a one-year-old girl.

Born with locomotor disability, Dhaka never allowed his condition to be an excuse for not working towards his goals in life.

“Kuldeep had jaundice at the time of his birth. Doctors warned me that he wouldn’t survive, and if he does, then he wouldn’t lead a normal life,” said Umawati, Dhaka’s mother.

Among the three children, Dhaka was the only son. Seeing his sisters going to school, he also developed curiosity to learn what they were learning.

“Seeing his condition we didn’t enroll him in any school. However, we soon noticed that he used to immerse himself into his sisters books. Gradually, he learnt all the stuff just by watching them and learning from them after which we got him admitted to a school,” says, Umawati.

During his school days, Dhaka used to teach his younger sister mathematics and Hindi. He never went to school, except for taking his exams and even that used was a herculean task.

“I was required to arrange for a student two classes below me to sit with me and write what I would say. Besides, I also had to pay for the special invigilator fee for monitoring my exams,” says, Dhaka, who despite passing class 10 in first grade, feels that if could have written himself his grades would have been better.

Dhaka went on to study at Kurukshetra University, from where he did his masters in political science through distance education mode.

Dhaka who sees himself as a normal human being, idealises Stephen Hawking, “I have read him a lot. No one can match his caliber.”

However, being a poet and a writer, he sees a guru in absentia in former prime minister Atal Bihari Vajpayee.

“How beautiful his poems are! Despite all the political animosity, no one ever questioned Vajpayeeji on his literary skills,” exalts the young writer, who with his two fingers has written three books of poetry: Shabd, Mai aur Deewaray; Shayad Nahi; and Abilasha. He is presently writing a novel on disability wherein he would be sharing his own experiences.

When asked for his motivation, the witty author replies, “I always used to think, what would I do by sitting idle at home? God has given me a brain which is working fine. So I have to make most of it.”

The story of Dhaka’s marriage is also equally interesting. He met his wife Rukamini on a matrimonial website and Dhaka popped the question after exchanging a few mails. Though Rukamini’s mother was against the knot – owing to Dhaka’s condition – Rukamini went ahead and the bet has paid off.

The two lead a normal couple’s life which Dhaka owes to Rukamini treating him as an equal.

Meanwhile, Dhaka has filed a petition in the Punjab and Haryana high court in a recruitment case, wherein a  person with 40% disability was selected over him.