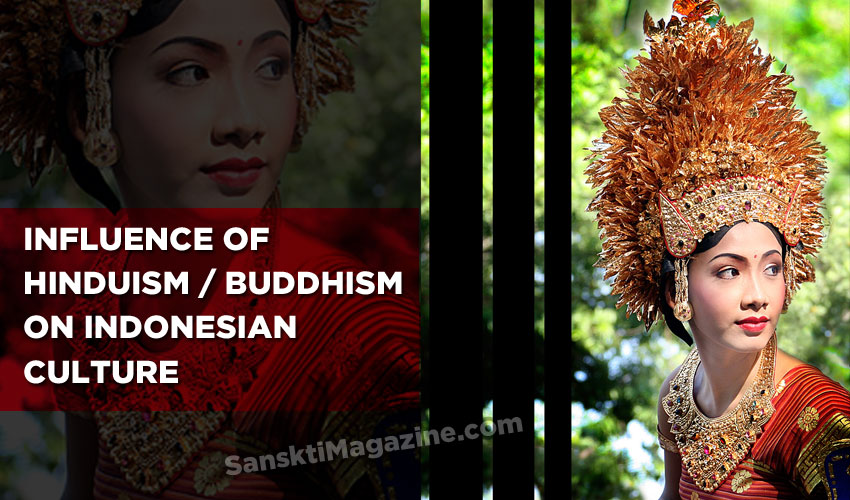 Acculturation processes had happened in the past, when local cultures in Indonesia met and adopted elements of Indian culture, especially those supported by a great, literate tradition. In the many historical and cultural surveys, it has been made clear enough that two great religions, originating in India, namely Hinduism and Buddhism, had cast a penetrating influence on Indonesia’s cultural life. It was through the attraction of these two great religions that the cultural relation between India and Indonesia was geared in the past.

Along with the religious beliefs, there entered into Indonesia’s cultural life new ideas in the art and science of literature, architecture, and sculpture and supposedly also in arithmetic, astronomy, linguistic, politics and philosophy. A momentum of growth of literateness and of the use of stone for religions buildings, had given an impression of seemingly sudden development. This is actually a subtle point worth to be investigated more deeply, using our present updated sources of information.

The specific question arising today is what was, or has been, the move or the ground of changes that have undergone through the ages, which made the Indian cultural contents be turned into strongly local varieties, and followed further with the emergence of totally different styles of art? Was it creativity? Or was it the existence of underlying indigenous values and taste for forms? It might be both; and possibly, combined with a degree of satiation whenever a style was felt as stagnant. 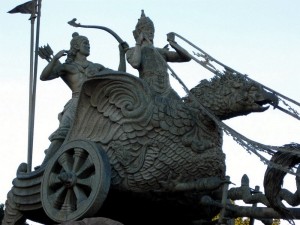 The visual art comprises sculpture, painting, carving, communication, calligraphy and eventually architecture . Architecture will be the subject of another paper in this seminar. I will not, though, deal with the rest of visual art forms, since the data I know of are not sufficient. It is only sculpture which will be discussed.

Sculpture can be divided into two forms. The first is the art of statuary, and the second is the art of reliefs. The materials used can be either stone, metal (especially bronze and gold), or ceramic (mostly baked clay). The first occurrences of Hindu or Buddhist sculpture, conspicuously made locally, where those made in Central Java in the 8th or possibly 7th century. These include the stone statues of Hindu deities found on the Dieng Plateau, where many temple remains still exist, and the golden plaques depicting Hindu deities found in villages called Gemuruh. Both Dieng and Gemuruh are situated in the Wonosobo district, Central Java. There is a possibility too that one of the two stone Visnu statues found at Cibuaya, West Java, and the Visnu statue of Wanayu Bali, were also made locally.

Those early Hindu statues of Java, the majority of which depicting the deities Siva, Visnu, Harihara, and Brahma, conform to the basic iconographic traits observed in statues of the same deities found in India. Siva holds his attributes consisting of the fly whisk, the rosary, the earthen drinking vessel, and the trident. He is also often accompanied by the bull as his vehicle. Likewise, Visnu and Brahma hold their usual attributes and accompanied by their respective vehicles. The early statues of Central Java still show an awkwardness of technical executing, but presumably less than a century afterwards the Indonesian sculptural capacity came to a full bloom beginning in Central Java. Temples which evidenced this peak performance are among others Barabudur, Mendut, Ngawen, Plaosan (all of them Buddhist), and the Hindu temples of Banon and Prambanan. The style of sculpting is still close to the Indian models. Nevertheless, a conspicuously Indonesian nuance can be observed. The modeling of the surface of the body is less rounded compared to most Indian statues. As a consequence, bodies of female figures are never delineated in as voluptuous a way in Indonesian as in Indian sculpture. Moreover, parts of the body are no more clearly separated, but are more shaped into a unity.

In its further development, as it is attested by the East Javanese, Balinese and Sumatran sculpture of the Hindu Buddhist period, a clearly different standard of beauty was there, as the basis of the art of sculpting. No more voluptuousness, no more sheer naturalism is observed as a prominent trait.

There are evidences from the pre-historical era. The sculpture of that age is characterized by simplicity of design, angularity of lines, and stiffness of poses. These characteristics came back in East Javanese sculpture, but in a more refined artistic expression, thanks to the exercises in aesthetics and technology adopted from Indian culture. In pre-historic statues the face is the main focus. This, again, became the modifying factor for a later development in statuary as well as in dramatic arts. Characters are marked by their distinctive headdresses. Thus we can, for East Javanese reliefs, distinguish the figure of Arjuna from that of Bhima or Yudhisthira by recognizing their respective headdresses.

The art of reliefs has, likewise, took a localized turn of development. The depiction of stories in a row of consecutive panel of reliefs is one among the dominant features of ancient Indonesian art, especially that of Java. The stories are locally made, although some of the roles in it could be adopted from Indian epics. Ancient Indonesian narrative reliefs, beginning from its inceptive phase, seem to have always been somehow related to contemporaneous theatrical art. 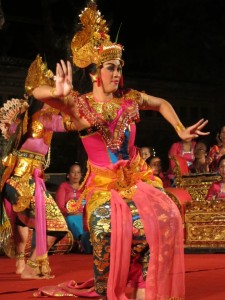 Rules of dance and drama, thus taken from classical Indian sources, were developed creatively, even transported to storytelling using the visual art medium. In the art of dance, the introduction of Indian style and technique, within a society that evidently already had its own indigenous dance style seemed to be accompanied by a process of social stratification. The difference in social strata was intensified by distinctions of lifestyle arbitrarily created. The “high style” referring to the Natyasastra, was assigned to the high-ranking members of the society, which was either the aristocrat or the wealthy, whereas the local dance style was assigned for the commoners. This strategy in using dance style as a discriminating factor between different social strata is observable through the Barabudur architecture representing the 8th-9th century Central Java.

The device of social stratification had been used in subsequent ages, in Java up to the latest kingdoms, Nevertheless, substantially there had been a great change. The style of court dances became more and more indifenous in its basic movement quality, although in terms of forms and the range of segmental movements there are elements that betray their Natyasastra origin clearly. Dance poses are not symbols or meanings anymore; they have become symbols or character and mood.

Characterization has become a predominant issue which permeates any rendering of dance elements. The gait, the leg gesture, the art and hand movements, the facial make-up, the headdress, and also the voice and the details of costume, all are adjusted to specific characters, classificatory tendency seems to be the ground for such a development in the Javanese, Balinese and Sundanese dramatic art in Indonesia.

Visually, the fance and the headdress become the focus of characterization. This fact can be regarded as the recurrence of a prehistoric trait of statuary, or image making in general. Meanwhile, parallel to it the headdress in most ethnic groups is made as an important status discriminating trait.

The classical Indian Kavya poetry was the mother of Kakawin poetry of Javanese-Balinese literature. This kind of principle of poetry is in forming a pattern of composition of long and short syllables for each recurrent poetic line. Quite different from it is the local Indonesian (especially Java-Bali-Sunda) poetry, categorically called the Kidung stanza doesn’t consist of recurrent lines of the same melodic pattern. Every Kidung metre has its own pattern concerning the number of lines in each stanza, the number of syllables for each line, and the ending vocal sound of each line. For every Kidung metre a variety of melodic rendering can be made. Thus it is very different from the Kakawin, and hence there is no way of seeking its origin in the Kakawin. The Kudung or macapat must be indigenous. However, the question still arises, of whether it had been there since before the introduction of the Kavya style of poetry, or was it pushed into existence because of the presence of the Kakawin? The art of making Kakawin could have been developed so far that a satiation level of creativity had been reached, and this in its turn had brought the poets to look for new lines. These speculations should still be put into hypotheses for being investigated through further research.

~ Dr. Edi Sedyawati, Director General of Culture, Indonesia.  Excerpted from a lecture on Indian influence in Indonesian culture, illustrating the context and focus at the cultural amalgamation.

Preservation of Ramayana in Malaysia