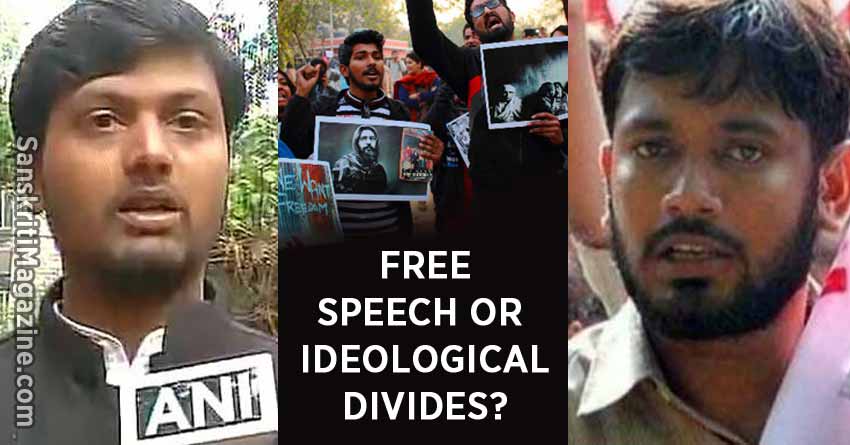 The nation is being torn apart on the issue of JNU and JU and the difference in view is sought to be given the colour of ideological divide on the question of free speech.

But there is more to it and the notion of Sovereign State and Sedition in a Democracy seem to have been challenged in these two hallowed institutions.  Afzal Guru celebration   can’t be so simply delinked from the JNU incident leading to the arrest of Shri Kanhaiya. Freedom of speech is not an abstract thing suspended in vacuum. Speech can’t exist without content/ meaning. Vak and artha (vagartha) are inextricably inter-meshed. Freedom of speech, like every variety of freedom, has to have defined boundaries to be meaningful and functional in the temporal world. Boundless absolute doesn’t exist in this worldly realm. Greatest of the modern protagonists of Liberty, Mill, recognizes the boundaries of Liberty. Thus the questions of treason, sedition, etc., can’t be wished away from the issue of freedom of speech on the basis of our individual likes, dislikes, prejudices, ideological affiliations, etc.or merely because the perpetrators are students and it was done within the university campus.

Dissent raised by Naxalites in West Bengal between 1967 and 1972 originating in Naxalbari and spreading to college and universities in Kolkata was not condoned by the then leftist government. The West Bengal Government enacted the West Bengal (Prevention of Violent Activities) Act 1970 to arm itself to repress the uprising.  The movement was crushed finally in 1972 when the State was under Governor’s rule and Siddartha Roy was the advisor.  Naxalites were annihilated by Police with the help of Congress goondas.

Similarly, university autonomy is not sovereignty; it is not above the national laws and constitution.

The definition and applicability of sedition in the Indian Penal Code can be understood from the following:

Explanation 1.—The  expression “disaffection” includes disloyalty and all feelings of enmity.

Explanation 2.—Comments expressing disapprobation of the measures of the Government with a view to obtain their alteration by lawful means, without exciting or attempting to excite hatred, contempt or disaffection, do not constitute an offence under this section.

Explanation 3.—Comments expressing disapprobation of the administrative or other action of the Government without exciting or attempting to excite hatred, contempt or disaffection, do not constitute an offence under this section.]

Here is a famous judgment of the Supreme Court in the case of Kedar  Nath Singh vs State of Bihar (1962, AIR, 955) where the Court has said the following,

” Section 124A of the Indian Penal Code which makes sedition an offence is constitutionally valid. Though the section imposes restrictions on the fundamental freedom of speech and expression, the restrictions are in the interest of public order and are within the ambit of permissible legislative interference with the fundamental right………… Keeping in mind the reasons for the introduction of s. 124A and the history of sedition the section must be so construed  as to limit its application to acts involving intention or tendency to create disorder, or disturbance of law and order; or incitement to violence. “

The matter therefore needs to be examined factually and legally in the appropriate court of law having no regard for ideological views of the accused.

Similarly, the incident of assault on Kanhaiya and others by some lawyers must also be thoroughly investigated on facts and the culprits booked and tried in a court of law.

On ideological divide, the reader may find the following poem, posted by Partha Sarathi Chowdhury on Facebook on 20th February, beautifully capturing how the same action is given a twist/spin  across the ideological divides.

If you criticize me,
it’s your freedom of speech
If I criticize you,
it’s my Intolerance
.
If you judge me,
you are Enlightened
If I judge you,
I am Prejudiced
.
If you question my faith,
then you are Secular
If I question your faith,
then I am Communal
.
If you defend yourself,
it’s because you are a Victim
If I defend myself,
it’s because I am Ignorant
.
If you pen your thoughts,
it’s Revolutionary
If I pen my thoughts,
it’s Provocation
.
If you march,
it’s a Protest
If I march,
it’s a Mob
.
If you lodge a complaint,
you r following the Course of Law
If I lodge a complaint,
I am Misusing the Law
.
Try twisting all the words,
the only one you fool is The Man in the Mirror!
Now one has to identify who is I and who is you…

~ Sudip Bhattacharyya, The author is a commentator on contemporary issues in Society, Politics and Economy