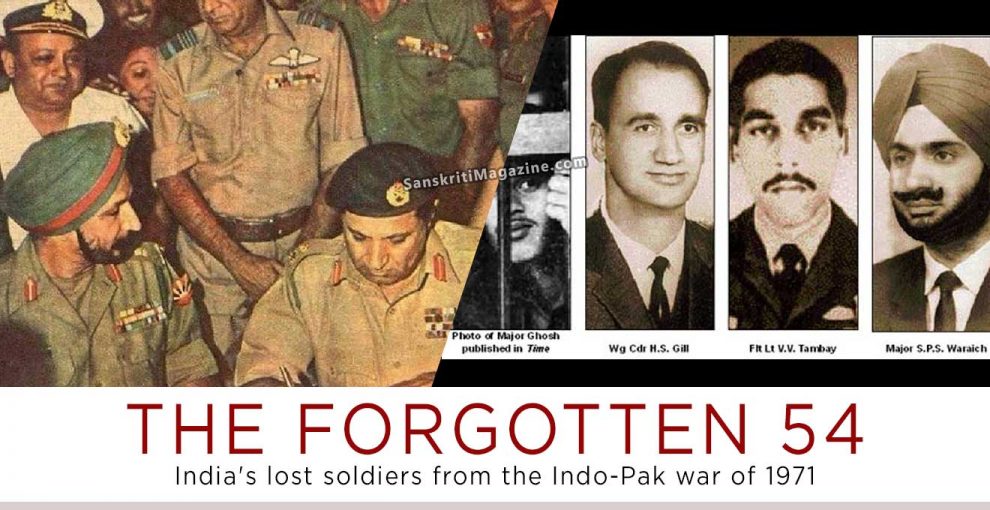 Well, it ended for most of the nation. But there are 54 families for whom the war and the waiting never ended. The agonizing wait goes on to this day. These are the families of the 54 Indian prisoners of war PoW who were never released by Pakistan after the war. Their names are as follows:

Imagine a loved one from your family in that position. What do you feel? Multiply that feeling a thousand times over. That is what these 54 families have felt every day for the last 45 years.

There is ample evidence for the existence of these 54 prisoners in the Pakistani jails. Consider some of the evidence:-

·        on December 26, 1974, R.S. Suri received a hand-written note dated December 7, 1974 from his son. The letter contained a slip in which his son had written, “I am okay here.” The covering note read, “Sahib, valaikumsalam, I cannot meet you in person. Your son is alive and he is in Pakistan. I could only bring his slip, which I am sending you. Now going back to Pak.” Signed M. Abdul Hamid. In August, 1975, he received another missive postmark dated ‘June 14/15/16, 1975, Karachi.’ The letter said, “Dear Daddy, Ashok touches thy feet to get your benediction. I am quite ok here. Please try to contact the Indian Army or Government of India about us. We are 20 officers here. Don’t worry about me. Pay my regards to everybody at home, specially to mummy, grandfather – Indian government can contact Pakistan government for our freedom.” The then Defence Secretary had the handwriting confirmed as Ashok’s and changed the official statement from “killed in action” to “missing in action”!

·        Maj AK Ghosh’s photograph was published in Time Magazine dated 27-12-1971 The photograph is proof that Maj AK Ghosh was in Pakistani custody when the war ended on 17 December 1971. He did not return with the POWs in 1972 at the time of the Simla agreement. He may have died in the interim period in a Pakistani jail. Surely there must be some record of that. The Indian and Pakistan governments can work together to find out what happened to such men. Why were some names not included in the POW list is again a moot point.

·        Mohanlal Bhaskar repatriated on 09.12.1974 writes “Main Bharat ka jasoos tha” or “ I spied for India” Mohanlal Bhaskar, who was in a jail between 1968 and 1974 and repatriated on 09.12.1974 wrote a book in Hindi ( I was a spy for India) and gave a signed affidavit stating that he met a Col Asif Shafi of Second Punjab regt of Pakistan and a Maj Ayaaz Ahmed Sipra in Fort of Attock imprisoned for conspiring against Bhutto in the infamous “Attock conspiracy” . The Pakistani Major Ayaaz Ahmed Sipra spoke of his befriending a Gill of the Indian Air Force and a Captain Singh of the Indian Army as well as mentioning that there were around 40 Pows of the 1965 and 1971 wars in that jail who had no chances of release

·        In the Attock Conspiracy, several officers of Pakistan’s army and air force were arrested on March 30, 1973, on charges of conspiring to overthrow the government of Zulfiqar Ali Bhutto. The detainees included Major Farooq Adam, Major Nadir Pervez (who later became a federal minister in the Nawaz Sharif government), Brigadier Wajid Ali Shah, Colonel Hamdani, and Major Ayaz Sipra, and a total of 59 officers were declared conspirators. The case is well known as the Attock conspiracy. Fifteen army and four air-force officers were found guilty of conspiracy and were handed jail terms ranging from three months to life. In this conspiracy, 15 officers were sentenced to terms in prison – among them Maj Ayaaz Ahmed Sipra and Col Asif Shafi. Others such as Farooq Adam (a Gallian, i.e. from Lawrence school, Ghoraghali) were also sentenced in the Attock conspiracy. Ayaaz Ahmed and Shafi later apparently moved to the US where Shafi was again traced by Manish Jain (son in law of Sqn Ldr Jain, another Indian officer missing and believed to be in Pakistani jails since the 1971 war) and Shafi confirmed to Jain unofficially that he had met Wg Cdr Gill in Attock in 2000 in a telephonic conversation.

·        A Pakistani General, General Riaz, Governor NWFP who subsequently died in an accident informed Mr Ashwini Kumar, then IG of the Border Security Force as a personal favour to him at the Munich Olympics in 1972 that Major Waraich was being held in Dargai jail, NWFP.

·        In her biography of Benazir Bhutto, British historian Victoria Schoffield reported that a Pakistani lawyer had been told that Kot Lakhpat prison in Lahore was housing Indian prisoners of war from the 1971 war. They could be heard screaming from behind a wall, according to an eyewitness within the prison.

·        Pakistani media outlets have also alluded to the men’s existence. The shooting down of Wing Commander Heresen Gill’s Mig 21 on 3 December 1971 was followed that day by a radio broadcast in which military spokesperson claimed that an ‘ace Indian pilot’ had been captured.

·        An American general Chuck Yeager also claimed in his autobiography that during the 1971 war, he personally interviewed Indian pilots captured by Pakistan. The airmen were of particular inertest to Americans because at the height of the cold war the men had attended training in Russia and were flying Russian designed and manufactured aircraft.

·        The families also claimed that on the two occasions when they were allowed to visit the Pakistani jails, the jail guards privately attested to the men being alive – before being ushered away by the prison authorities.

Maybe it is all of the above reasons. But the biggest reason is that India forgot them. These men are the forgotten 54 of India. The ruling elite and the bureaucracy of the nation did not find it fit or suitable to keep these men and their release on their agenda. It was because this was not an issue strong enough to dictate the political, professional or financial fate of any politician or bureaucrat. Nobody in the decision making echelons had time for them.

What sort a nation are we that forgets it’s soldiers after the war is over? Was it not the collective responsibility of the nation to pressurize the governments to take this issue more seriously? After all, these PoW are somebody’s sons, brothers, husbands and fathers. Every nation and society is morally obliged to ensure that those fighting for it’s independence are looked after well in their hour of need. There can be no need more urgent than being released from the inhuman captivity of an enemy like Pakistan.

After the war the ruling class and he elite got busy trying to ‘improve relations’, they very conveniently swept this issue under the carpet. Over the years the self appointed elite that has dictated the agenda of the nation has all but deleted this issue from the collective consciousness of the nation. We are too busy trying to prove that ‘art has no borders’ ‘sports has no borders’ and such nonsense that will never find any reciprocity from across the border. To uphold such thrash, issues like the prisoners of war had to be forgotten and they were forgotten.

The military top brass too should have followed up more aggressively on this issue with the government. They were and are in a position to exert pressure on the government for this. Agreed, there were other pressing issues but this issue too is equally pressing and urgent.

All in all, the entire nation is responsible for this and this is an unforgivable fault. Nothing can be done for these 54 now except making Pakistan acknowledge that such a thing has happened. But we can and must ensure that such a thing never happens again.

Share this as much as you can till the entire nation knows about it. Share it till the 54 are no longer forgotten.