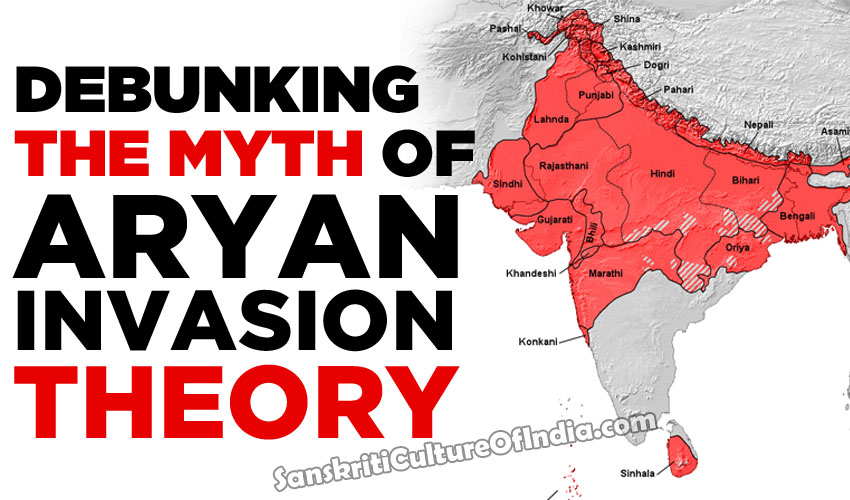 The Aryan Invasion Theory is not a subject of academic interest only, rather it conditions our perception of India’s historical evolution, the sources of her ancient glorious heritage and indigenous socio-economic-political institutions which have been developed over the millennium. Consequently, the validity or invalidity of this theory has an obvious and strong bearing on the contemporary Indian political and social landscape and the future of Indian nationalism.

The Aryan Invasion Theory (AIT) denies the indigenous origin and evolution of the sources of India’s glorious Vedic culture and heritage. Such a proposition defies common sense and available scriptural, archaeological and historical evidence. For thousands of years Hindu society has looked upon theVedas as the fountainhead of all knowledge–spiritual and secular–and the mainstay of Hindu culture, its heritage and existence. Never have our historical or religious records questioned this fact. And now, suddenly, in the last century or so, it has been propagated that the Vedas do not belong to Hindus, they were the creation of a barbaric horde of nomadic tribes who descended upon North India and destroyed an advanced indigenous civilization. A nomadic, barbaric horde of invaders cannot by any stretch of imagination produce the kind of sublime wisdom or pure and pristine spiritual experiences of the highest order as one finds in the Vedic literature.

AIT is merely a proposed “theory,” and not a factual event. Theories are modified, discredited, nay even rejected with the emergence of new knowledge and data pertaining to the subject matter of the theories. The most weird aspect of the AIT is that it has its origin not in any Indian record but in European politics and 19th century German nationalism. AIT has no support either in North Indian literature, tradition, science or in any of the South Indian, Dravidian (inhabitants of South India, who were supposed to be the victims of the so-called Aryan invasion) literature and tradition. There was absolutely no reference in Indian traditions and literature of an Aryan Invasion of Northern India until the British imperialists imposed this theory on an unsuspecting and gullible Indian society and introduced it to the Indian school curriculum.

A major flaw of the invasion theory was that it had no explanation for why Vedic literature that was assumed to go back into the second millennium BCE had no reference to any region outside of India. Also, the astronomical references in the Rig Veda allude to events in the third millennium bce and even earlier, indicating the origin of Vedic hymns earlier than 3000 BCE. The contributions of the Vedic world to philosophy, mathematics, logic, astronomy, medicine and other sciences provide one of the foundations upon which rests the common heritage of mankind. These are well recognized but cannot be reconciled if theVedaswere composed after 1500 bce.

Further, if it is assumed that the so-called Aryans invaded the townships in the Harappan valley and destroyed its habitants and their civilization, how come after doing that they did not occupy these towns? The excavations of these sites indicate that the townships were abandoned. And if the Harappan civilization was originated by the Dravidian, who were then allegedly pushed down to the south by Aryans, how come there is no Aryan-Dravidian divide in the respective literatures and historical tradition? The North and South of India have never been known to be culturally hostile to each other. Also, was South India uninhabited prior to the pushing of the original population of Indus Valley? If not, who were the original inhabitants of South India who accepted the newcomers without any hostility or fight?

If the Aryan Hindus were outsiders, why don’t they name places outside India as their most holy places or motherland? Why should they sing paeans in the praise of India’s numerous rivers crisscrossing the entire peninsula, and mountains–repositories of life giving water and natural resources, nay even bestow them a status of goddesses and gods. These are some of the obvious serious objections, inconsistencies and glaring anomalies for which the advocates of the invasion theory have no convincing or plausible explanations.

What, really, is the Aryan Invasion Theory?

According to this theory, northern India was invaded and conquered by nomadic, light-skinned RACE of a people called ‘ARYANS‘ who descended from Central Asia (or some unknown land ?) around 1500 BC, and destroyed an earlier and more advanced civilization of the people habited in the Indus Valley and imposed upon them their culture and language. These Indus Valley people were supposed to be either Dravidian, or AUSTRICS or nowadays Shudra class etc.

The main elements on which the entire structure of AIT has been built are: Arya is a racial group, their invasion, they were nomadic, light-skinned, their original home was outside India, their invasion occurred around 1500 BC, they destroyed an advanced civilization of Indus valley, etc. And what are the evidences AIT advocates present in support of all these wild conjectures:

Consequences of the Aryan Invasion Theory in Context of India

In short such a view and this concocted Aryan Invasion theory by a few European historians in order to prove the supremacy of Christianity and Western civilization, served (and still serving) the purpose: ‘divide and conquer the Hindus‘.

“Our archaeologists’ dreams of India being full of dark-eyed aborigines, and the bright Aryans came from – the Lord knows where. According to some, they came from Central Tibet; others will have it that they came from Central Asia. There are patriotic Englishmen who think that the Aryans were all red haired. Others, according to their idea, think that they were all black-haired. If the writer happens to be a black-haired man, the Aryans were all black-haired. Of late, there was an attempt made to prove that the Aryans lived on Swiss lake. I should not be sorry if they had been all drowned there, theory and all. Some say now that they lived at the North Pole. Lord bless the Aryans and their habitations! As for as the truth of these theories, there is not one word in our scriptures, not one, to prove that the Aryans came from anywhere outside of India, and in ancient India was included Afghanistan. There it ends…”

“And the theory that the Shudra caste were all non-Aryans and they were a multitude, is equally illogical and irrational. It could not have been possible in those days that a few Aryans settled and lived there with a hundred thousand slaves at their command. The slaves would have eaten them up, made chutney of them in five minutes. The only explanation is to be found in the Mahabharat, which says that in the beginning of the Satya Yoga there was only one caste, the Brahmins, and then by differences of occupations they went on dividing themselves into different castes, and that is the only true and rational explanation that has been given. And in the coming Satya Yuga all other castes will have to go back to the same condition.” (The Complete Work of Swami Vivekananda, Vol.III Page 293.)

So, What are the facts?

Now, based on what has been presented above, following facts about an ancient and glorious period of India clearly emerge: