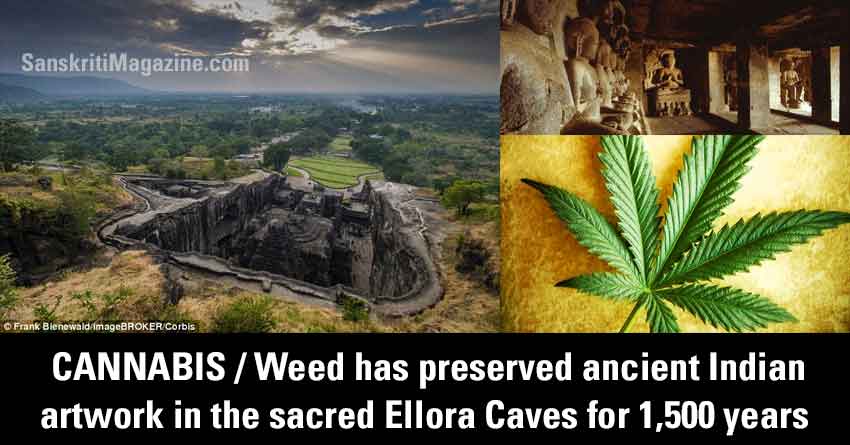 Artists may have often turned to drugs at times to help them find inspiration, but it seems cannabis has also played a role in preserving precious artworks within ancient caves in India.

A mixture of hemp, clay and lime plaster is responsible for preserving paintings and intricately carved scenes in the sacred Ellora Caves, which were hewn from rock 1,500 years ago.

This is because it regulates humidity and deters pesky insects, which have attacked older nearby artworks at the Ajanta Caves, which were built in the second century BC and lack cannabis fibres.

The oldest part of the Ellora Caves, lying northwest of the city of Aurangabad date to the 6th century and the newest parts, to the 11th century.

The group of 34 rock cut caves are dedicated to the three main religions of India: Buddhism, Hinduism and Jainism.

‘The use of hemp helped the caves and most of the paintings remain intact at the 6th century Unesco World Heritage site,’ according to the study by Rajdeo Singh of the Archaeological Survey of India’s science branch and M Sardesai of Dr Babasaheb Ambedkar Marathwada University.

The duo collected a sample of plaster from Cave 12 of the complex and isolated cannabis sativa, or ganja, before examining it under a scanning electron microscope, according to the study, published in the journal Current Science.

Other techniques, such as Fouriter transform infrared spectroscopy, confirmed the presence of c. sativa in the building material.

Dr Singh told the Times of India: ‘In the sample collected from the Ellora cave, we found 10 per cent share of cannabis sativa in the mix of mud or clay plaster. This is the reason why no insect activity is found at Ellora.’

Specimens included ‘pounded pieces of shoots, fragmented leaves and a single flower,’ according to the study.

When compared to samples of fresh hemp grown near Aurangabad and the outskirts of Delhi, the archaeological specimens were deemed to be similar.

The study suggests that the properties of hemp, including its ability to repel insects and regulate humidity, must have been known to the builders of the remarkable site in the 6th century.

‘The remains of Cannabis from the sample of clay plaster of Ellora suggest that it was used with clay/lime binder as insulating agent as well as to provide a degree of strength to the plaster,’ the researchers wrote.

‘Studies in Europe have estimated 600 to 800 years of life span to the hempcrete wall system, but hemp in the clay plaster of Ellora has survived more than 1,500 years.

‘The long life of clay plaster at Ellora, despite damaging environmental parameters, may be attributed to the material properties of hemp, which is fibrous and durable.’

The study says hemp plaster has the ability to store heat, resist fire and absorb up to 90 per cent of sound, meaning it created a ‘peaceful living environment for the monks’ at Ellora Caves.

The discovery could inform construction techniques of the future, where more sustainable materials are increasingly being used, however, this could be illegal in places where cannabis is banned.

THE INCREDIBLE ELLORA CAVES OF INDIA

The Ellora Caves were dug out between the 6th and 11th centuries.

The caves are a group of 34 structures excavated out of the vertical face of the Charanandri hills with temples or buildings inside them dedicated to the three main religions of India – Buddhism, Hinduism and Jainism.

The complex runs in a north to south direction for 1.2 miles (2km). At the southern end are 12 Buddhist caves and at the north, six Jain caves, with 17 Brahmanical caves inbetween.

The Buddhist caves are the earliest and number 12 – where the sample was taken from – is a three-storey building with indistinguishable traces of paintings on the ceilings and walls of the inner shrine.

The designs painted on the wall and ceilings represent floral and creeper patterns and other geometric shapes.

‘It is obvious that the colour of these paintings is dull and insipid owing to deposition of soot and weather conditions as the caves are exposed to sunshine and rainfall,’ the study says.

Cave 16, known as the Kailasa temple, is considered one of the most remarkable cave temples in India because of its size, architecture and sculptural treatment.

It is dedicated to Shiva, and also contains smaller shrines to other Hindu gods.\

The structure looks like a freestanding, multi-storeyed temple complex, but it was carved out of one single rock, and covers an area double the size of Parthenon in Athens.

The construction of the temple is popularly attributed to the Rashtrakuta king Krishna I who ruled between 756 and 773.

In 1983, the collection of caves were declared a Unesco World Heritage Site.