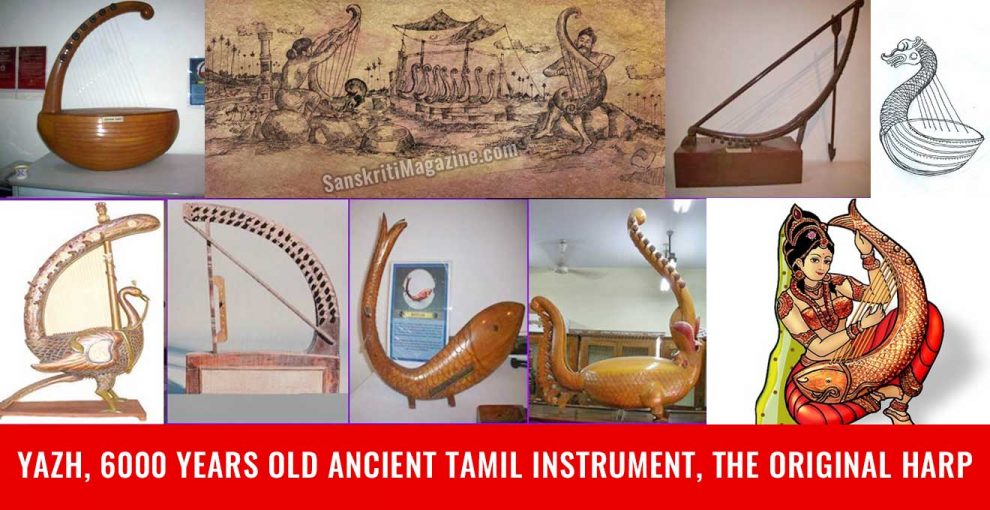 The Yazh (Tamil: யாழ், also transliterated yaaḻ) is an Indian harp used in ancient Tamil music which was the ancestor of modern day veena. It was named so, because the tip of stem of this instrument was carved into the head of the mythological animal Yali. The yazh was an open-stringed polyphonous instrument, with gut strings (narambu) with a wooden boat-shaped skin-covered resonator and an ebony stem.

The yazh was an open-stringed polyphonous instrument (Polyphonic meaning: Music with two or more independent melodic parts sounded together), with a wooden boat-shaped skin-covered resonator and an ebony stem. It was tuned by either pegs or rings of gut moved up and down the string. The yazh highly resembles the Veena, among the Indian Instruments, in structure. It is designed in such a way that the stem of the main body of the instrument tapers to the resemble the head of the weird animal ‘Yali’ (vyala in Sanskrit). Hence the name ‘yazhi’ or ‘yahzh’. Depending on variations in designs, the instrument took different names such as ‘mayuri yazh’ (mayuri meaning peacock), ‘vil yazh’ (Vil Yazh – it means bow string. It was essentially a bow with strings of different lengths: vil meaning bow), etc.

An associate of Kovalan (the hero) in ‘Silappadhigaaram’ was not only a musician and a talented singer, but could also play a difficult type of Yazh called Sakota Yazh. Senkotti Yazh is again mentioned in ‘Silappadhigaaram’. Seeri Yazh, Maruththuva Yazh and Adi Yazh, Matchya Yazh, Maruthuva yazh are other varieties which are mentioned in ancient Tamil Literature. Sculptural depictions of the yazh can be seen in the temple in Tirumayam (near Pudukkottai), Amaravathi and Khajuraho, to mention a few.

Thiruvalluvar, the 200 BC Tamil poet, mentions yazh in his work Thirukkural. Many major Tamil classical literary masterpieces written during Sangam period dating back 200 BC have mentioned the yazh.

Other types of yazh are

The Tamil literature Perumpāṇāṟṟuppaṭai says the strings of a yazh should not have any twists in them. Silappatikaram mentions four types of defects in yazh. Other Tamil literature which have mentions on yazh are Seevaga Sindhamani and Periya Puranam. Yazh are seen in sculptures in the Darasuram and Thirumayam temples in Tamil Nadu and also in Amaravati, Andhra Pradesh. Swami Vipulananda has written a book of scientific research in Tamil called the Yal Nool.

The first one is Sakota Yazh, second is Villu Yazh with a pedestal, third is Makara (Crocodile) Yazh, and the last is Matsya (Fish) Yazh

Talang Tuwo inscription of Indonesia
Who was Sandrocottus: Samudragupta or Chandragupta Maurya?
Comment