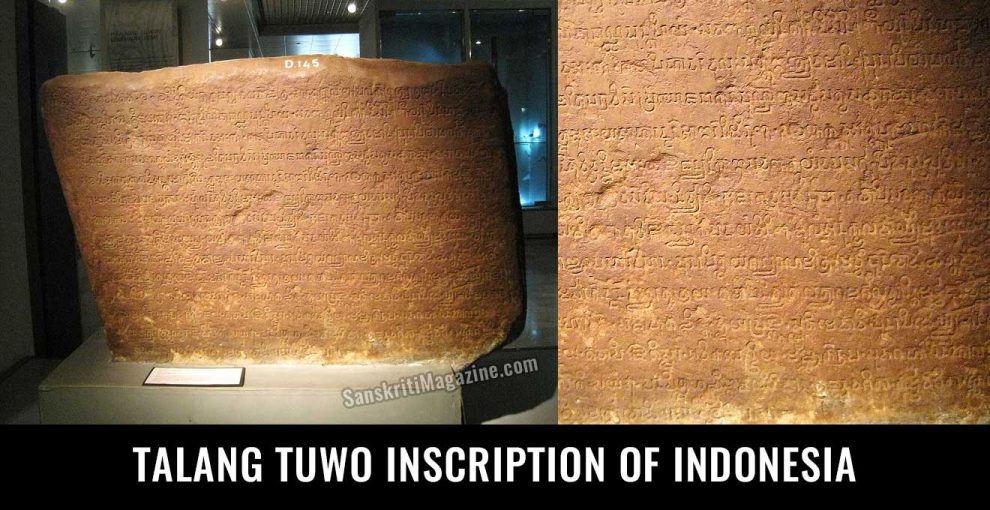 Talang Tuwo inscription is a 7th-century Srivijaya inscription discovered by Louis Constant Westenenk on 17 November 1920, on the foot of Bukit Seguntang near Palembang, Indonesia.

If we see the inscription closely the script which was used is Tamil.

Tamil is a very ancient language, we have learned that Tamil kings build Angkor Watt in Cambodia, Tamil kings had a country called Kadaram and Ganganagara in Malaysia, Tamil Kings also built temples in Laos, Vietnam and Thailand. It is undeniable truth that many Asian countries used Tamil letters as their official script. After the arrival of Islam in Asia, specifically in Indonesia and Malaysia, they have lost their Tamil script. Due to Islam civilization Kings in those countries started to use Arabic scripts. Today both countries lost their Tamil identity and scripts. They are just using Modern Latin alphabet.

At least Indonesia still preserving their Hindu temples and inscriptions but Malaysia is totally in the state of denial. The denial state Malaysia is trying to demolish all the Hindu evidence which they have. The Country which called Ganganagara was fully destroyed by the current government. Historically Indonesia and Malaysia had a big connection with Tamil culture and scripts.

The world should monitor Muslims countries so that they do not destroy Sanatana Dharma identity in their countries. We should preserve our history for the future generation to learn about the truth.

Translation of the inscription Talang Tuwo according to George Cœdès:

On 23 March 684, on that day the park named Śrīksetra was created under the order of Sri Baginda Śrī Jayanāśa. his majesty intention is: May all (plants) planted here, coconut tree, Areca catechu, Arenga pinnata, sagoo, and all kinds of trees, the fruits are edible, as well as haur bamboo, waluh, and pattum, et cetera; and may all other plants with the dams and ponds, and all of good deed that I’ve gave (contributed) can be enjoyed for the benefit of all creatures; the one that can moved around and ones that can not, and may this would be the best path to achieve happiness. If they were hungry, or need a rest during their journey, may they find foods and drinks.

May all the orchard that they have opened be abundance (the harvest). May all kinds of animals that they have kept were fertile, and also their slaves. May the misfortunes would not befell upon them, not being tortured because can not sleep. Whatever they done, may all the planets and stars favour their fortunes, and may they be spared from sickness and old age during their efforts. And may all their subjects are loyal and devoted, also may all their friend would not betrayed them, and may their wife are faithful.

Moreover, may wherever they were, there will be no thieves, or people that using violence, killers and adulterers. Next to all those (good wishes), may they have a (faithful) friends; may from themselves born the thought of Boddhi and friendship (…) from three Ratnas. And may they always (acted) generous, following the rules, and be patience; may from themselves grew strength, diligence, knowledge of all kinds of arts; may their attention be focused, have knowledge, good memory and intelligence.

May they have tenacious thought, with diamond body just like the Mahāsattvas with incomparable power, glorious, and remembering their previous lives, with complete senses, fully (beautiful) formed, happy, smiling, calm, have pleasant voice, the voice of Brahmā. May they be (born as) man, with very existence were (a blessing) because of themselves; may they become the vessel of cintamani sacred stone, have power of (cycle of) births, power upon karma, power upon stains, and may they finally achieved the perfect and grand (spiritual) enlightenment.