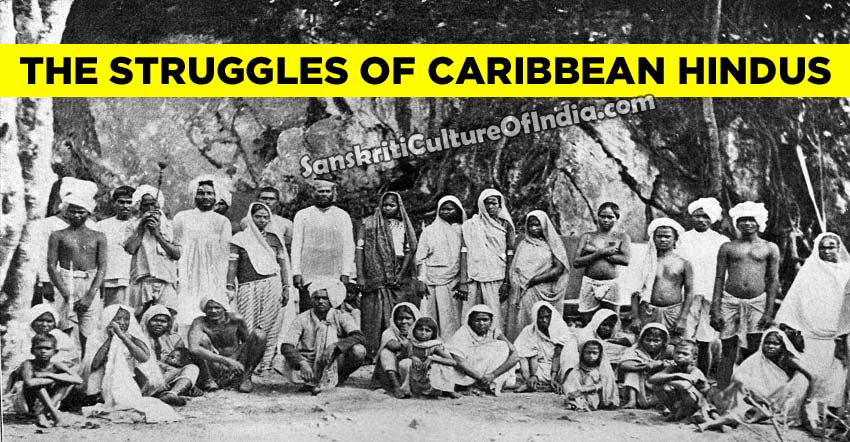 The winds of time have scattered Hindus to the most far-flung and unlikely places across the globe. One such place is the Caribbean. Unknown to most, the Caribbean region is home to a large Hindu community.

Guyana, Trinidad and Surinam are the main centres of Hindu population in the Caribbean. Hindus make up 28%, 23% and 33% of these countries’ populations respectively. Many other Caribbean countries also have significant Hindu populations. They have produced many distinguished individuals over the years, the most famous being Noble Prize-winning writer V. S. Naipaul.

Hindus have been in the Caribbean for a very long time. They began to arrive in the 1830s, and continued to do so for the next few decades. The tale of their arrival is a sad one.

British traders transported Indians to the Caribbean as ‘indentured labourers’, to work in sugar cane plantations. The owners of the plantations were upset by the abolition of slavery by the British Empire in 1833, because they required a regular, docile and low-waged labour force. The abolition appeared to spell economic disaster for them. The solution came in the form of a new system of forced labour, which in many ways resembled enslavement. Indians, under a ‘indentured’ or contract labour scheme, began to replace enslaved Africans on plantations across the British Empire.

It is acknowledged that the condition of indentured labourers was every bit as harsh as the erstwhile African slaves. They were confined to their estates and paid just 1 shilling per day. Any breach of contract brought automatic criminal penalties of two months’ imprisonment or a fine of £5 (a considerable sum of money in those days, especially for an indentured labourer.

As part of this huge labour migration, nearly half a million labourers came to various Caribbean islands and South American colonies. The Indian labourers came from areas stretching from the Punjab to Dacca (now Dhaka) in North India, and from areas of the former Madras presidency in South India.

Destined to live in barracks/logies left by former African slaves, these indentured labourers struggled through many hardships. Several thousand perished during their journey through Kala Pani, the dark waters of the Atlantic and Indian Ocean, and later on through the inhumane working conditions of plantations.

There were also cultural and religious challenges. During the colonial period, it was a matter of policy that Indians had to become Christian before being eligible for government jobs. Christian missionaries were very active amongst these leaderless Hindus, and indeed many were converted. There were great challenges in the field of education too. Despite such adverse circumstances, the Hindus make up the majority of the Indian-origin population in the region, and have managed to preserve a unique culture and sense of identity that endures till today.