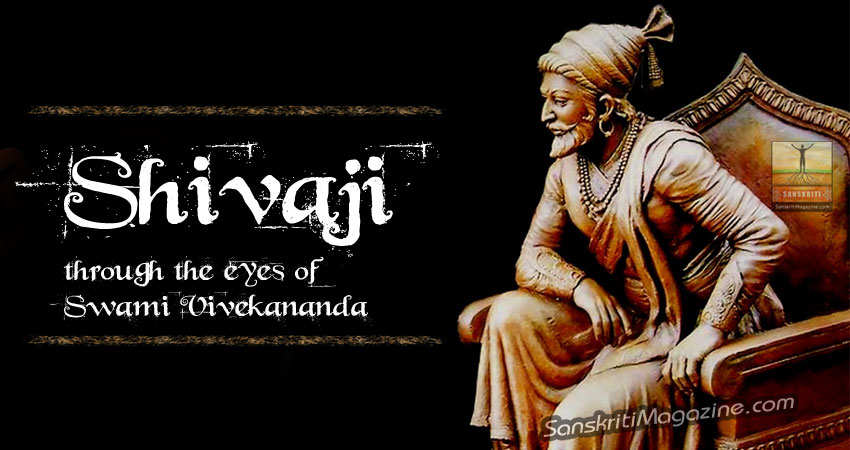 It was a beautiful moonlit night and Swamiji was sitting in the verandah of the bungalow of the late Mr. Bhattacharjee on the South Beach of Madras, conversing in Hindi with Mr. Munshi Jagamohanlal, the private secretary of the Maharajah of Khetri. This gentleman had been sent by the Maharajah to trace out the whereabouts of the Swamiji and to fetch him back to Khetri to bless the newly born son and heir to the State.

When Swamiji was at Khetri about a year previously, the Maharajah of Khetri had begged of him to confer the boon of a son and Swamiji while he was in one of his higher moods had actually blessed him saying that God had granted his prayer. So the Maharajah wanted Swamiji back in his palace at any cost and could not remain contented until he saw him. When I went over there after my office work I prostrated before Swamiji and took my seat; and suddenly Swamiji began to sing a Hindi song in praise of Shivaji in his own masterly way, the last two lines of which were:—

(As forest-fire is to the forest trees, a leopard to the deer-herds and a lion to the stately elephants; as the sun is to the darkness of the night, as Krishna was to Kansa, so was king Shivaji, a lion, towards the hordes of Mlechchas.)

It was a long song as I learnt it afterwards; but I who had learnt in my school days that Shivaji was a cunning unprincipled freebooter, ‘an upstart robber,’ a marauder and a treacherous murderer, suddenly interrupted Swamiji and asked him how that praise and those lines were justified in the case of Shivaji. Was he not a mere child of fortune, a marauder who collected similar men like himself and succeeded in establishing a kingdom by sheer cunning and treachery? Swamiji immediately gave up his singing and saw me full in the face, his face being lit up with the fire of indignation and said,

“Shame on you, Doctor.

“You are a Mahratta and still that is all you know of the greatest king that India had produced within the last three hundred years; one who was the very incarnation of Siva, about whom prophecies were given out long before he was born; and his advent was eagerly expected by all the great souls and saints of Maharashtra as the deliverer of the Hindus from the hands of the Mlechchas and one who succeeded in the establishment of the Dharma which had been trampled under foot by the depredations of the devastating hordes of the Moghals.”

“This is what comes of your reading Indian History written by foreigners who could have no sympathy with you, nor could they have any respect for your culture, traditions, manners and customs which they could not understand. Is there a greater hero, a greater saint, a greater bhakta and a greater king than Shivaji?

Shivaji was the very embodiment of a born ruler of men as typified in your great Epics. He was the type of the real son of India representing the true consciousness of the nation.It was he who showed what the future of India is going to be sooner or later, a group of independent units under one umbrella as it were, i.e., under one supreme imperial suzerainty.”

I was simply thunderstruck and seemed to myself so small, so foolish and so ignorant; still the spirit of enquiry in me could not be put down even by those eloquent and fiery words of indignation which Swamiji gave expression to, for I thought whatever might be said of Shivaji there could be no explanation for his treacherous conduct towards Afzul Khan, the great Pathan commander sent from the court of Bijapur, whom he is said to have killed under circumstances which any one who has a spark of morality in him could not but abhor.

Still with some amount of hesitation but with a mischievous curiosity to find out how Swamiji could condone this treacherous deed of Shivaji, I begged of him to tell us something about the real life-history of Shivaji and what he thought of his one act which had been considered the greatest blot in his life and on account of which his character had been painted so black.

Then Swamiji began to give a brief account of the life of Shivaji, with great feeling and enthusiasm and we listened to the same with great eagerness and rapt attention; for so engrossing and interesting it was to listen to those soul-stirring words of Swamiji who spoke at the time with so great an earnestness and yet with so much pity and kindness.

It was a pity there was no one to take down all that he spoke that evening in shorthand, nor did I make any notes at the time either, for my mind was so absorbed in following his narrative that the idea of taking down any notes never entered my brain. Yet the indelible impressions he made on even our callous hearts that memorable evening do still persist though somewhat dimmed, and the following is but an imperfect reproduction of those impressions. 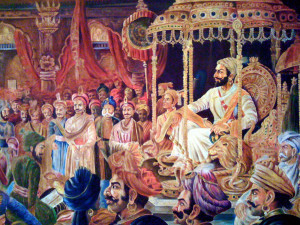 “Doctor,” began Swamiji, “it is a pity that in our schools, History of India written by foreigners alone is taught to our boys. The foreign writers of the Mahratta History can never shake off their bias nor understand the real character and greatness and the inner motive of the actions of Shivaji.

We cannot blame them for their beliefs which more or less depended on the writings of the Mussalman chroniclers who out of spite and hatred, denounced Shivaji as a felon or freebooter.

On the other hand there are many Mahratta bakhars or chroniclers who have written about him but who, true to their ancient puranic ideal, looked upon Shivaji as an incarnation of God born to relieve His devotees from the oppressions of Mahomedan fanaticism and to re-establish the Dharma.

Naturally the foreign writers leaned on the side of the Mussalman chroniclers and considered the account given by the Mahrattas as mere superstition. But fortunately there are many independent Persian manuscripts dealing with the history of Aurangzeeb, Shivaji and the Bijapur kings.

They corroborate the account of the Mahratta chroniclers so far as facts are concerned, though they do not share in their belief of the superhuman nature of the exploits of Shivaji.And if young men who have any patriotic feeling towards the history of their motherland were to make researches in finding out and translating these manuscripts much truer light may be thrown on the greatness of the doings of Shivaji and of many others who helped in the formation of the great Mahratta Confederacy and it will be a valuable addition to our knowledge of the real History of India.”

by  Dr. Mc Nanjunda Rao, From the Archives of The Vedanta Kesari The Echoes of Teachings of Swami Vivekananda IV(November 1914, p. 218-219)

History of Chess
The Meaning and Concept of Arya
Comment