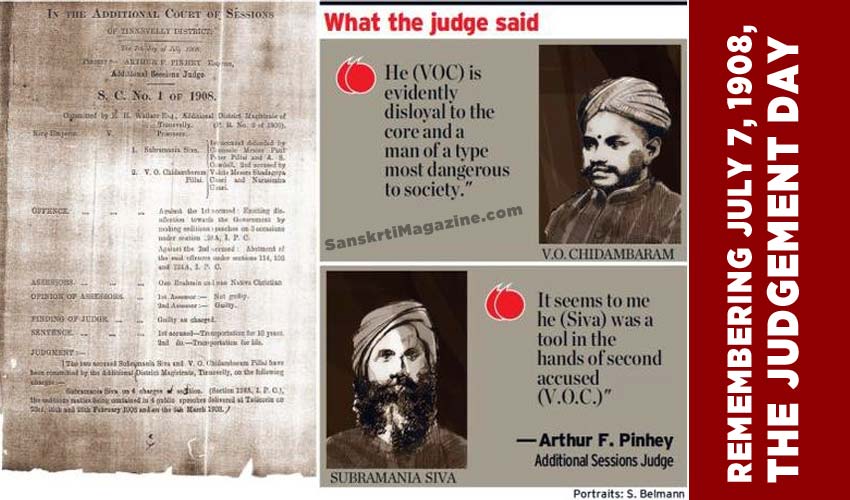 It was the day freedom fighters Subramania Siva and V.O.C. were found guilty of sedition

July 7, 1908 is a date no patriotic Indian of Tamil origin could afford not to know for it is on that day Madurai-born freedom fighter Subramania Siva became the first patriot in the whole of Madras Presidency (encompassing much of present day southern India) to be found guilty and imprisoned on the charge of sedition in British India.

Coincidentally, it was in July 1996 that his birthplace Batlagundu (Vathalagundu in Tamil) was taken away from Madurai district after the latter’s bifurcation to form Theni district. Therefore, it is only apt to recall this July, the history created 106 years ago by Arthur F. Pinhey, the then Additional Sessions Judge of Tinnevelly (now Tirunelveli) district.

A copy of his judgement available with The Hindu, reads: “It seems to me that sedition at any time is a most serious offence. It is true that the case is the first of its kind in the Presidency, but the present condition of other Presidencies where the crime seems to have secured a foothold, would seem to indicate that light sentences of imprisonment of a few months or may be a year or two are instances of misplaced leniency.”

He goes on to state: “The first object of a sentence is that it shall be deterrent not to the criminal alone but to others who feel any inclination to follow his example. Here we have to deal with a campaign of sedition which nearly ended in revolt. The accused are morally responsible for all the lives lost in quelling the riots that ensued on their arrest.”

Though Siva was the prime accused in the case and his mentor V.O. Chidambaram, popularly known as ‘Kappalottia Tamilan’ for having started a shipping company to compete with the British in 1906, was only the second accused, the judge had surprisingly ordered a comparatively lighter sentence of 10 years of transportation on Siva and that of transportation for life on V.O.C.

“The maximum penalty that the law permits would not seem to be too severe for such a case. I think however some discrimination may be made in favour of the first accused. It seems to me he was a tool in the hands of the second accused… Subramania Siva also had the grace not to make vile and baseless allegations against the district authorities.

“For the conduct of the second accused I can see no extenuation. He is evidently disloyal to the core and a man of a type most dangerous to society,” Mr. Pinhey said.

A careful reading of the judgement also exhibits how factors such as the social background, community and caste of the accused as well as those of the witnesses were taken into consideration by the judge while testing the genuineness of their statements.

The two accused were convicted under Section 124A (punishment for sedition), a provision which continues to be in the statute book even in independent India, of the Indian Penal Code in connection with four public speeches delivered by Siva at Tuticorin on February 23, 25 and 26 and March 5 in 1908. V.O.C. was accused of organising those meets though he did not participate in all of them.

Describing the background of Siva, the judge says: “The first accused whose original name was Subramania Iyer, is a relation of the Palayamcottah Inspector of Police, P.W.7 (Viraragava Iyer) and a native of Batlagundu in the Madura district.

“In 1902, he seems to have obtained temporarily the appointment of Mochi in the office of the Special Assistant Superintendent of Police, Sivakasi. Later, it would seem he went to Travancore, and after completing his education there, assumed the garb of a Sannyasi, called himself Subramania Siva and started to tramp the country as an itinerant preacher.”

In the later part of the judgement, while speaking about the most important prosecution witness, Jaffir Hussain Sahib, Tuticorin Police Inspector who reportedly took notes of the Tamil speeches in English, Mr. Pinhey says: “He was a fine specimen of a Mohamedan gentleman.

“His demeanour in the witness box was perfect and he was unshaken by cross examination and I have no doubt he spoke the truth throughout… His notes are in English as he thinks in that language in preference to Tamil, though thoroughly conversant with the latter, and writes English with greater facility.”

On the other hand, rejecting the evidence adduced by Head Constable Kaliyugarama Pillai, the judge says:

“He is certainly the least satisfactory of the police witnesses and it has to be borne in mind that he is a Vellala like the second accused. It seems he was transferred soon after that note was taken.

“The circumstance that he broke his pencil directly the second accused began to speak and consequently lost that speech is I think significant. It possibly explains his transfer.”

The fact that the judgement, penned by a British national, consciously identified every other individual in India by their caste and community is also evident from its following lines: “When it was suggested to the witness that an Iyengar, like the Sub-Inspector and a Smartha Brahmin like the first accused, would not have taken food together at the same hotel… and the circumstantial facts on which the prosecution rely is that Subramania Siva though a Brahmin lived with the second accused at Tuticorin.”

The judgement known as ‘King Emperor versus Subramania Siva and V.O. Chidambaram Pillai’ is a classic piece of document that gives a fair idea of social conditions that prevailed in the country a century ago.

And it is a matter of history that though the conviction imposed on the two great freedom fighters were confirmed by the appellate courts of those days, the punishment was reduced considerably.