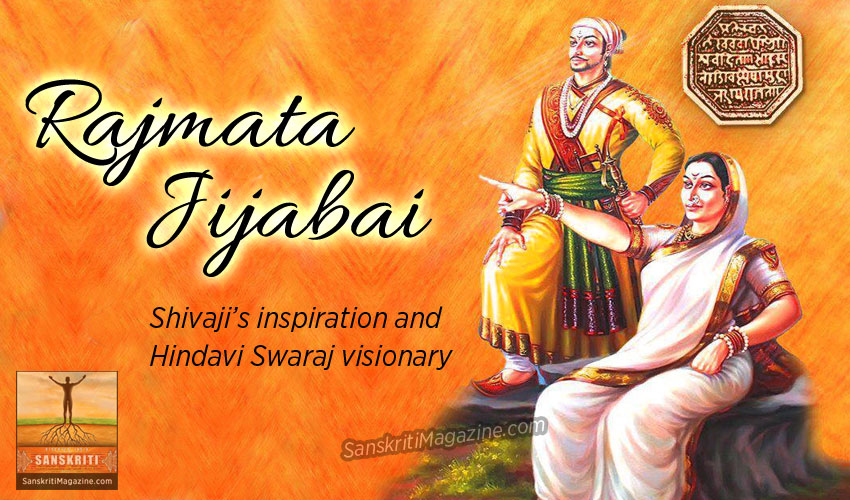 Jijabai was born to Lakhojiraje Jadhav in Sindkhed territory of Vidharbh, Maharashtra in the year 1598 A.D. She was affectionately called as ‘jiu’. Lakhojiraje Yadav was a Yadava, traditionally the rules of Devgiri. So, Jijau was actually the princess of Devgiri. But Lakhojiraje, along with his three sons accepted to be chieftains in the Sultan’s military. This was something that irked Jijau.

Maharashtra was so subjugated that Brahmins would go to the Sultan to settle their disputes like, ‘Who should proffer the offerings in a religious ritual?’ The Sultan’s army would often abduct the wives of the local Kshatriyas, and they would meekly offer bribes to have their wives back. In a state where Brahmins and Kshatriyas had discarded Dharma (righteousness) and valour, nothing much could be expected of the others ! Jijau would seeth with fury at the manner in which the Hindus were being treated by the invaders. Thus, right from the childhood, she developed an intense hatred towards the invaders who had used every ploy to humiliate Hindus.

Jijau got married to the most valorous general of the Sultan’s army, Shahajiraje Bhosale. Thereafter, she lived in Pune. Once, when all the Maratha sardars had come together, an elephant belonging to Khandagle suddenly became violent and went on a rampage. In the ensuing chaos, the Sardars used weapons which wounded the elephant. Unfortunately, this led to a misunderstanding between the Bhosales and the Jadhavs who took up arms against each other. Petty hostilities between the Maratha sardars flared up. Jijau and Shahaji had to witness their near and dear ones die. They earnestly wanted both the families to forgo bitterness of the past and rise above personal ego; put an end to the hostility between the two families and fight the foreign invaders and establish Hindu Kingdom. But the Maratha Sardars were hardly convinced by the noble thoughts.

The Nizam had sent Lakhojiraje along with his army to Junnar to capture Shahajiraje. As Jijau was pregnant, it was not possible for her to travel to Pune on horseback. So, Shahjiraje placed Jijau under the care of Vishwasrao and Vaidhyaraj Nirgudkar (a doctor) in the Shivneri fort, and proceeded to Pune. Meanwhile Lakhojiraje reached Junnar and met his daughter at Shivneri fort after many years.

Jijau said to her father, ‘Marathas are fighting with each other for sake of mere ego and greed. If their valorous swords unite, foreign invaders will be vanquished in no time. It is a disgrace to be working under invaders for your livelihood, you must give it up’. Jijau’s intense patriotism and love for Dharma touched her father. Her earnest thought compelled Lakhojiraje to introspect. When he met Shahajiraje at the foothills of Shivneri, Lakhojiraje was pacified and that put an end to the hostility between Jadhavs and Bhosales forever.

Jijau, who always kept the flame of vengeance burning, through hardship !

Mahabat Khan, a Mughal general, abducted Godavaribai in broad daylight. Kheloji made no efforts to rescue his wife; but Shahajiraje promptly rescued his sister-in-law Godavaribai from Mahabat Khan and in due course of time killed Mahabat Khan who had fled.

Nizam called Jijau’s father, Lakhojiraje and her three brothers in his royal court unarmed and killed them deceitfully. This callous event tore Jijau’s heart apart. Her maternal family was ruined, but she did not forgo her yearning for ‘Swaraj’.

On Adilshah’s orders, Rairao attacked Pune (Shahaji’s territory) and burnt it to ashes, committed innumerable atrocities on the common man and killed many, destroyed the fields and houses. Pune, known as ‘Punyabhumi’ was sullied by the marauding forces.

These devastating incidents, occuring one after another, made a deep impact on Jijau who was residing at Shivneri. She was unable to endure this situation and felt like forsaking her life, but she consoled herself, did not lack composure and kept the flame of vengeance burning !

Jijau would earnestly pray to Bhavanimata ‘To destroy the villainous and for the protection of the Nation and Dharma, bless me with a son like Shri Ram or a daughter  like Goddess Durga who would vanquish the enemies’.

Jijau would feel like wielding a sword, sit on a tiger and slay the enemies. She would often dream of Dharmik war and establishment of Ramrajya.

Jijau, an ideal mother who instilled values like patriotism and love for Dharma in Shivaji

Shivaji was born on Vaishakh Shukla Paksha Trutiya (1627 A.D.) at Shivneri fort. Right from his childhood, Jijau would tell Shivaji about the lives of Shriram, Maruti, Shrikrishna and also from Mahabharat and Ramayana to make him pious and patriotic. Thus, she molded him into an ideal ruler by sowing seeds of devotion towards the nation and Dharma. She was not only a mother to Shivaji, but also a great source of inspiration.

When Jijau went to stay in Pune along with Shivaji, she founded Kasbapeth Ganapati temple and renovated  the Tambdi Jogeshwari and Kevereshwar temple. Besides being a patron of temples, Jijau listened to bhajan-kirtans by Saints, studied Sanskrut scriptures and religiously performed the vowed religious observances. She was a chaste wife and dutiful mother. Although she was religiously inclined, her devotion was above rituals. She had lot of merit that she gathered by abiding to Dharma in her daily life. This gave her immense strength to face difficult situations.

She had a strong faith that she was blessed by Goddess Bhavani and Mahadev. She always backed her valorous husband and son fearlessly and resolutely. When her husband or son would be in perilous situations, she would ardently pray to Bhavanimata night and day, for their protection and safe return. She strongly believed that our efforts bring success to our doorstep only with the grace of God.

Jijau played all the roles in her life such as daughter, sister, wife, daughter-in-law, sister-in-law, mother, mother-in-law, grandmother just as the scriptures have mentioned. She was loved and respected by all her family members and looked upon as the support system in the family. In all aspects, she was an ideal Hindu woman. Entire Hindu community is grateful to God for having set an example before us in the form of Rajmata Jijau. A prayer unto the divine feet of Bhavanimata and Shambu Mahadev that, ‘May all Hindu women be inspired by Jijau to be ideal women !’

Jijau was adept in warfare, possessing skills like horse riding, as well as mastery over the sword.  Wielding a sword, she had decided to declare war against Siddi Jauhar to rescue Shivaji from the encircled fort of Panhala.

The Mughal commander Afzal Khan had killed Jijau’s elder son, Sambhajiraje in a military expedition of Kanakgiri by firing a cannon deceitfully. Later Afzal Khan set his sights on capturing Shivaji Maharaj. In this endeavour, he was unstoppable; destroying temples, idols of Deities, burning fields and inhumanly murdering people, as he was headed swiftly towards Rajgad. In this situation, if Shivaji Maharaj was to clash with Afzal Khan’s army, the Maratha army’s defeat was inevitable. Also if Shivaji was to meet Afzal Khan to sign a treaty, he would certainly not return. So, Shivaji’s sardars and his learned ministers advised him to move to a safe place, away from Afzal Khan. But, Jijau ordered Shivaji to meet Afzal Khan and slay him and display the Maratha valour to the world.

Jijamata would keep a close watch on socio-political affairs of the state and in times of need would efficiently handle the administration.

Shivaji Maharaj was trapped for four months when Siddi Jauhar had besieged Panhala fort. Jijau had shouldered the responsibility of Swaraj then. Till Shivaji escaped from the besieged fort, Jijau led the Marathas who were fighting Shaistakhan thus protecting Swaraj.

While proceeding to Agra, Shivaji Maharaj entrusted Swaraj in the safe hands of Jijau. Shivaji Maharaj’s imprisonment by Aurangazeb did not deter Jijau. Mughals from South, armies of Adilshah and Kutubshah, British and Portuguese invaders in Konkan and Gomantak (Goa) and vast army of Siddi Jauhar in Murud Janjira all had trained their greedy eyes on the Hindavi Swaraj. Jijau, though aged, protected her people from these enemies for more than 8 months. Beyond this, she accomplished completion of Sindudurg fort, recaptured a fort from the enemies, attended to problems of the subjects and showed her efficiency in governing.

She promptly delivered justice to her subjects to settle numerous problems related to their family and state administration and well as social, religious and financial issues. She was well versed in scriptures, strong, principled and unbiased and so, she was able to deliver perfect and Dharma abiding justice. As the culprits were duly punished, her subjects looked upon her as a ray of hope and were blessed with Dharmrajya / Ramrajya.

She never distanced herself from her subjects to enjoy pleasures as Rajmata or Queen mother. She was always a responsible mother of a responsible king. She was the pillar of swaraj.

Her decisiveness and perceptive nature was so valuable and par excellence that Shahjiraje and Shivaji Maharaj used to value her opinion while taking major political decision. She was extremely good at planning strategies and war tactics.

Shahajiraje signed the treaty of Mahul and was compelled to leave Maharashtra and go to Karnataka with his elder son. Although this incident scattered her family and uprooted Swaraj, Jijabai was steady. Jijau stayed back in Maharashtra under the pretext of taking care of Pune and Supe Paraganas given by Adil Shah to Shahjiraje and brought up Shivaji as an ideal son.

She taught her grandson Sambhaji, Urdu and Persian, to help understand the enemy’s plans and strategies.

Shivaji Maharaj lost many of his territories and 23 forts to Raje Jaisingh in the treaty of Purandar, but he had a narrow escape from the clutches of Mughals. He did not let the enemy wreck Swaraj completely. Jijau expressed her amazement over Shivaji’s commendable achievement. Her positive approach encouraged Shivaji and he set about re-establishing swaraj with a renewed enthusiasm.

As Jijau was Shahjiraje’s wife and Chatrapati Shivaji Maharaj’s mother, she was the queen and Rajmata too. As her prime concern was well-being of her subjects, she always gave priority to her duties as a queen or rajmata rather than just emotional bondages as a wife or a mother.

Hindus were oppressed under the barbaric atrocities of the Mughals in north India and the AdilShahs, KutubShahs in south India. Shivaji Maharaj, along with his mavlas was trying to reign in these demons. Shivaji Maharaj was the lone survior among Jijau’ sons and he too had to face many life threatening odds. But that did not deter Jijau who braved all this and blessed Shivaji in all his endeavours.

Shahjiraje’s death shattered Jijau but she endured it despite her advanced age. She refrained from committing sati for the sake of swaraj. She overcame grief and helped Shivajiraje  by guiding him in the administration.

Barely 12 days after witnessing the golden moment of Shivaji’s coronation Jijau breathed her last in Pajad 1674. She devoted her entire life for swaraj and set a personified example of what an ideal Hindu women should be like, in the form of Rajmata Jijau.