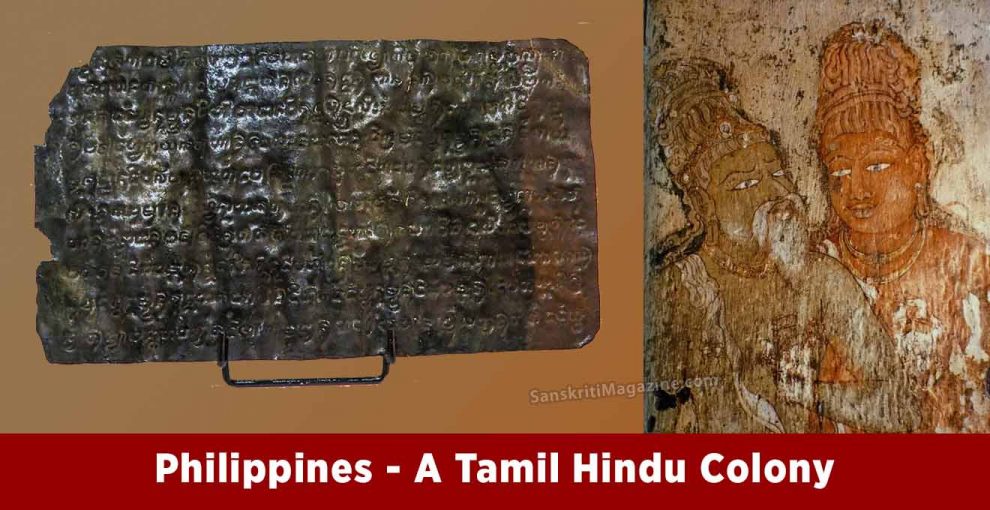 The Pre Spanish history of Philippines was shrouded in mystery. Now the mist around the Philippines is clearing thanks to recent discoveries. The Spaniards, wherever they went, destroyed the local culture, plundered their gold and massacred the people. They spared those people who converted to Christianity.

The Philippines is a country of 7000 islands. Nobody asked or wondered what those places were called before they named it “ Philippines” just 400 years ago. They had their own names, their own culture, but they were ignored as primitive and uncivilized. Fortunately one inscription and one golden statue escaped the wrath of the religious fanatics.

Hindu music instrument Kadjabi is still played in the Philippines. Hundreds of Sanskrit words are used in the islands even today.

A five and a half inch tall golden statue recovered from Mindanao in 1917 is kept in the Field Museum of Natural History in Chicago. Vishnu’s vehicle Garuda was found in Palawan. The gold statue is that of a Buddhist goddess known as Tara. It weighs 4 pounds (approximately 2 Kilos). It is dated 1200 to 1300 AD. It was found in Wawa River after heavy rains. Lot of gold was taken back to Spain and melted. Only a few escaped from the invaders.

Luzon in the Philippines was ruled by Lakans (local chieftains) from 900 AD until 1571. An inscription found there known as Laguna copperplate inscription dated 900 AD contains Sanskrit words and place names. The inscription which was found in 1989 contains information about debts cleared by the ruler of Tondo. Namwaran along with his children Lady Angkatana and Buka were cleared of debts. It was written in Kawi script. Lord Minister Jayadewa issued the order. The inscription is kept in the National Museum of the Philippines in Manila. A lot of Sanskrit words such as Swasti, Visaka,Chathurthi, Suwarna, Krishnapaksha, Somawara, Dewata, Jyotisa are in the text. Full text and translation is available in Wikipedia.

Wikipedia article says 25 percent of words in Philippines native language are from Sanskrit and Tamil. Look at the list given by Wikipedia:

Sanskrit and Sanskrit-derived words common to most Philippine languages:

Ramayana in the islands

Rajendra Chola, son of the Raja Raja won many countries in South East Asia. The inscription named all the countries and islands he won around 1025 AD. K.A.Nilakanta Sastri, the greatest authority on South Indian History has written about his conquests. But when he wrote about the Cholas 75 years ago Laguna inscription was not discovere. Only Rajendra’s Tamil inscription was known. Now we know Philippine islands were under Hindu rulers even before Rajendra invaded S.E. Asian countries.

Scholars identify the following places in the inscription: