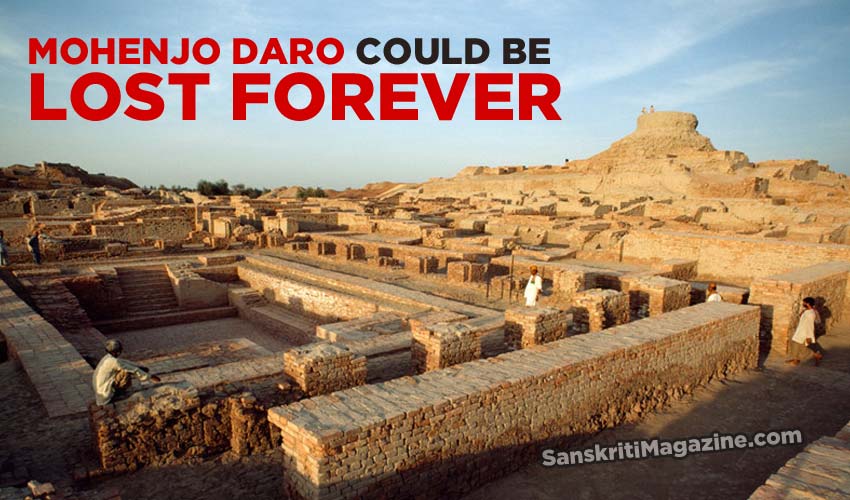 Pakistani officials say they are doing their best to save one of the most important archaeological sites in south Asia, Mohenjo Daro. But some experts fear the Bronze Age site could be lost unless radical steps are taken.

It is awe-inspiring to walk through a home built 4,500 years ago. 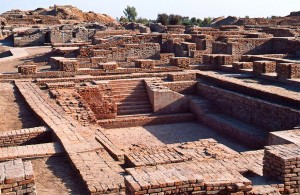 Especially one still very much recognisable as a house today, with front and back entrances, interconnecting rooms, neat fired brick walls – even a basic toilet and sewage outlet.

Astonishingly, given its age, the home in question was also built on two storeys.

But it is even more impressive to walk outside into a real Bronze Age street, and see all of the other homes lining it.

And to walk the length of it, seeing the precise lanes running off it before reaching a grand, ancient marketplace.

This is the marvel of Mohenjo Daro, one of the earliest cities in the world.

In its day, about 2600 BC, its complex planning, incredible architecture, and complex water and sewage systems made it one of the most advanced urban settings anywhere. It was a city thought to have housed up to 35,000 inhabitants of the great Indus civilisation. 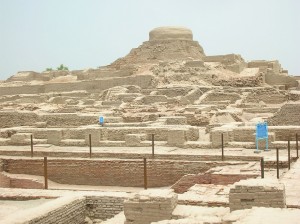 While I was overwhelmed by the scale and wonderment of it all, my eminent guide to the site was almost in tears of despair.

“Every time I come here, I feel worse than the previous time,” says Dr Asma Ibrahim, one of Pakistan’s most accomplished archaeologists.

“I haven’t been back for two or three years,” she says. “The losses since then are so immense and it breaks my heart.”

Dr Ibrahim starts to point out signs of major decay.

In the lower town of Mohenjo Daro, where the middle and working classes once lived, the walls are crumbling from the base upwards. This is new damage.

The salt content of the ground water is eating away at the bricks that, before excavation, had survived thousands of years.

As we move to the upper town where the elite of the Indus civilization would have lived, and where some of the signature sites like the large public bath lie, it appears even worse.

Some walls have collapsed completely, others seem to be close to doing so.

“It is definitely a complicated site to protect, given the problems of salinity, humidity and rainfall,” says Dr Ibrahim. “But most of the attempts at conservation by the authorities have been so bad and so amateur they have only accelerated the damage.” 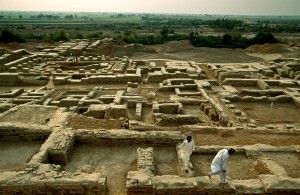 One method used has been to cover all the brickwork across the vast site with mud slurry, in the hope the mud will absorb the salt and moisture.

But where the mud has dried and crumbled, it has taken with it fragments of ancient brick, and the decay goes on underneath.

There are even parts of the site where millennia-old bricks have been replaced with brand new ones.

“In a way, it is testament to Mohenjo Daro that it is still standing, given everything that has been thrown at it in the last few decades in the name of conservation,” says Dr Ibrahim.

Even the Mohenjo Daro museum has been looted, with many of its famous seals (thought to have been used by traders) among the artefacts that were stolen. They have not been recovered.

A guide at the site says he too has seen the dramatic changes in its condition and upkeep.

And while Pakistani visitors do still come on public holidays, he says very few foreign tourists visit Mohenjo Daro now. He suggests that might be because of Pakistan’s security problems.

Given the damage being done to this World Heritage Site, a poor tourism strategy has become the least of its troubles.

It was the government of Pakistan that was in charge of Mohenjo Daro for decades, but recently responsibility was handed over to the provincial authorities in Sindh. They have now set up a technical committee to rescue the site.

“We need urgently to listen to experts from all fields to save Mohenjo Daro,” says Dr Ibrahim.

“Yes, there is salinity, but local farmers have worked out how to overcome that problem so why can’t we? But we have to do something soon, because if things carry on like this, in my assessment, the site will not last more than 20 years.”

One saving grace may be that some of the city remains unexcavated and so remains protected.

Some experts have gone so far as to suggest the entire site should be buried again to halt its decline.

It is a sign of the desperation of those who love Mohenjo Daro, and who are pained to see a city that once rivalled sites of its contemporary civilisations in Egypt, Mesopotamia and China, losing its glory in this undignified way.

Ghosts of 1962: Leaked military report blames Nehru and an ill-prepared army for defeat by China