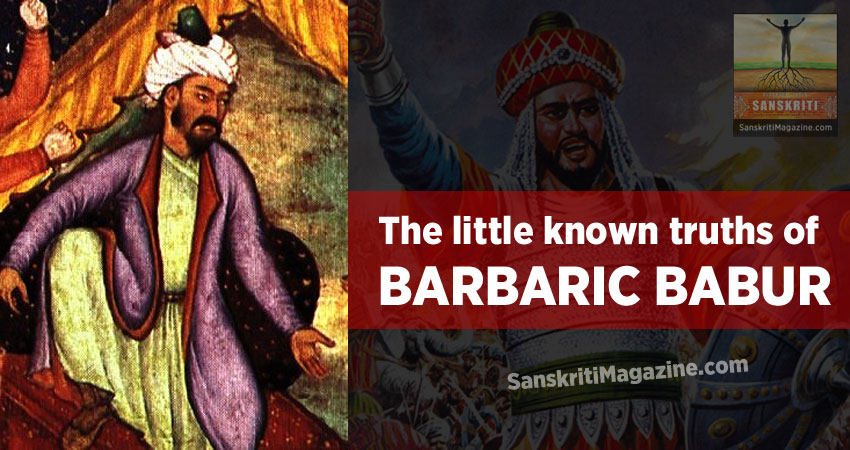 Babur was born in the fifth generation of notorious Taimur on 14th February 1483. His father was Umar Sheikh who was the ruler of Farghana. In June 1494 at the age of only 11 years Babur became heir to Umar Sheikh. In those days his income was limited and thus could afford looking after only a few hundred horsemen soldiers.

Babur in quest of wealth and power attacked Samarkand several times in which thrice he came out victorious and thrice he was defeated. In 1504 Babur attacked Iran and trouncing its capital Mashad (Khurasan Province) and also Kabul. While ruling Afghanistan Babur came in contact with India and came to know a lot of things about the land. In 1517 for the first time and in 1519 for the second time he came down from the plateau of Afghanistan upto the plains of India.

In 1523 on the ruler of Punjab Daulat Khan Lodhi’s invitation Babur entered Punjab. But the ruler of Delhi Ibrahim Lodhi gave him a heavy defeat and thus Babur had to flee from India. Babur had 12 thousand soldiers in his army who were utterly undisciplined. These soldiers had only looting intentions of Indian wealth. In 1523 Babur had came to India via Peshawar and after crossing over Sindhu river upto Sialkot with no resistance whatsoever he was able to enter Saiadpur (now Amnabad) which is situated at 15 Km. south east of Gujranwala. In Amnabad, the soldiers of Babur mercilessly killed and looted whatever came in their way. Amnabad looked like a lost rite grounds of dead bodies. Females were forcibly kidnapped and put through all kinds of cruelty.

In this Shabad Guru Nanak Devji says o! Bhai Lalo! My Master – Akal Purakh has given me premonition about Saidpur (Amnabad) happenings in near future.

Guru Nanak Dev ji says O! Bhai Lalo! I’m watching this great sorrowful condition of women in near future because of the lustful invaders putting them to great disrespect and cruelty. It is not that only Hindu women have to put up with this even the local Muslim women would not be spared. The Muslim women would then recite ‘Ayats’ from Quran and would take the name of Khuda but to no avail. Tragedy would come at a very big scale. Not only the women of high caste Hindu but low caste Hindu women would have to undergo the same trauma. There shall be sung blood riddled songs all over Saidpur (Amnabad) because of these bloody marriage ceremonies. That means large scale deaths wailings and crying everywhere.

In marriages saffron is sprinkled but in those Satanic marriages instead of that blood would be tossed around. Meaning – a lot of bloodshed would take place.

Guru Nanak Dev ji narrated that those Saidpur (Amnabad) women who wore plaits of black hairs on their heads were humiliated by Babur’s invading army by shaving their heads off.

Those women became widows. Those women who had always reddened their hair parting lines with ‘Sindoor’ were made to own clay into them. Meaning – the women were humiliated. Those women living in big houses were made to vacate them and were banned from going anywhere near them. Guru Nanak Dev ji narrates that there had been a time when those very beautiful women were married – at that time their husbands were all the things to beautifying them. Those women had come to their husband’s houses wearing ivory bangles in their arms in special hand held ‘Dolie’ carriages. In their husbands houses those women were wearing glass embedded hand fans and the water of gifts was sacrificed over their heads with much gusto and affection.

Babur’s soldiers put nooses around the neck of these women and their broken pearl garlands scattered their beautiful pearls all across the floor. There were times when these women had been intoxicated by wealth and youthfulness of theirs. But today their wealth and beautiful youthfulness has become their enemies. Babur had allowed his soldiers to commit all kinds of cruelty and atrocities on those women. These soldiers didn’t only insult, molest and humiliate those rich and beautiful women but had their way with them forcibly.

Guru Nanak Dev ji was arrested in Saidpur (Amnabad) by Babur for carrying dialogue with the masses of the nation against tyranny.

In Babur’s own words written in Tuzuk-i-Bãburî, he suffers irreparable damage if it is denuded of the rich hues of horrible cruelties in which he habitually indulged. The lurid details he provides of his repeated massacres of the infidels, leave no doubt that he was mighty proud of his performance. He was particularly fond of raising higher and higher towers of Hindu heads cut off during and after every battle he fought with them. He loved to sit in his royal tent to watch this spectacle. The prisoners were brought before him and butchered by his “brave” swordsmen.

On one occasion, the ground flowed with so much blood and became so full of quivering carcases that his tent had to be moved thrice to a higher level. He lost no opportunity of capturing prisoners of war and amassing plunder. In the dynasty founded by him it was incumbent upon every king that he should style himself a Ghãzî, that is, slayer of infidels. When he broke vessels of wine on the eve of his battle with Rana Sangram Singh, he proclaimed that he would smash idols in a similar manner. And he destroyed temples wherever he saw them.

We shall refer to the English translation of Babur Nama by Annette Susannah Beveridge published in 1922. This translation was done directly from whatever portions of original Turkish manuscript were available. These suffice to establish the true character of Babur. You can download a scanned copy from HERE.

In Page 120-121 of the biography he says that he was not much interested in his wife but was maddened by a boy named Babri. He confesses that he had not loved anyone like he was mad for this boy. He used to compose verses in love of the boy. For example:

“There has been no lover except me who is so sad, passionate and insulted. And there is no one more cruel and wretched than my lover!”

Once Babur was roaming with his friends when Babri came in front of him in a lane. Babur had loss of speech and could not even look at him due to excitement. He narrated:

”I get embarrassed looking at my lover. My friends stare at me and I stare at someone else.”

He admits that in passion and desire of youth, he got mad and used to roam around naked head and naked foot without even looking at anything else.  He writes:

”I used to get mad in excitement and passion. I could not think that lovers have to face this. I could not go away from you, nor can I stay with you due to high level of excitement. You have made me completely mad, O my (male) lover!”

Now this proves beyond doubt that:

a.   Babur and his gang were homosexual and child molesters. Punishment for these, as per Islamic Shariat, is death by stoning. This is prevalent even today in Islamic countries.

b.   Babri Masjid is nothing but a memoir in name of Babur’s sex-partner.

Does Islam consider monuments created by or named after such sexual perverts to be mosques or symbols of shame?

Hence, it is clear that Babri Masjid was nothing but a symbol of homosexuality and child-molestation.

(Only a few samples from this barbaric vulgar autobiography of Babur are being provided as it is too brutal and gross for detailed reading.)

– Page 232: He writes that his gang beheaded the innocent Afghans who came to him for truce, and then created a pillar from these heads. The same feat was repeated in Hangu where 200 Afghan heads were killed to create a pillar.

– Page 370: Because people of Bajaur did not believe in Islam, more than 3000 people were murdered and their wives and children were taken as captives.

– Page 371 – Several heads of captured people were sent to Kabutl, Balkh and other places to spread news of victory.

– Page 371 – A tower of cut heads was setup on ground to celebrate victory.

– Page 371 – There was a wine party on Muharram where we drank whole night. (Translator notes here that Babur was a heavy drunkard till end of his life). A large portion of Baburnama describes these wine parties.

– Page 373 – Babur took such intoxicants once that he could not go even for prayers. He further says that had he taken such intoxicants today, he would not have produced half the intoxication.

– Page 374 – Babur fathered several children from several women in his brothel. His first wife promised to adopt all these illegitimate children, whenever they are born in future, because several children born to her could not live.

– Page 385-388 – Babur was so happy with birth of Humayun that he went to a boat with his friends and drank wine whole night and ate narcotics. Then they fought with each other due to intoxication and party broke up. After a similar party, he vomited a lot and forgot everything by morning.

– Page 527 – A party was given in the pillared porch of the domed building in Agra.

Almost all pages of his autobiography describe how he looted, threatened, murdered and plundered wherever he went and ate ‘haram’ meat. Note that the way Babur includes all this in his autobiography implies that he was proud of all this. One would shudder to imagine what all other crimes he had committed that do not form part of this self-eulogizing biography.

Babri Masjid, named after Babur’s homosexual partner Babri, is a symbol of sexual perversion of a murderer and rapist.

To call it a ‘heritage’ and implicating those who destroyed such a symbol of ‘barbaric perversion’ demonstrates how wretched we have become down the course of history.

Chhatrapati Shivaji: The Legendary Maratha King
A peep into Afghanistan’s Hindu Past
Comment