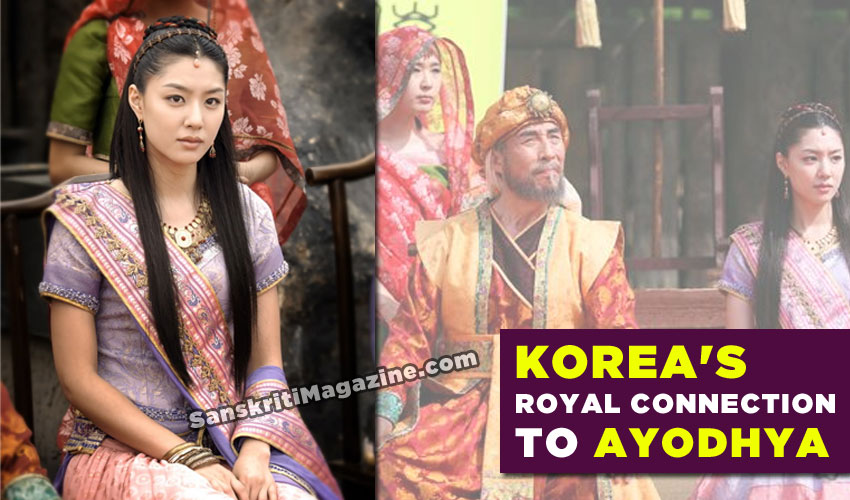 The twin fish, state symbol of Uttar Pradesh and commonly found on ancient buildings of Ayodhya, is the biggest clue to the link and the route undertaken by Kaya (Kara/Gaya) royals to Korea (and Japan).

The Atharva Veda called Ayodhya “a city built by gods and being as prosperous as paradise itself”.

Links between India and Korea are not only modern-day trade links with commercial names like LG, Hyundai and Samsung making their presence felt in India.

In 48 AD, Queen Suro or Princess Heo Hwang-ok is said to have made a journey from Lord Ram’s birthplace to Korea by sea, carrying a stone which calmed the waters.

The stone is not found anywhere in Korea and is now a part of crucial evidence that the princess belonged to the city of Ayodhya in India.

“This stone is only found in India, proof that it came from there to Korea,” said Song Weon Young, city archaeologist of Kimhae, a city near the big industrial town of Pusan.

People of Kimhae were so fascinated by these links that they started research on it several years ago.

They also ran into a symbol of the Kaya Kingdon with two fish kissing each other, similar to that of the Mishra royal family in Ayodhya.

And in the mainly Buddhist city of Kimhae, the fact that Ayodhya has now become the epicenter of a religious divide is an upsetting one

“I am aware of the problem and I feel sorry that Ayodhya is such a volatile city,” said a Kimhae resident.

The Princess is said to have given birth to 10 children, which marked the beginning of the powerful dynasty of Kimhae Kims. Kim Dae Jung, a former President also belongs to the same family name.

But even at the centre of these links lies a strong sense of commercial exchange between Korea and India.

The stone represents Kaya’s cultural heritage which did not stay in one place, and the stone indicates that commercial exchange has been on since the Queen came from India.

Thousands of miles away from Ayodhya, the stone is a small piece of history. The people in the city seem quite proud of their links with India, especially because Queen Suro gave rise to the Kim dynasty, a powerful family name in the country.

“I share my genes with the royal family of Ayodhya. Travelers from both these countries not just traded goods, but also genes. And I hail from the Kara dynasty, whose first woman was the princess of Ayodhya, who married the first Kara king. Her brothers went on to become the Kings of Ayodhya and this is how I am genetically connected to the holy city,” said Prof Kim.

The archaeologist, whose work on the princess of Ayodhya marrying the prince of Korea’s Kara dynasty in 4th century AD has received widespread recognition, is on his fifth visit to the Holy city in search of more evidence for his study.

On his three-day visit to the state, he not only visited Ayodhya but also made a slide presentation on historical evidences of cultural links between Ayodhya and Korea, on being invited by the state government’s Ayodhya Shodh Sansthan. “The queen of Korea’s biggest dynasty Hoh was the daughter of Ayodhya and in that manner, Ayodhya is like our mother city. Princess Ho traveled by sea route and married King Kim Suro of Kara dynasty. He was the first king and the entire Kara clan, which comprises over about two-third the population of Korea are its descendants,” said Prof Kim.

The twin fish, which is the state symbol of Uttar Pradesh and is found on almost all the ancient buildings of Ayodhya, is the biggest clue to the link and the route undertaken by Princess Hoh, says the professor. “I have pictorial evidences. The twin fish symbol is originally from the Mediterranean states and it traveled to this part of the world and settled around Lucknow. But the same twin fish symbol can also be seen in ancient buildings in Nepal, Pakistan, China and Japan and the gate of royal tomb of King Suro in Kimhae city in Korea,” said Prof Kim.

But, it is not this connection alone that has brought the archaeologist here as he also seeks a cultural connect between Ayodhya in Uttar Pradesh and Kimhae city in Korea.

“For the last 40 years, I have been tracing the route taken by the princess between Ayodhya and Kimhae city and after five visits, I have all the evidence to culturally connect the two cities.”

Nearly six years ago, the Korean government had declared Ayodhya as the sister city of Korea and a monument in the memory of Princess Hoh was also established here in the city.

“The Kara clan is the biggest community in Korea and we like to visit our queen mother’s place. Through these visits, we are making attempts to talk to the Uttar Pradesh government to open up their doors for strengthening cultural relations between the two countries,” said Prof Kim.

“Through these interactions, we have been able to find new facets of Ayodhya and now in addition to being Lord Ram’s birthplace, the city has another significance attached,” said Singh. 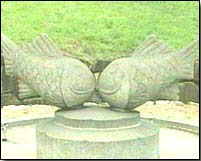 Pairs of  Shachihoko, gargoyle-like carp, often appear on opposite ends of the ridge of a castle roof to symbolise diligence and ecstasy. There is also a fertility association with this pair since one fish is male and the other female.

In Japan, the fish means well-being, happiness and freedom. It is one of the Eight Auspicious Symbols used in Buddhism imported from China. The fish symbolises living in a state of fearlessness, without danger of drowning in the ocean of sufferings, and migrating from place to place freely and spontaneously.