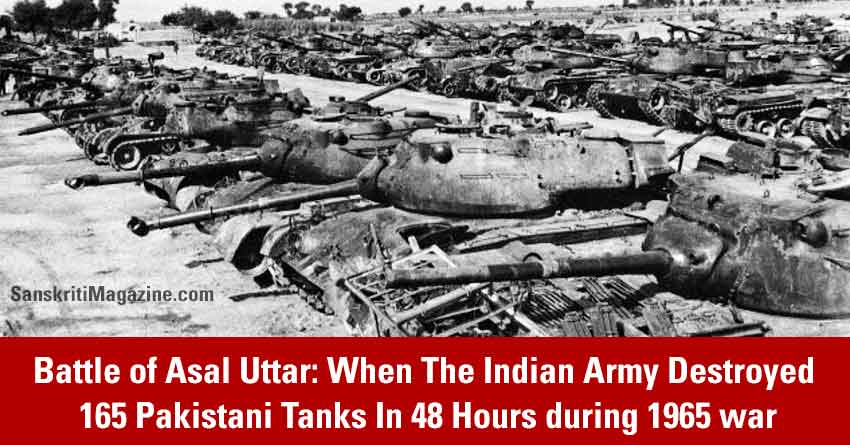 Asal Uttar is a village of memorials. There are all sorts — big ones, small, by the roadside, in the fields. These, apart from the occasional dilapidated bunker, are probably the only signs that Asal Uttar, a village 12 km from the international border with Pakistan in Punjab’s Tarn Taran district, was the battlefield where Indian and Pakistani armies fought one of the fiercest tank battles of the 1965 war.

This is where Pakistan’s 1 Armoured Division was stopped in its tracks after a decisive battle with the Indian forces, thus earning the village and its surrounding areas an entry into the official history of the 1965 war as the place where the ‘Battle of Asal Uttar’ was fought.

Early in September, the Pakistani Army had captured Khemkaran town, 5 km from the border and 7 km from Asal Uttar. But as they moved towards Asal Uttar and neighbouring villages, the Pakistani troops were pushed back by the Indian 4th Mountain Division and later decimated by the 2nd Armoured Brigade of the Indian Army in a decisive battle between September 8 and 10. The Pakistan Army lost 97 Patton tanks, its showcase US-made hulks, in this encounter.

Fifty years later, it’s hard to imagine this as the theatre of war where the Pakistani Pattons and the Indian Shermans kicked up dust and fear in equal measure. Asal Uttar and its neighbouring areas have their share of war stories — of how Pakistani tank crews fled with the engines of the Pattons and how an entire armoured Pakistani regiment surrendered to the Indian Army.

After the war, the captured Pattons were displayed near Bhikkiwind, a town that’s about 10 km from Asal Uttar, and the place briefly came to be known as ‘Patton Nagar’.

On the outskirts of Chima, a village neighbouring Asal Uttar, lies the final resting place of Company Quartermaster Havildar Abdul Hamid who was awarded the nation’s highest gallantry award, the Param Vir Chakra, for shooting down three Pattons. He was killed barely 100 metres from where his grave now lies, when he was taking aim at a fourth tank.

Paiara Singh is the caretaker of Hamid’s grave and of a memorial the Army set up to honour the soldier. “My brother used to look after this grave and now I do and after me my son will do the same,” he says, adjusting the chadar on the grave. The green chadar that flutters in the wind bears the formation sign of the Army’s 7 Infantry Division which is responsible for the defence of the area.

“Had the Pakistanis not been stopped by ‘them’ here, they would have had a clear run till Amritsar,” says Paiara, reverentially referring to Hamid in third person. Piara gets Rs 5,000 a month for his job and an occasional dole of rations from the Army.

Lt Col Nagindar Singh (retd), a former commanding officer of the Indian Army’s 3rd Cavalry who took part in the Battle of Asal Uttar as a young captain, says that everyone was highly motivated to take on the enemy and stop them in their tracks. “Our regiment was at the forefront with three squadrons deployed there in Asal Uttar and a fourth one in Rajatal near Attari,” he recalls. The regiment won several gallantry awards in the battle along with a Mahavir Chakra for the Commanding Officer, Lt Col Salim Caleb.

The town of Khemkaran remained under Pakistani occupation despite attempts by the Indian Army to retake the town. An attack mounted by the Indian Army in the dying hours of the war failed and Lt Col Anant Singh, Commanding Officer of 4 Sikh, and his troops were captured by the Pakistan Army.

Residents of villages near Khemkaran say they fled their homes when the Pakistani troops moved in and only returned several months after the war.

But 50 years later, people in these villages, even those of the post-1965 generation, have run out of war stories to tell. At Rattoke Gurdwara, a village that was occupied by the Pakistani Army, Niranjan Singh and Jagir Singh would rather talk about the poor drainage in the village and the erratic electricity supply than about ‘threats’ from Pakistan. “Come with us and see how we live in unhygienic conditions. No government official or politician bothers about us,” says Niranjan.

Haji pir Pass served as a vital link between Pakistani infiltrators in Poonch and their bases in Pakistan Occupied Kashmir. India’s 19 Infantry Division along with the 68 Infantry Brigade launched a pincer movement (two sides of simultaneous troop movement closing together behind enemy forward positions) to annihilate the enemy.

Operation Bakshi, the Northern pincer, consisted of the advance of 1 PARA from Uri to Sank and further to Lediwali Gali in order to reach Hajipir Pass. 19 Punjab was to take the Bedori approach to the Pass. Operation Faulad, the Southern pincer, was to be undertaken by 93 Infantry Brigade of 25 Infantry Division. It was essential to capture these intermittent features to open the axis to Haji Pir Pass.

The task was daunting, as even while being under heavy enemy fire with constant threat to life, the Indian soldiers had to climb steep mountains. The assault was carried out in pitch darkness, made worse by the non-stop rain which made the terrain slushy and slippery.

Undaunted, Haji Pir was captured on August 28, 1965. Major Ranjit Singh Dayal of 1 PARA, who launched the final assault on the Pass, advanced from an unexpected direction and caught the enemy by complete surprise. He was awarded the Maha Vir Chakra for displaying outstanding courage and leadership.

On September 12, India’s 54 Infantry Brigade was ordered to plan an advance up to Ichhogil canal astride GT Road, which involved the capture of Dograi. The main Pakistan defences were along the Ichhogil canal and Dograi. On September 21, 3 Jat carried out extensive patrolling at Dograi which was to be attacked that night. They found that the Pakistanis were well-entrenched, “some huddled over machine guns in pill boxes and others tucked into the buildings of Dograi behind light machine guns and rifles, with piles of ammunition and grenades to hand”. The forming up place was just 400 metres from the nearest enemy trench, and to reach it, 3 Jat had to pass through the minefields in a single file. Suddenly, the Indian forces were subjected to intense fire, setting off a fierce battle along the east bank of Ichhogil canal. The company charged the bank undaunted by the enemy minefield. Grenade and hand to hand fighting took place inside the enemy defended locality. The price paid by the Jats was heavy, the survivors were only one officer and seven men but the enemy company was completely wiped out.