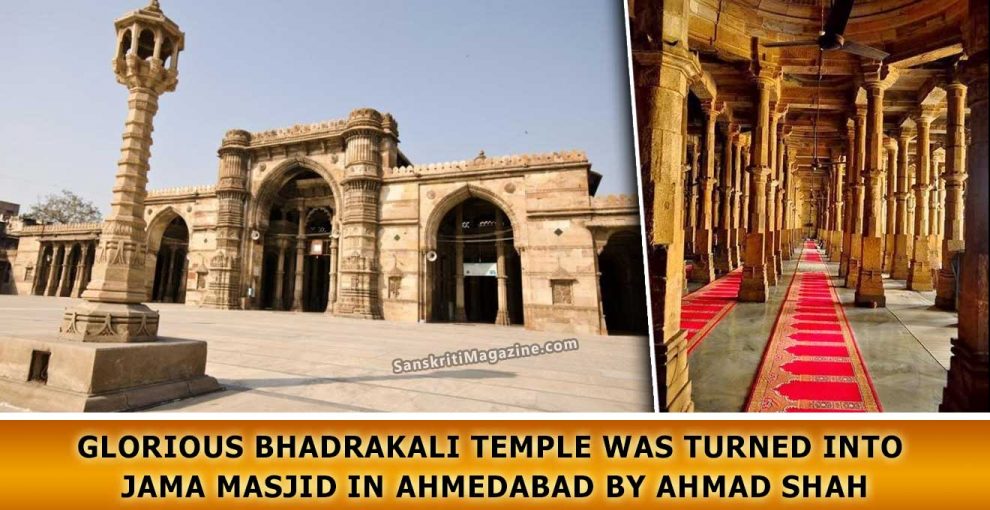 Original name of the city: Bhadra” or “Karnavati, Gujarat
Renamed as a symbol of Islamic atrocities: Ahmedabad, Gujarat

The Jama Masjid is the main mosque in the city of Ahmadabad, Gujarat. It is said to have been built by Ahmad Shah in the year 1452.

The yellow stone monument is said to have been built from the remains of an old Hindu and Jain temple that was desecrated and demolished by the invading Mughal armies. The Mughals would plunder, desecrate, loot and destroy ancient temples and converted them into mosques, mausoleums, and tombs.

Jama Masjid was once an ancient Hindu temple belonging to the Rajput Parmar kings of Malwa. The temple was built in honor of Goddess Bhadrakali, the chief and patron deity of the Rajputgharana (royal house) of Parmar rulers.

Archeological findings, ancient literature and folk songs which are passed on to this day, from around Gujarat and as far as Madhya Pradesh sing the glories of the brave Rajput warriors who ruled the lands of Kutch, Mewar and Malwa.

They ruled between the 9th and 14th centuries and built many temples and palaces around the regions of current day Rajasthan, Gujarat, and Madhya Pradesh. Ballads written in the honour of the brave warrior clan who worshipped Bhadrakali and were renowned for their valour, swordsmanship, and victories, are sung to this very day by the surviving locals tribes of the region.

Ahmadabad during the rule of the Rajput kings was called “Bhadra” or “Karnavati.” It was named in honour of the patron goddess of the Parmar clan, Bhadrakali aka Karnavati. It was Ahmad Shah who renamed the city after himself after capturing it from the hands of the Hindu Rajput rulers. 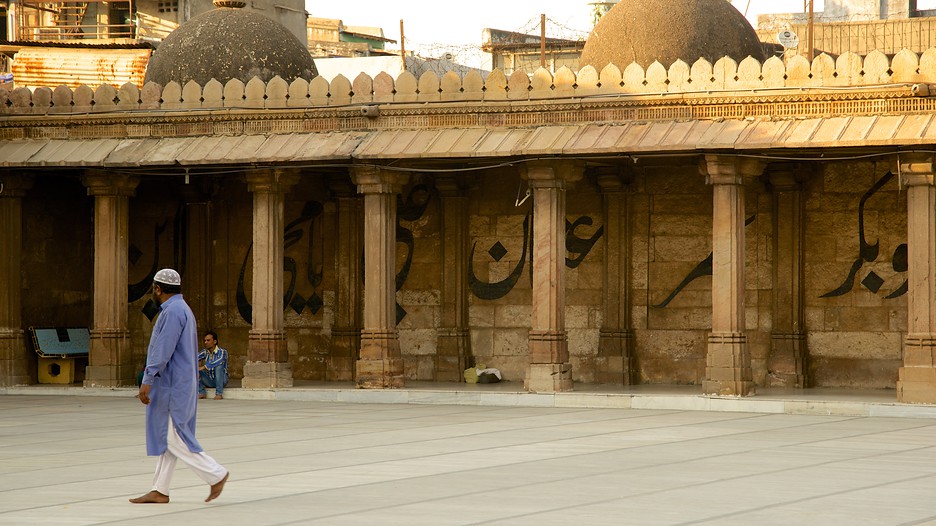 The Bhadrakali Temple, which is now the Jama Masjid, was once a rich palace and remains an architectural masterpiece. It reminds us of a bygone era of the old Rajputana style of architecture.

The filigree carvings of flower and Paisley motifs, lotus flowers and creepers, mandalas, elephants, coiled serpents representing the kundalini, celestial dancers and bells are found carved on the 100 odd surviving pillars that line the temple complex.

If Jama Masjid was indeed a mosque, it is interesting to note that in Islam it is stricter forbidden and punishable under Sharia law to worship or give a physical representation or the form of an idol, figure, figurine, animal, etc. to God. The religious preaches that there is only one God and idol worship is the biggest sin.

So how come this Moghul Mosque has such elaborate filigree carvings on the pillars and domes?

Why were pillars constructed in a mosque, which is chiefly a prayer hall or large space of worship meant to allow room for a large congregation?

Wouldn’t the pillars cause an obstruction while offering Namaz? 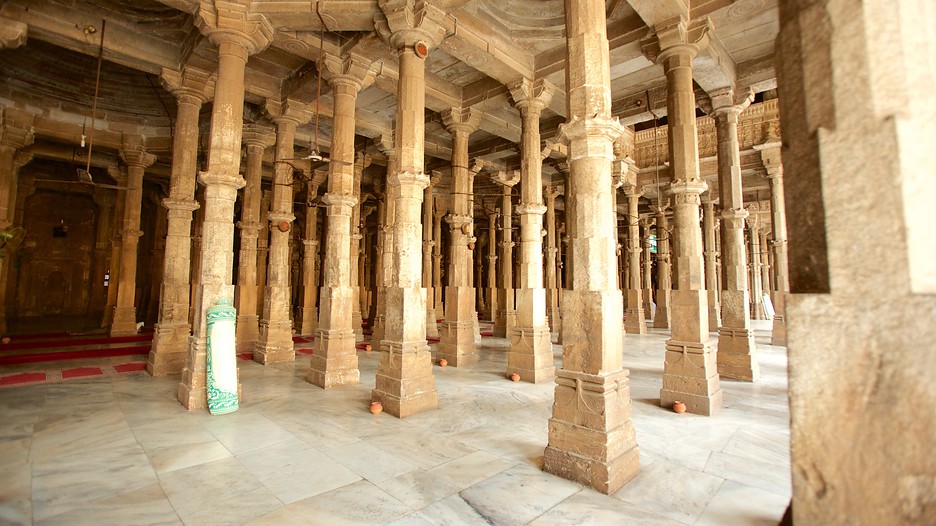 The temple pillars are usually ornately carved with stories from the Puranas, Vedas, and Itihasas, like Ramayana and Mahabharata. The Shiva Purana tells in great detail the story and appearance of the fierce Bhadrakali during the great Yaga conducted by Prajapati Daksh. The Rajput rulers are ardent devotees of goddess Bhadrakali and consider themselves to be Her slaves and guardian-warriors of the land. 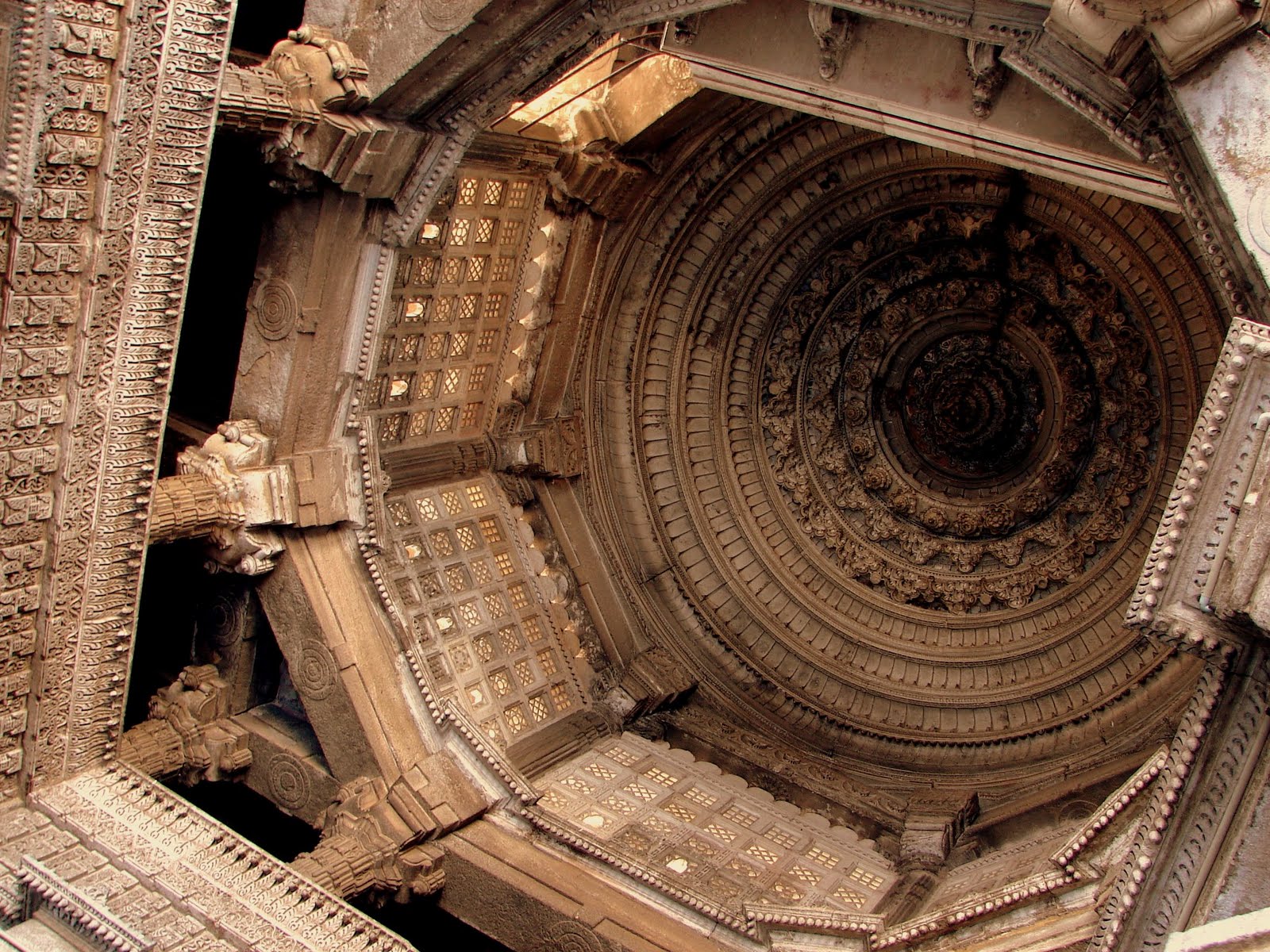 There is no wonder that such a beautiful and detailed temple was built in honour of goddess by the warrior kings of Gujarat.

Kings and 8 Ministries of Vedic Period

Did Hitler and Nazi Germany found the treasure trove of ancient knowledge in India and Tibet
Ghosts of 1962: Leaked military report blames Nehru and an ill-prepared army for defeat by China
Comment