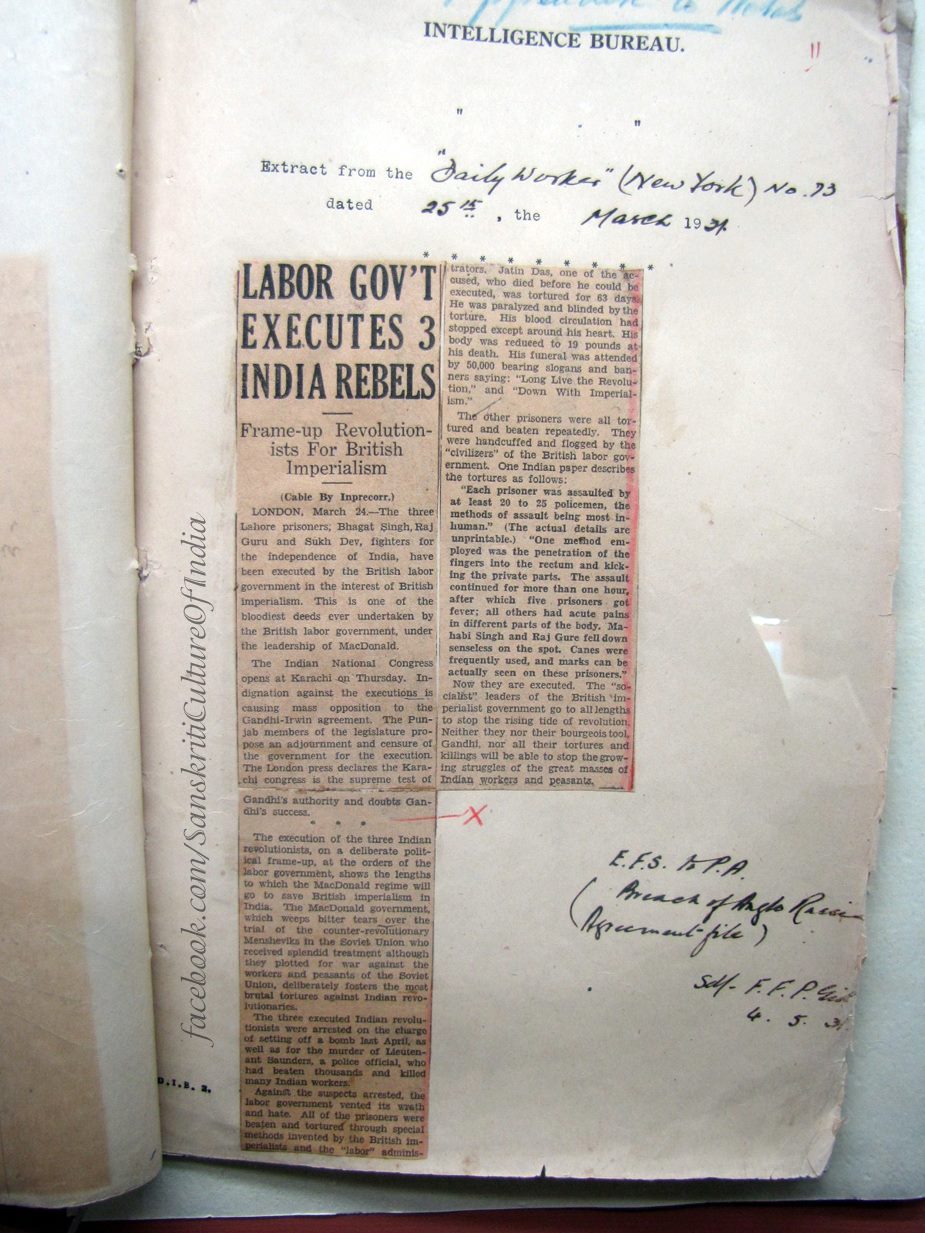 Execution and Torture of Bhagat Singh, Raj Guru, Sukhdev and Jatin Das as observed by the WEST!

LONDON, March 24. – The Three Lahore prisoners, Bhagat Singh, Raj Guru and Sukh Dev, fighters for the independence of India, have been executed by the British Labor government in the interest of British imperialism. This is one of the bloodiest deeds ever undertaken by the British labor government, under the leadership of MacDonald.

The Indian National Congress opens at Karachi on Thursday. Indignation against the executions is causing mass opposition to the Gandhi-Irwin agreement. The Punjab members of the legislature propose an adjournment and censure of the government for the execution. The London press declares the Karachi congress is the supreme test of Gandhi’s authority and doubts Gandhi’s success.

The execution of the three Indian revolutionists, on a deliberate political frame-up, at the orders of the labor government, shows the lengths to which the MacDonald regime will go to save British imperialism in India. The MacDonald government, which weeps bitter tears over the trial of the counter-revolutionary Mensheviks in th Soviet Union who received splendid treatment although they plotted for war against the workers and peasants of the Soviet Union, deliberately fosters the most brutal tortures against Indian revolutionaries.

The three executed Indian revolutionists were arrested on the charge of setting off a bomb last April, as well as for the murder of Lieutenant Saunders, a police official, who had beaten thousands and killed many Indian workers.

Against the suspects arrested, the labor government vented by the British imperialists and the “labour” administrators. Jatin Das, one of the accused, who died before he could be executed, was tortured for 63 days. He was paralyzed and blinded by the torture. His blood circulation had stopped except around his heart. His body was reduced to 19 pounds at his death. His funeral was attended by 50,000 bearing slogans and banners saying: ” Long Live the Revolutions,” and “Down With Imperialism.”

The other prisoners were tall tortured and beaten repeatedly. They were handcuffed and flogged by the “civilizers” of the British labor government. One Indian paper describes the tortures as follows:
“Each prisoner was assaulted by at least 20 to 25 policemen, the methods of assault being most inhuman.” (The actual details are unprintable.) “One method employed was the penetration of the fingers into the rectum and kicking the private parts. The assault continued for more than one hour, after which five prisoners got fever; all others had acute pains in different parts of the body. Mahabi Singh and Raj Guru fell down senseless on the spot. Canes were frequently used, and marks can be actually seen on these prisoners.”

Now they are executed. The “socialist” leaders of the British imperialist government go to all lengths to stop the rising tide of revolution. Neither they nor their tortures and killings will be able to stop the growing struggles of the great masses of Indian workers and peasants.