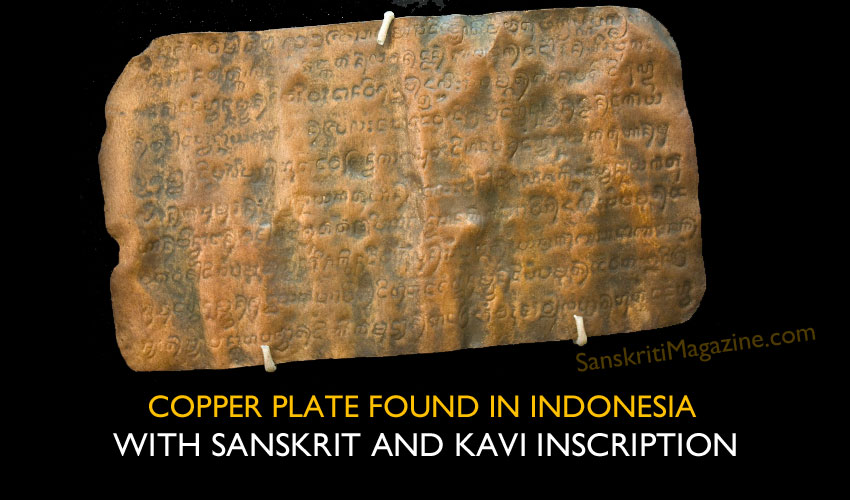 Very little of what we know about the Philippines before the Spanish invasion came from written records. Aside from some documents in China that refer to the islands, there have only been a few artefacts found in the Philippines that actually have writing on them.

There was a clay pot found in Calatagan, Batangas, a small strip of silver and an ivory seal, both found in Butuan, Agusan del Norte, but until now, the writing on these objects has not been reliably deciphered. There have also been several forged documents over the years that have been exposed as fakes. And even though Filipinos were writing with their own baybayin script when the Spaniards arrived, no baybayin documents have survived from before the Spanish era.

So, until recently, we have never had the chance to read the actual words and thoughts of an ancient Filipino without the obscuring effects of foreign interpretations, centuries of unreliable hearsay and even outright lies and fabrications. That is, until a document was found in 1989 that was written in a much older and more complex writing system than the baybayin.

On that day in 1989, a man in the concrete business was dredging sand at the mouth of the Lumbang River near Laguna de Ba’y when he uncovered a blackened roll of metal. Usually he would just throw away such junk, as it tended to get jammed in his equipment, but when he unfurled the roll he saw that it was a sheet of copper with strange writing on it, about the size of a magazine.

He offered the copper sheet to one of the antiques dealers in the area who bought it for next to nothing. The dealer, in turn, tried to sell it for a profit but when he found no buyers, he eventually sold it to the Philippine National Museum for just 2000 pesos.

In 1990, Antoon Postma, a Dutch expert in ancient Philippine scripts and Mangyan writing, and a long-time resident of the Philippines, translated the document that came to be known as the Laguna Copperplate Inscription (LCI). When he saw that the writing looked similar to the ancient Indonesian script called Kavi, and that the document bore a date from the ancient Sanskrit calendar, he enlisted the help of fellow Dutchman, Dr. Johann de Casparis, whose area of expertise was ancient Indonesia.

Casparis confirmed that the script and the words used in the Laguna document were exactly the same as those that were used on the island Java at the time stated in the document, which was the year 822, in the old Hindu calendar or the year 900 C.E. (Common Era) on our calendar.

In 1996, a Filipino history buff in California, Hector Santos, precisely converted the Sanskrit date over to our calendar by using astronomical software and some historical detective work. He determined that the Sanskrit date written on the plate was exactly Monday, April 21, 900 C.E.

In spite of the similarities to Javanese documents, the copper plate had some peculiarities that led scholars to believe that it was not from the island of Java. First: the LCI did not mention the king of Java at that time, King Balitung. It was the custom at that time to always mention the name of the king in official documents. Second: the language used in the document was not only Sanskrit. It was a mixture of Sanskrit, Old Javanese, Old Malay and Old Tagalog. And third: the method of writing was different. At that time in Java the characters were impressed into heated copper, but the characters on the Laguna plate seemed to have been hammered into cold copper.

In his examination, Postma learned that the inscription was a pardon from the Chief of Tondo that erased the debt of a man named Namwaran. His debt was one kati and eight suwarna, or about 926.4 grams of gold. Today in 2006, this is equal to about $18,600 Canadian.

The document mentioned a few towns that still exist today: Tundun, which is now Tondo in Metro Manila and three towns in Bulakan; Pailah or Paila, Puliran or Pulilan, and Binwangan. A town in Agusan del Norte on Mindanao called Dewata or Diwata also appears in the text. Diwata is near Butuan, which has been a rich source of ancient artefacts. A place called Medang was mentioned, too, which is possibly Medan in Sumatra, Indonesia. Also, the name of Namwaran’s son was given as Bukah, a name that may have some relation to the town of Gatbuka in Bulakan. Gat is a title similar to “Sir” for a knight.

As is often the case, though, this discovery has raised more questions than answers.

It is only one document but it seems to have revealed a widespread culture with Hindu influences in the Philippines before the arrival of the Spaniards and even before the Muslims. Did ordinary Filipinos share this culture or were the people mentioned in the document just members of a small ruling class of foreigners? Was their culture pushed out of the islands when the Muslims arrived in the 12th or 13th century?

Did Filipinos once speak Sanskrit or was it reserved for important documents written by an elite minority? There are certainly some Sanskrit influences in Philippine languages but nobody was speaking it by the time the Spaniards arrived.

And what happened to this Kavi style of writing? It was a far more advanced and accurate way to write than the baybayin script that Filipinos were using 500 years later. Perhaps only that elite minority used it and so it disappeared with them.

Whatever the answers, it hints at some exciting discoveries to come in the future.

The LCI in English

In 1994 Hector Santos asked me to write a Filipino translation of the Laguna Copperplate Inscription. I wrote two. The first was based on his English translation. The second was based on his glossary, called the LCI Dictionary, and on my own research. It closely followed the word order of the original document. My latest translation (which can be seen in the Filipino version this article) changed the sentence structure to make it more readable. Here is my rough English translation of that Filipino version. 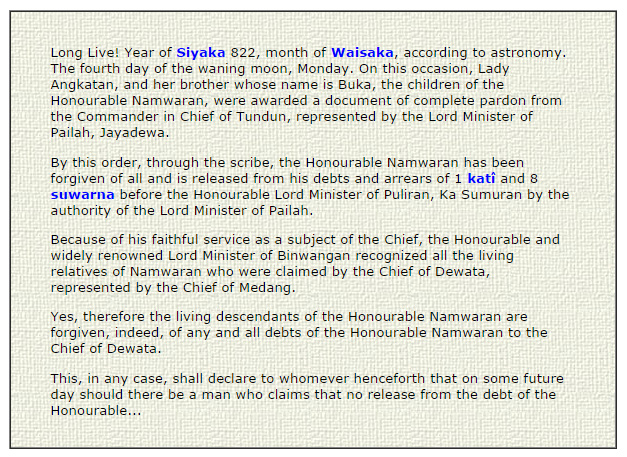