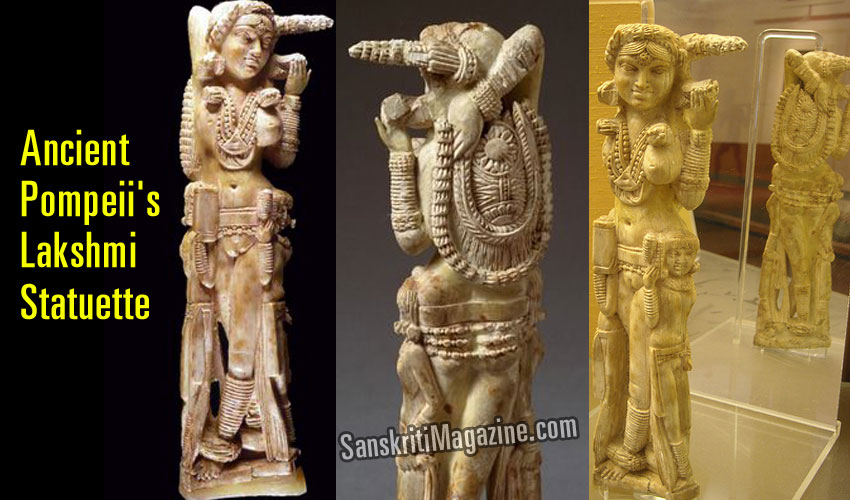 In 1939, Italian archeologist Prof Maiuri, discovered an artifact in the ruins of ancient Pompeii, that had a very Indian origin. This ivory statuette which survived the disaster and lasted all these 2000 years was identified by Prof Maiuri as that of the Goddess Lakshmi and dated to around 1AD. It has since then been quoted as the ‘Goddess Lakshmi statue in Pompeii’ in many books & articles. This small, rare sculpture, found in a modest dwelling in Pompeii, represents nonetheless an important indication of the trade relations that existed already by the 1st century A.D. between the Western Mediterranean countries and the East by means of the port of Puteoli, known today as Pozzuoli: created in Augustan times, the port received from every known destination spices, slaves, wine, grain, ceramics and precious objects destined for sale on the Roman market.

The statue portrays Lakshmi, Indian divinity of feminine beauty and fertility. Naked, with two handmaidens at her sides bearing toiletries, her body is adorned with heavy jewels: a diadem on her forehead, a necklace on her chest and large and numerous rings on her ankles and wrists. Her long hair, also richly embellished, flows over her shoulders down to her waist. She is probably one of the apophoreta, ‘gifts to be carried away’, as Martial recalls in his Epigrams, a sort of prize for winning the dice games which took place during the numerous banquets, consisting of silver, bronze or ivory statuettes. A round hole above the head suggests, however, that the statuette served the purpose of a handle, probably for a toiletry object, or that it was a support for some kind of furnishing.

This small, rare sculpture, found in a modest dwelling in Pompeii, represents nonetheless an important indication of the trade relations that existed already by the 1st century A.D. between the Western Mediterranean countries and the East by means of the port of Puteoli, known today as Pozzuoli: created in Augustan times, the port received from every known destination spices, slaves, wine, grain, ceramics and precious objects destined for sale on the Roman market.

Discovered in Pompeii, Casa della Statuetta indiana; in a wooden chest situated on the western side of the Viridarium .

Rome played an important part in the Eastern oriental trade of antiquity. The Romans imported many goods from India and at the same time set up their own trading stations in the country. A particularly famous one was at Arikamedu (near modern Pondicherry), where Roman coins, amphoras and roman glass have been found. Trading in commodities from Southern India was very much to Rome’s advantage, and it is no accident that large quantities of Roman coins have been found in that part of India.

According to Butterworth & Laurence in their book ‘Pompeii’ (Pgs 54, 55), the statuette reached Pompeii around 40AD through a caravan of traders via the overland route. This was actually the leg of an ivory tripod table. The authors note the uncanny resemblance of the poses of the two acolytes to Venus, the Greek goddess. The statuette was found in the house of four architectural styles. It was a period when antibiotics from China and religions like Hinduism & Buddhism from India etc reached Greece & Rome and multicultural Naples (Ghosts of Vesuvius -Charles R. Pellegrino (Pg 158. 159)). Two identical statues has been found at Ter (Tagara) Bokhardan (Bhogavardhana) in India, testifying the statue’s origins, however the fact that it is goddess Lakshmi is hotly disputed. The book ‘State intervention and popular response’ – By Mariam Dossal, Ruby Maloni (Pg 46) gives further information that this statue originally thought to have been made by ivory carvers (dantakara) in Mathura actually came from Bhokardan. In “The making of Roman India” Grant Parker thinks it might have been the leg of a small piece of furniture and disputes it being a representation of Lakshmi.

Moeller (The wool trade of ancient Pompeii Walter O. Moeller Pg 76) feels that there existed a trade of dyestuff between Indian and Pompeii based on the fact that the building next door to the one that housed the statuette was a dye house. So he feels that the statue perhaps came together with a shipment of Indigo dyes.

So how did the statue find its way to Pompeii? Did they go with Indigo dyes from the south or via overland caravan trade? Most likely it went with spice ships that plied the Malabar & red sea coast, then overland to Alexandria and again by sea to Naples. Puteouli (Puzzuoli) near Naples had a major warehouse constructed by Domitian as early as 78AD to stock Indian spices. So the spice trade was in full swing at that time or even before that.

At first look it did not look like a goddess statue to me. The statue itself bears little resemblance to the Goddess statues of India. Also I felt that a goddess statue would not be passed around as a toiletry object or become a part of table legs. Looking at the hair and ornament styles, they somehow do not seem very Indian to me, mainly the hair style behind the neck. The bangles in the arms and feet look African or Rajastani Banjara type to me, and unlike a high class figurine. The figure is also less buxom compared to usual Indian statues. So was it an ivory table ‘made to order’? Was it perhaps a Yavana sculpture from Arikamedu or Pondicherry in Tamil Nadu? Could very well be and we will never know for sure, its origins.

Amazing! This little statue survived the intense heat of the lava, the disaster and is now a testament to the trade relations between the ancient Greece, Rome & India dating back over 2000 years.