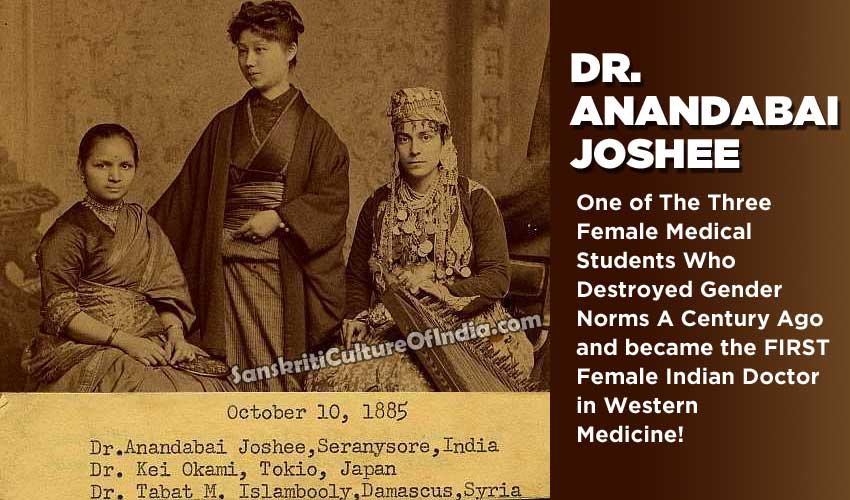 Every so often, the same mysterious image seems to pop up on the internet. The black-and-white portrait looks to be at least a hundred years old, and yet, it is of an Indian woman, a Japanese woman and a Syrian woman, sitting in Pennsylvania.

The photograph — doing rounds this time thanks to Jaipreet Virdi-Dhesi, a Ph.D. student who posted the photograph on her blog after stumbling on it while researching 19th century ear surgery — is remarkable enough to warrant the fuss. The three magnificently dressed ladies were students at the Women’s Medical College of Pennsylvania, snapped at a Dean’s reception, in 1885.

In fact, she lived a mere 21 years but achieved so much in that brief span that a crater on Venus is now named in her honour. The 34.3 km-diameter crater on Venus named ‘Joshee’ lies at latitude 5.5° N and longitude 288.8° E. Here is astronmy enthusiast Sandhya Ramesh’s tweet that gives links to the Venus story.

If the timing doesn’t seem quite right, that’s understandable. In 1885, women in the U.S. still couldn’t vote, nor were they encouraged to learn very much. Popular wisdom decreed that studying was a threat to motherhood. Women who went to college, wrote the Harvard gynecologist Edward H. Clarke in 1873, risked “neuralgia, uterine disease, hysteria, and other derangements of the nervous system,” such as infertility. “Because,” went Clarke’s reasoning, in a classic bit of mansplaining titled “Sex In Education,” a woman’s “system never does two things well at the same time.”

So how did our seemingly non-hysterical trio wind up inside a medical school? And that too, from thousands of miles away?

In a report last year for PRI’s The World — which seems to go viral annually — Christopher Woolf credits unsung heroes for making the situation possible: the Quakers, “who believed in women’s rights enough to set up the WMCP way back in 1850 in Germantown.”

The first women’s medical college in the world, the WMCP was a magnet for ambitious ladies of all stripes. The three in the photograph — from left to right, Anandibai Joshi, Keiko Okami, and Sabat Islambouli — eventually became the first licensed female doctors in their respective countries: India, Japan and Syria.

Joshi is the best known of the three, perhaps because of how popular the medical profession is among Indians and Indian Americans. In India, Joshi’s life story became the basis for a 1992 novel and subsequent award-winning play (and was nearly turned into a movie). In America, the feminist Caroline Healey Dall wrote a biography of the young doctor as early as 1888, full of praise for Joshi’s “high-born consciousness.”

You can understand the fascination. On paper, Joshi’s life seems hugely regressive, but in reality it was anything but. She was married off at the age of nine, to a 20-year-old man. Unusually, he believed fervently that she should be educated, and took her lessons on himself.

According to Woolf’s report, what impelled Joshi to pursue medicine was the death of her 10-day old baby, a tragedy that struck when she was herself only 14. As she learned, and as Woolf points out, “medical care for women — even high-caste women like Joshi — was simply unavailable.” 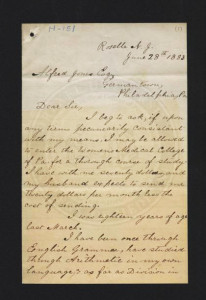 She was well-read, thanks in part to her husband, but not wealthy enough to go to medical school. The Oxford Encyclopedia of Women in World History details the circuitous route the couple took to find a backer to send Joshi to America. Fittingly, it was a woman who stepped in: Theodicia Carpenter, a wealthy New Jerseyite who read of the couple in a local Christian paper, after they turned down an offer from an American missionary who promised funds only if they converted from Hinduism to Christianity.

Woolf details the hardships Joshi faced even after getting licensed. According to a Drexel archivist he spoke with, India’s first female physician died of tuberculosis at 21, too young to ever practice. As for the other two women in the internet’s favorite 19th century graduation picture, life wasn’t simple going: Islambouli fell off the university’s radar after moving home, an indication that she likely dropped her career. Okami went on to become head of gynecology at a top Tokyo hospital, only to resign when the reigning emperor refused to meet her during a visit to the hospital, because she was a woman.

She studied at the Women’s Medical College of Pennsylvania (WMCP), which is now called Drexel University College of Medicine. She was granted a scholarship of $ 600/- for three years. Her dissertation was on “Obstetrics among the Hindu Aryans.” Thus Anandi became the first woman of Indian origin to study and graduate with a degree in medicine from the United States.

But her health was still on the downside. She had contracted tuberculosis which was incurable then unless her immunity somehow beat it back into remission. Anandi soldiered on. The strain of adjusting to a different culture, not enough monetary resources, studying long hours and other pressures began telling on her health. She developed a persistent cough. She graduated on 11th March 1886. Her husband Gopalrao and a renowned scholar and woman social reformer Pandita Ramabai, both arrived in America especially for the function and attended Anandi’s graduation. Even Queen Victoria sent her a congratulatory message. The Philadelphia Post wrote, “Little Mrs. Joshee who graduated with high honours in her class, received quite an ovation.” Soon after, a visibly sick Anandi (accompanied by Gopalrao) boarded the ship for India.

Anandi came back to Bombay (Mumbai) to a champion’s welcome. Barely had she settled down to life back at home that tuberculosis claimed and the 21-year-old died on 26 February 1887. See the tragedy. India’s first woman doctor did not even have a chance to practice in her country. Her ashes were later sent to Mrs Carpenter who had them interred in her family cemetery at the Poughkeepsie Rural Cemetery by the Hudson in New York, in Lot 216-A.

The WMCP graduates are the ones we remember though, and for good reason: in a few years, women doctors will outnumber men around the world.

Kings and 8 Ministries of Vedic Period

The Forgotten 54: India’s lost soldiers from the Indo-Pak war of 1971