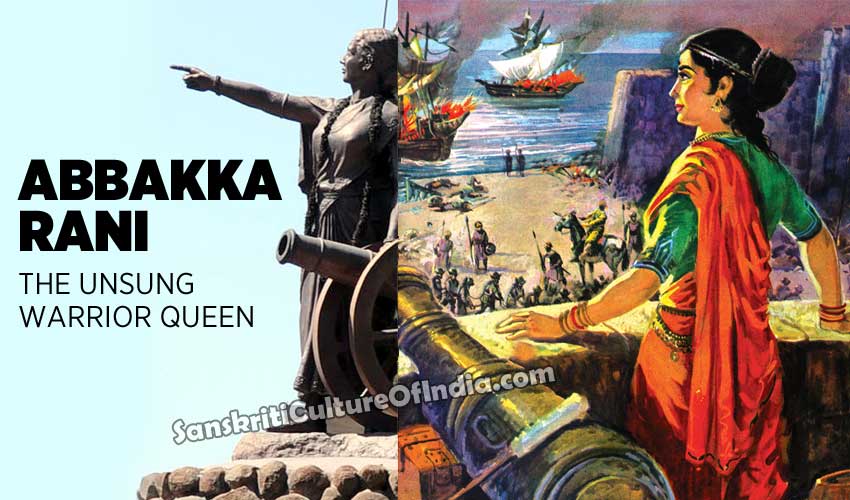 “Abbakka rode the horse stately and worked deep into the night dispensing justice. She is the last known person to have Agnivana (fire arrow).”

The Arabian Sea water that splashes the shores of Ullal near Mangalore in Karnataka could tell you the story of Abbakka Rani, locally known as Abbakka Mahadevi. Such is her personality in the region that she has become a folk legend. Abbakka Rani is one of the earliest freedom fighters of India who resisted the Portuguese.

The regions where Abbakka was queen is known as Tulunadu.  Rani Abbakka, though a Queen of a little known small princely state, Ullal, was magnetic woman of indomitable courage and patriotism. While Rani Jhansi has become a symbol of courage, Abbakka, nearly 300 years her predecessor, has been largely forgotten by history. Her furious wars with Portuguese are not well recorded. But whatever is available speaks of a luminous personality of awesome valour and bravery.

Sources, such as archival records, travelogues of several Portuguese travelers and historical analysis confirm that there were three Abbakkas: mother and two daughters, who fought against the Portuguese Army between 1530 and 1599.

Though it is the second daughter who was the most courageous, the folklore treats all three Abbakkas as one great Queen and a brilliant personality Abbakka Mahadevi or Rani Abbakka. In this article also she is being treated as a single character – Abbakka Rani.

Ullal fort, the capital of Abbakka’s kingdom, is located just a few kilometers away from the city of Mangalore, on the shores of the Arabian Sea. It is a historical as well as a pilgrim spot because of the beautiful Shiva Temple built by the Queen and a unique natural rock, called the Rudra Rock. The rock appears to change colours every second, as the water splashes on it.

According to local legends. Abbakka was an extraordinary child and as she grew up showed signs of being a visionary. there was no equal to her in military science and warfare, mainly in archery and sword fighting. Her father encouraged her in this and after she was well versed in all areas, she was married to a neighbouring local king of Bangher. The marriage did no last long with Abbakka breaking the ties by returning the jewels given by him to her. The husband thus nurtured revenge against Abbakka and later on joined the Portuguese in a treaty, to fight Abbakka.

The Portuguese had made several attempts to capture Ullal, strategically placed. But Abbakka had repulsed each of their attack with sheer courage and ingenuity. The queen’s story is retold from generation to generation through folk songs and yakshagana, the popular folk theatre. In bootaradhana, (which literally means appeasing the possessed, a local ritual dance) the personal in trance narrates the great deeds of Abbakka Mahadevi. Abbakka, dark and good looking, always dressed in simple clothes like a common village woman. She rode the horse stately and worked deep into the night dispensing justice.

According to the folklore, Abbakka is the last known person to have the Agnivana (fire-arrow) in her fight against the Portuguese. Though Abbakka was a Jain by faith her administration was well represented by Hindus and Muslims. Her army too consisted of people from all sects and caste including Moggaveeras, a fisher folk community. The first attack by the Portuguese in south Kanara coast was in 1525, when they destroyed the Mangalore port. Rani Abbakka was alerted by the incident and started preparing herself to protect her kingdom. In 1555, the Portuguese sent Admiral Don Alvaro da Silvereira against the Queen of Ullal Abbakka Devi Chowta who had refused to pay them the tribute. She fought with courage and intelligence and pushed them back.

In 1558 the Portuguese Army perpetrated another wanton cruelty on Mangalore, putting to death a number of men and women, both young and old, plundering a temple, burning ships and finally setting the city itself on fire.

The same year one general Joao Peixoto was sent by the Portuguese Viceroy Antony Norohna with a fleet of soldiers. He captured the city of Ullal and also entered the royal court. However the Queen escaped and took asylum in a mosque. The same night, she counter-attacked the Portuguese army, with a help of 200 of her soldiers and killed General Peixoto and 70 Portuguese soldiers.

The invaders were forced to flee to their ships in disgrace. The Portuguese soldiers who remained in Ullal were dead drunk with overconfidence and were dancing. Taking advantage of this opportunity, about 500 Muslim supporters of Abbakka Rani attacked the Portuguese and killed Admiral Mascarenhas along with the help six thousand Muslim soldiers in 1568, and the foreign army had to leave the Mangalore fort.

In 1569, the Portuguese Army not only regained the Mangalore Fort but also captured Kundapur (Basrur). Abbakka Rani was a source of threat to the Portuguese. They won the confidence of Abbakka’s estranged husband, king of Bangher and started attacking Ulla. Abbakka Rani fought vigorously.

She formed an alliance in 1570 with Bijapur Sultan Ahmed Nagar and the Zanmorine of Calicut, who where also opposing the Portuguese. Kutty Pokar Markar, a general of the Zamorine fought on behalf of Abbakka and destroyed the Portuguese fort at Mangalore but while returning he was killed by the Portuguese.

Abbakka lost the war as her husband assisted the Portuguese by revealing to them her strategies of warfare, which he was familiar with. She was arrested and jailed. However, the warrior that she was, she revolted in the prison and died as a soldier – fighting.

Though Abbakka has been admired and worshipped in the local folk forms, it is very recently there there have been efforts to honour her memory.

As a result of these efforts the Karnatka Government has erected a statue of the Queen in the city of Bangalore. IGNCA is making a documentary on Abbakka Rani, incorporating the folk myth.