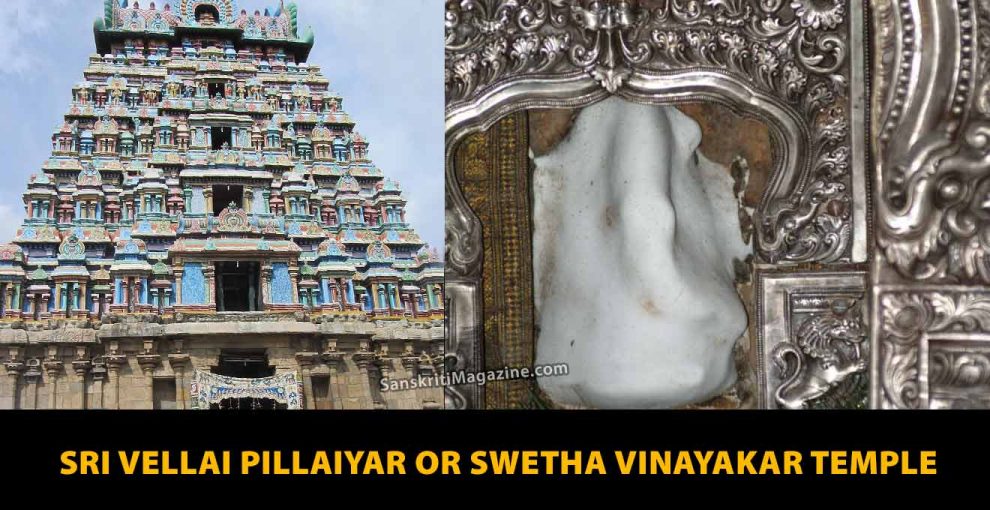 Swetha Vinayakar, a white coloured deity of Ganesha is worshipped here. Though this is a temple for Lord Shiva, Swetha Vinayakar is the important deity of Thiruvalanchuzhi.

Legend has it that the Devas, forgot to worship Lord Ganesha before starting to churn the “Milk Ocean” (Ksheera Saagaram). Hence, they were only able to get the Alakala Poison out of it.

Later Indra, the king of Devas realised that, it was because they did not worship Ganesha before starting their mission.

Lord Indra created this deity out of the foam (Kadal Nurai) that was generated from the milky ocean (Ksheera Saagaram) churned by them, in their quest for the celestial nectar Amrudham.

After they worshipped this deity made of foam (Nurai in Tamil), they were able to take out the Amrudham from the Ocean.

As the deity is made of the foam, there is no Abhisheg etc., performed here.

Durvasa Muni is said to have carried out a yajna here, and the Devas who attended it are said to have established several Siva Lingams in this temple.

As the trunk of Lord Ganesha is twisted towards his right hand side, the place is said to have got the name “Thiru Valam Suzhi”.

After this incident, River Kavery came back to the surface near this shrine, and made a complete circle towards the right and hence the village got the name Thiruvalanchuzhi.

There are several interesting sculptural features in this vast temple. Inscriptions reveal that Raja Raja Cholan had made several endowments here. There are also inscriptions from the period of Parantaka Chola I.

There are lots of quotes in the history about the sculptures of this temple. There is a huge window like structure carved out of a single stone which is facing Lord Ganesha. It is said that we also have to get the Dharshan of Lord Ganesha through this window.

It is said that the ancient sculptors, when they approach the Kings to demonstrate their skills and to get an opportunity to work for the kings, they used to tell the king that except the window of Thiruvalanchuzhi temple, they can do any kind of sculpture.

Located enroute to Swamimalai from Kumbakonam, Lord Ganesha is a feast to watch at Thiruvalanchuzhi.