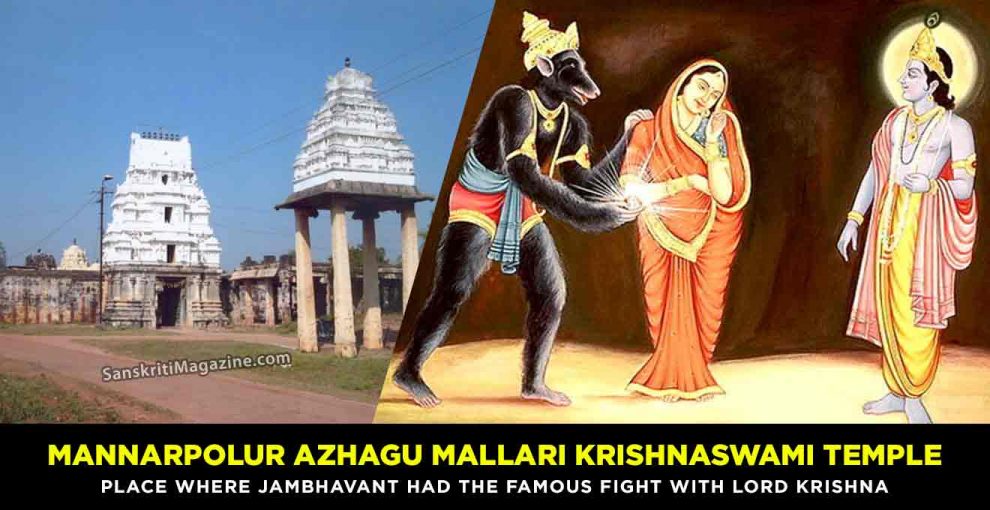 Place where Jambhavant had the famous fight with Lord Krishna

Mannarpolur is a small village on the banks of ‘Kalindi’ river near Sullurpeta in Nellore District of Andhra Pradesh. There is a very ancient temple in this village, which is almost a sleepy little village. Once upon a time, this must have been an important village, certainly far more important than Sullurpeta which must have been of a fairly recent origin. The basis for saying that Mannarpolur must have been an important village is the fact that this temple is believed to date back to the 10th century and is the only important temple in a radius of about 40 kms. There is no other important temple apart from this temple until Srikalahasti in Chittor District or till Nellore.

It is reasonable to presume that this must have been a central place for many pilgrims proceeding in different directions. Another reason for believing that this must have been an important temple, apart from the mythological stories behind this temple to which we will be reverting shortly, is the fact that this temple has many shrines and sub-shrines, apart from having a fairly spacious temple tank. It is believed that this temple was constructed by the Cholas in or around the 10th century and was improved upon by the ‘Manuma Siddhi’ rulers of Nellore around the 13th century. Gradually, the temple would appear to have come under the control of the ‘Zamindars’ of Venkatagiri who endowed five villages in favour of the temple in 1800. Local belief is that in the days of old, there were 9 ‘Archakas’ who used to offer worship, every day, nine times in the day. The annual temple festival used to attract pilgrims in large numbers from neighboring villages. Over a period of time, the income of the temple seems to have dwindled, due to various historical and legislative reasons. The properties of the temple would appear to have been either usurped or enjoyed by others. Lands given on lease to tenants are being practically owned by the tenants with little or no income to the temple. The temple tower looks dilapidated with little or no attention having been paid, perhaps ever since it was constructed in the 10th century.

Sathrajit performed a deep penance, offering worship to Surya Devan. Pleased with his penance, Surya Devan presented a jewel ‘Samathakamani’ and also blessed that every day the jewel would give additional quantities of gold. On an occasion, Sathrajit wore the shining jewel and visited Sri Krishna. Sri Krishna also felt that in view of the boon of Surya Deva, it would be better if the jewel were to be with him that be with Sathrajit. Sathrajit, however, refused to part with the jewel. Thinking that a request may again be made by Sri Krishna, Sathrajit presented the jewel to his brother, Prasenajit. 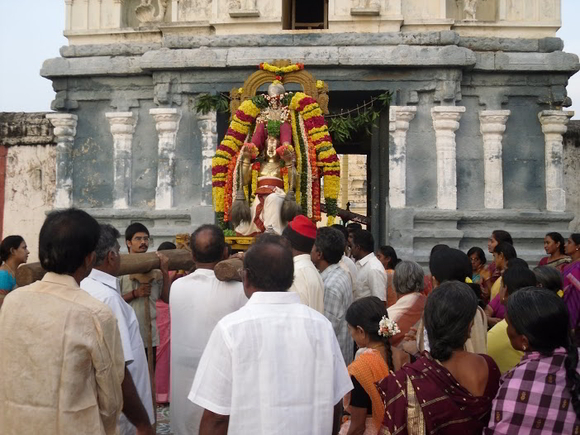 While going for hunting Prasenajit was killed by a lion and it took away the jewel. Later, the lion was attacked and killed by Jambhavan, who presented the Samanthakamani to his daughter Jambhavathi. In the meanwhile, due to the non return of his brother, Sathrajit baselessly presumed that his brother must have been killed by Sri Krishna for the sake of the glittering jewel. Having come to know of this baseless suspicion, Sri Krishna proceeded to the forest to find the jewel. Sri Krishna was able to trace the sequence of events and proceeded to the cave in which Jambhavan was living with his daughter. Thinking that the Lord has come to take away the jewl from him and not realising who Sri Krishna really was, Jambhavan had a glorious fight with Him for about 20 days. After 20 days, Jambhavan realised with whom he was fighting and totally surrendered to the Lord. He offered his daughter Jambhavathis in marriage to Lord Krishna and presented the Samanthakamani to the Lord. It is believed Mannarpolur is the place where the fight have taken place.

Originally, this place was known as ‘Mani Mandapa Kshetram’ as this was the place wherein the ‘mani’ (Samanthaka mani) was presented to the Lord. Since this was the place wherein a hand fight (Malla Yuddham) had taken place with Lord Krishna (Hari), this place was known as ‘Malla Hari Poruru’ (Poru stands for a fight and Uru for place). Over a period of time, ‘Malla Hari Poruru’ got corrupted as Mannarpolur. 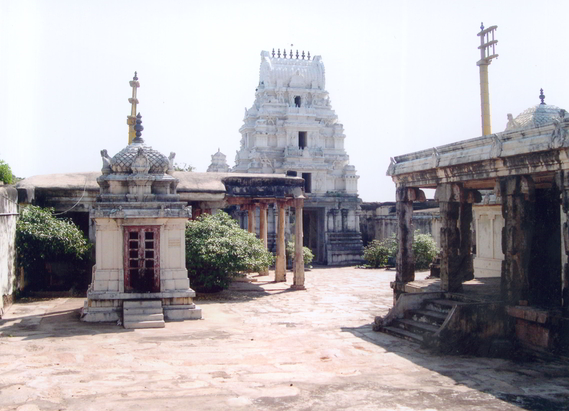 In front of the Dwajsathambam, is a separate shrine for Sri Ramanuja indicating the importance of the shrine for the Sri Vaishnavas. In front of the main shrine, Sugreeva and Jambhavan stand as Dwarapalakas. In front of the main shrine is an unusual idol of Garudazhwar which is unusual in the sense that it is 9 feet height and almost as high as the main moorthi inside the sanctum sanctorum. Garudazhwar was tending to become very proud, stating that it was he who was carrying Lord Vishnu on his shoulders and that there was none who was more powerful than himself. Similarly, the Consort Satyabhama began to feel that there was none more beautiful or more important that She, because She was always by the side of the Lord. Wishing to teach Garudazhwar a lesson, He directed Periya Thiruvadi to go to Himalayas and ask Lord Hanuman to come and visit Lord Krishna.

Lord Hanuman was in-deep panance and being a Sri Rama bhakta, was thinking only of Sri Rama. Garudazhwar first requested and then picked up a fight with Siriya Thiruvadi while persuading Anjaneya to come to the presence of Lord Krishna to Mani Mandapakshetra. When Hanuman vanquished Garudazhwar, the later had to accept his defeat and came to Mani Mandapakshetra to receive further instructions from Lord Krishna. Lord Krishna then deputed Satyabhama as also Garudazhwar asking them to persuade Lord Hanuman to come to the kshetra, so that he could see Sita Devi. At the mere mentions of Her name, Siriya Thiruvadi was only too willing to come. Lord Krishna asked Satyabhama to dress herself as Sita and appear before Lord Hanuman. Lord Hanuman has one look at her and said that she was not his Goddess. Lord Krishna then asked his other Consort Rukmini to appear as Sita. She, in great humility bent and touched the feet of Lord Krishna and then transformed herself into the most beautiful Sita Devi and appeared before Lord Hanuman who was very pleased and went back to the Himalayas. Garudazhwar was taught a lesson and realised that he was not really the greatest or the most powerful. Because he is strong, he is sculpted as a big deity. 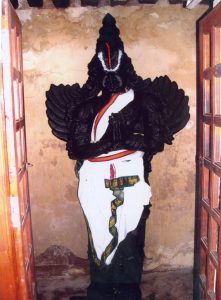 It is however believed Garudazhwar even to this day presents his humility at having been taught the significant lesson. Local people mention that a piece of straw, if even now pressed near the eyes of Garudazhwar comes away wet,as Garudazhwar is shedding tears. Simultaneously, Satyabhama was taught a lesson and therefore the separate shrine is not for Satyabhama, but for Rukmini. Since Rukmini appeared in the most Beatific form, she is known as Soundaravalli Thayar, the most beautiful consort.

There are historical references to the fact that during the period of Manumasiddi this temple was flourishing temple with a lot of pilgrim traffic. In the 16th century, Pydipati Venkata Narasimha Kavi, wrote his two monumental works – Mannaru Krishna Sathakamu and Ramachandra Sathakamu and placed them at the feet of the Lord here. Similarly, Sri Iyalarju Narayana Kavi is believed to have offered to the deity here, his well known work “Hamsa Vimsathi”. In chapter 4, he refers to Mallariswami of Manimantapa Kshetra as Lord Govinda. Similarly in chapter 5, while describing many famous pilgrims centers like Chidambaram, Tiruttani, Kalahsti, he refers to the lovely holy temple at Mannarpolur.

During the last Government, a fund of 1 crore was allocated for renovation which was so far not taken forward and is very much neglected by Govt authorities.

It is time that the renovation of the temple is taken up by the higher authorities of the Endowments Department and the temple is brought back to its pristine glory.

How to reach there?

This village is located 3 km west of a small town called Sullurpeta (mainland for ISRO island Sriharikota, from where rockets are launched)

Sriharikota and sullurpeta are separated by 17 km of Pulikat lake.