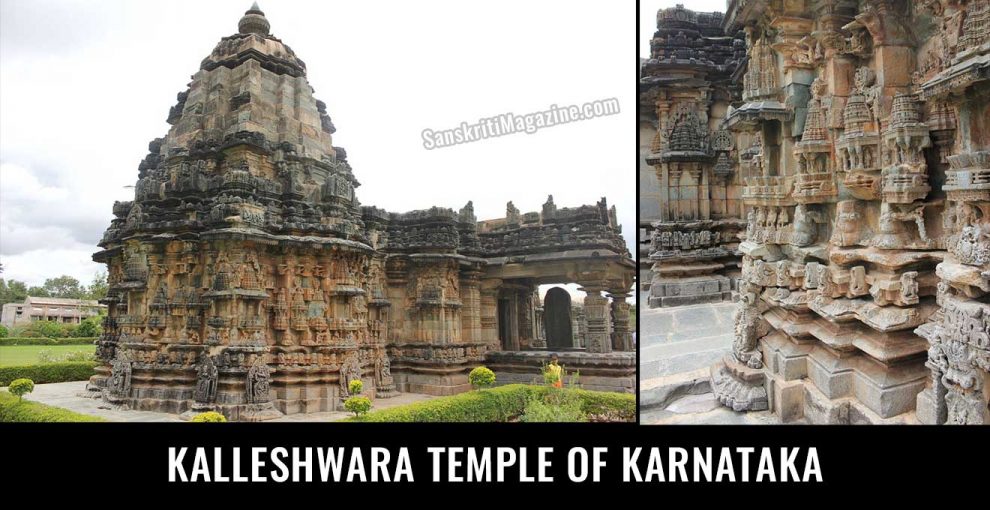 The Kalleshwara temple is located in the town of Hire Hadagali of the Hoovina Hadagali taluk in Bellary district of Karnataka state, India.

The temple was constructed by Demarasa, prime minister (or mahamatya) to Western Chalukya Empire King Someshvara I (who had the honorific Trailokya Malladeva or “Lord of three worlds”), who reigned from 1042–1068 CE. Art historian Adam Hardy refers to the temple as Kattesvara and classifies it as a “close to main stream” Western Chalukya architecture (also called Later or Kalyani Chalukya), with the tower over the shrine being a later day re-construction. The basic material used for the original construction is soapstone. 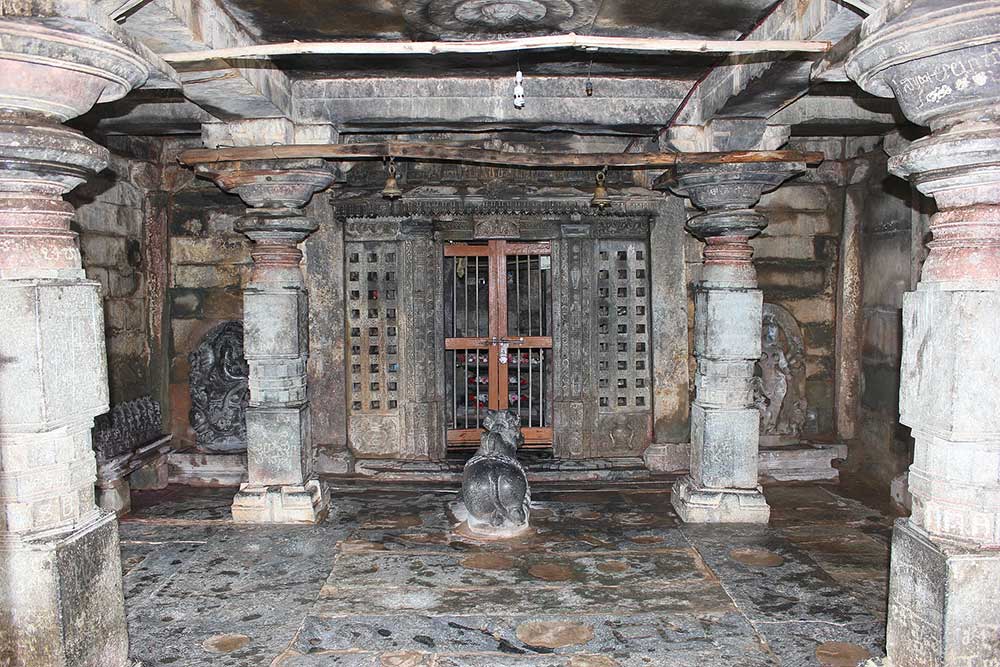 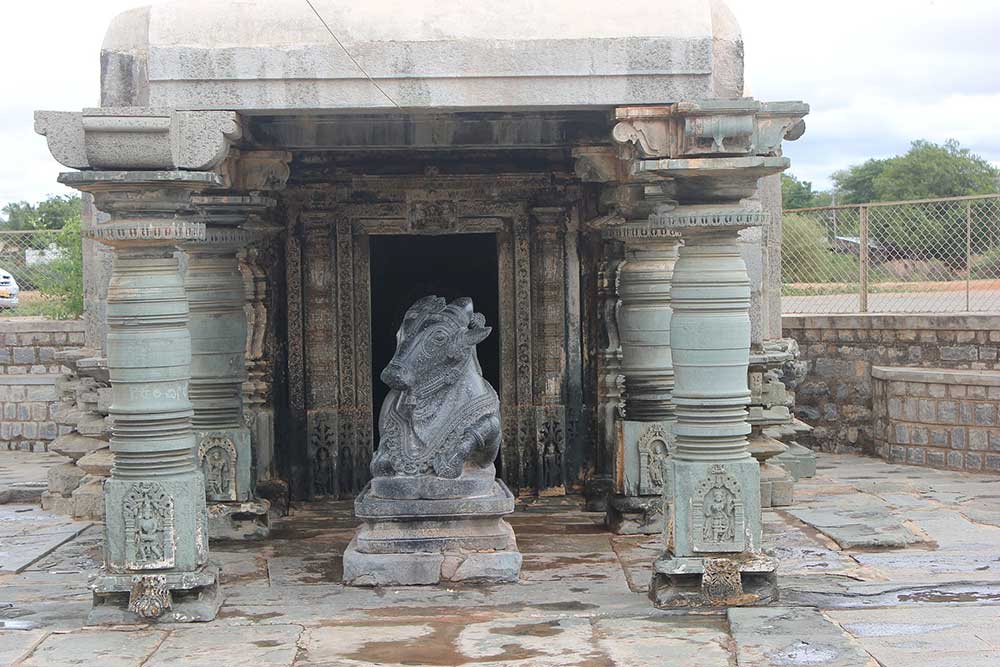 The temple is two shrined (dvikuta, though only one shrine has a superstructure or shikhara), each with a sanctum (garbhagriha) and a vestibule (antarala) that connects to a common four pillared closed hall (navaranga or sabhamantapa, lit meaning “gathering hall”). In the original plan, a large “main hall” (mukhamantapa) existed, connecting the closed hall to the outside of the temple, form the southern direction. Outside the main temple complex, an open hall (called nandimantapa) containing a sculpture of Nandi (the bull, a companion of the god Shiva) has been converted into a shrine. 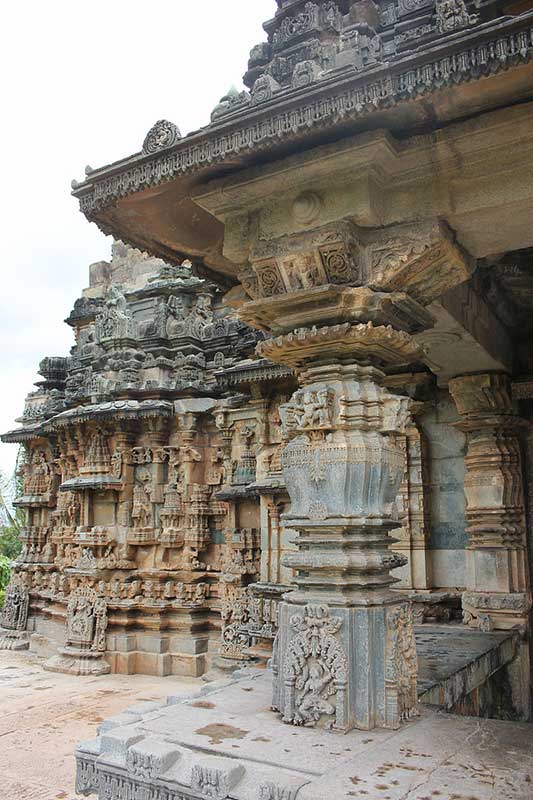 Profile of shrine, and porch with decorative half pillar in Kalleshwara temple, Hire Hadagali

The decorativeness of the outer walls of the main shrine and its closed hall exemplify Chalukyan art. Projections and recesses with niches have been created and used skillfully to accommodate pilasters whose niches contains Hindu deities in relief, depicting the gods Indra, Shiva, his consort Parvati, Lakshmi and others. 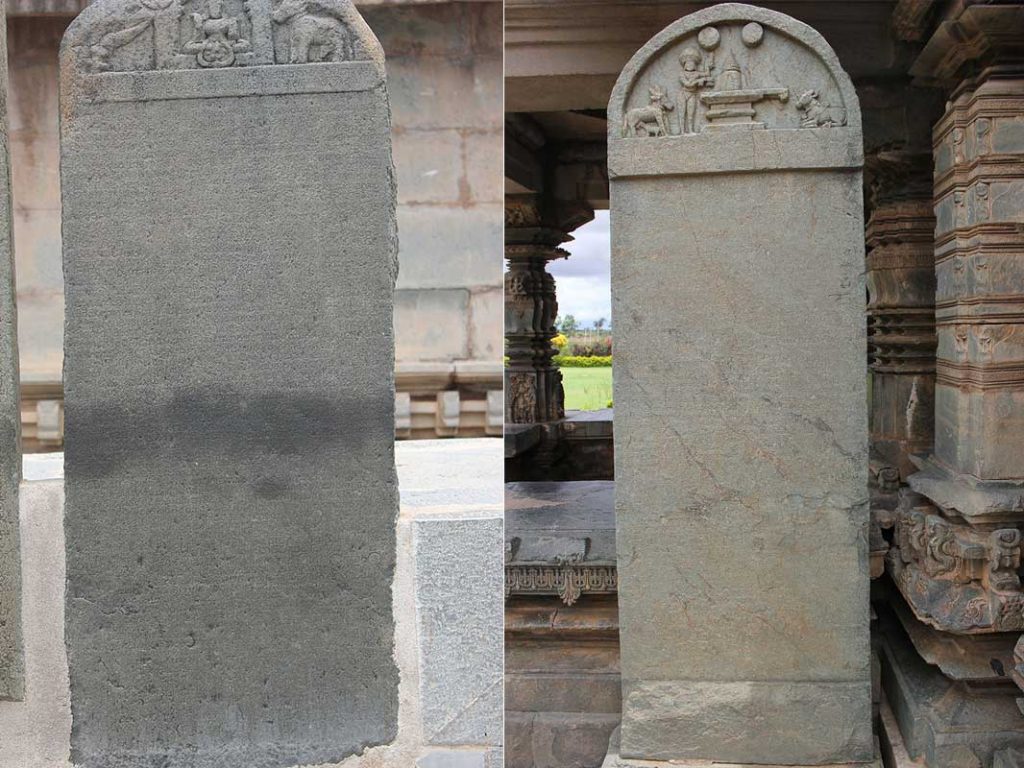 The doorway to the vestibule has artistic carvings of dvarapalas (door keepers), the goddess of love Rati, and god of love Manmatha. The door lintel (lalata) has an image of Gajalakshmi (Lakshmi flanked by elephants on either side). The eaves over the door has fine images of the Hindu deities Brahma, Keshava (a form of Vishnu) and Shiva. According to Sinha, the exuberance of sculptural articulation seen here is actually a southern Karnataka Hoysala influence on Chalukyan architecture.