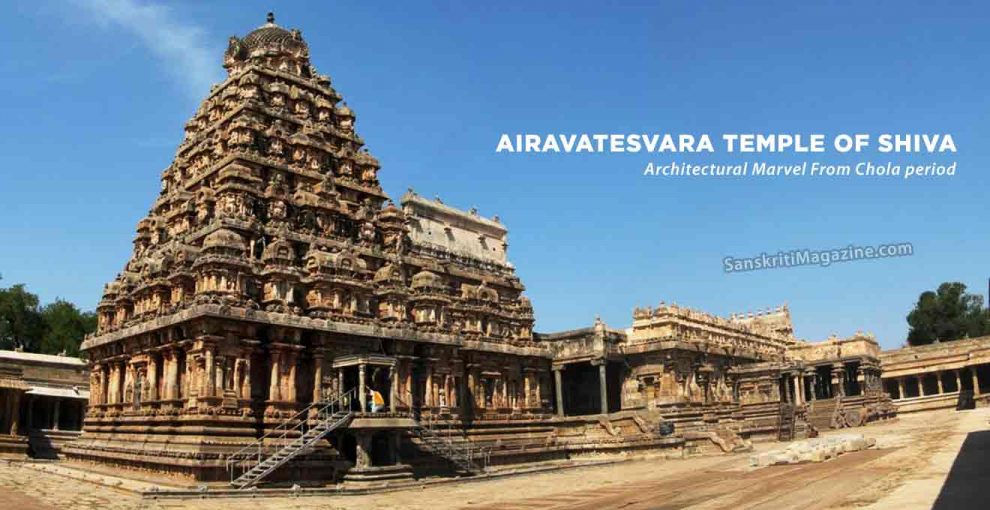 Airavatesvara Temple is a Hindu temple located in the town of Darasuram, near Kumbakonam in the South Indian state of Tamil Nadu. This temple, built by Rajaraja Chola II in the 12th century CE is a UNESCO World Heritage Site, along with the Brihadeeswara Temple at Thanjavur, the Gangaikondacholisvaram Temple at Gangaikonda Cholapuram that are referred to as the Great Living Chola Temples.

The Airavatesvara temple is dedicated to Lord Shiva. Shiva is here known as Airavateshvara, because he was worshipped at this temple by Airavata, the white elephant of the king of the Heaven, Indra. Legend has it that Airavata, while suffering from a change of colour curse from Sage Durvasa, had its colours restored by bathing in the sacred waters of this temple. This legend is commemorated by an image of Airavata with Indra seated in an inner shrine. The temple and the presiding deity derive its name from this incident.

It is said that the King of Death, Yama also worshipped Shiva here. Tradition has it Yama, who was suffering under a Rishi’s curse from a burning sensation all over the body, was cured by the presiding deity Airavatesvarar. Yama took bath in the sacred tank and got rid of the burning sensation. Since then the tank has been known as Yamateertham.

The main deity’s consort Periya Nayaki Amman temple is a detached temple situated to the north of the Airavateshvarar temple. This might have been a part of the main temple when the outer courts were complete. At present, it stands alone as a detached temple with the shrine of the Goddess standing in a single large court

This temple is a storehouse of art and architecture and has some exquisite stone carvings. Although this temple is much smaller than the Brihadeesvara Temple or the Gangaikondacholapuram Temple, it is more exquisite in detail. This is because this temple is said to have been built with nitya-vinoda, “perpetual entertainment”, in mind.

The vimana (tower) is 24 m (80 ft) high. The south side of the front mandapam is in the form of a huge chariot with large stone wheels drawn by horses. 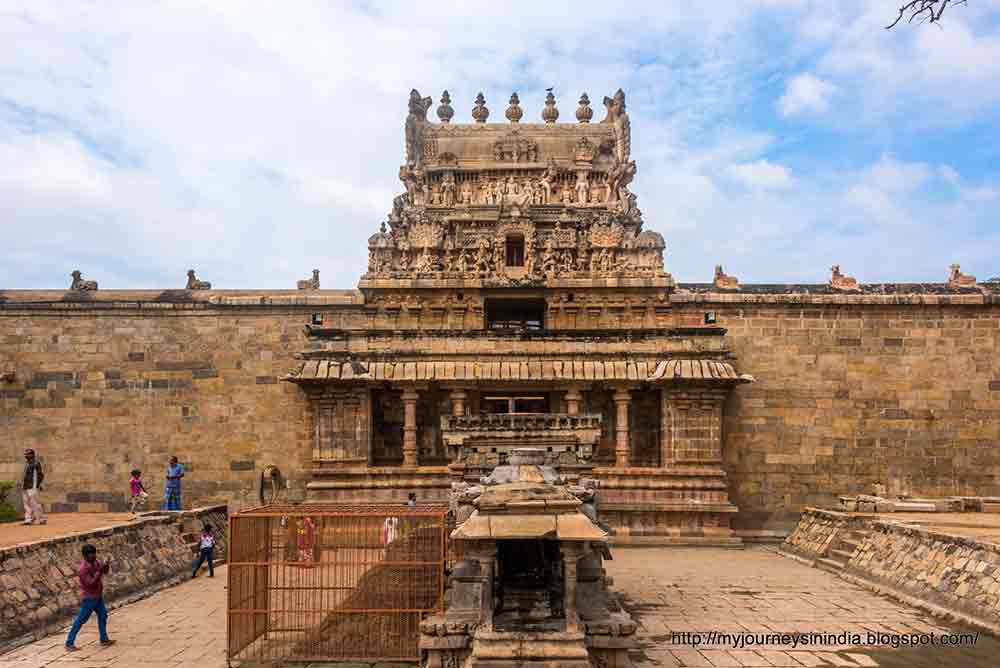 To the east of the inner court lies a group of well-carved buildings, one of which is the Balipita (‘seat for sacrifice’). The pedestal of the Balipita adjoins a small shrine which contains an image of Ganesha. The pedestal has a set of 3 finely carved set of steps on the south side. Striking the steps produce different musical sounds.

In the south-west corner of the court is a mandapam having 4 shrines. One of these has an image of Yama. Adjoining this shrine are large stone slabs sculptured with images of the sapthamathas (seven celestial nymphs).

There are various inscriptions in the temple. One of these records the renovation of the shrines by Kulottunga Chola III.

The north wall of the verandah consists of 108 sections of inscriptions, each containing the name and description and image of the Saivacharya (Saivite saints) listing the principal events in their life.

Another inscription close to the gopura, records that an image was brought from Kalyani, then known as Kalyanapura by emperor Rajadhiraja Chola I after his defeat of the Western Chalukya king Someshwara I, his sons Vikramaditya VI and Someshwara II his capture of the Chalukyan capital. 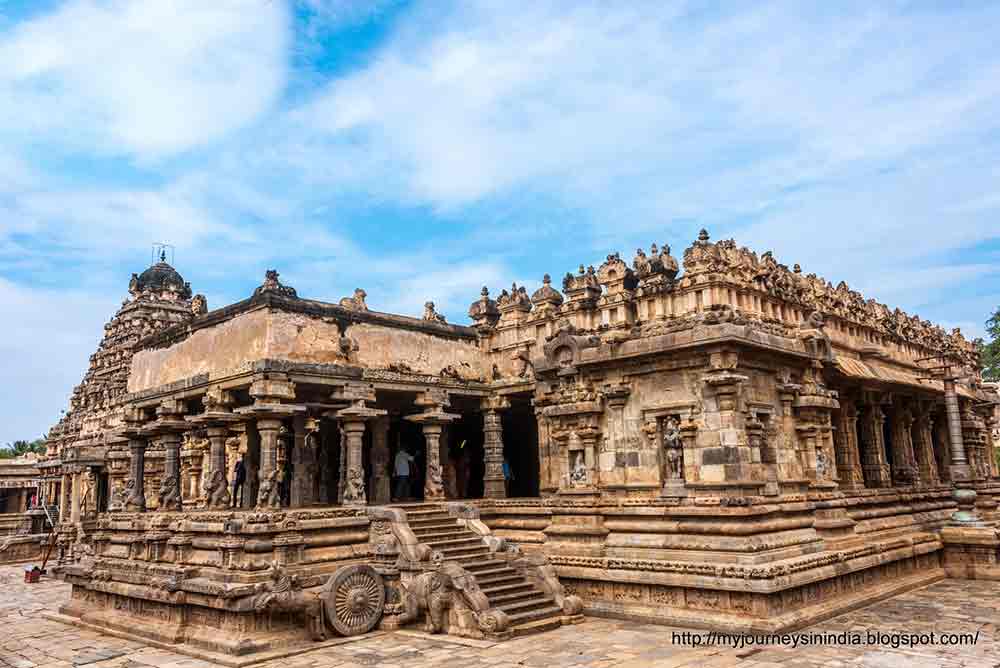 The Airavatesvara temple is dedicated to Lord Shiva. Here the Lord Siva is known “Airavateshvara” (the protector of the elephant), because he was worshiped at this temple by Airavata, the white elephant of Indra.

Airavata, while suffering a change of color from a curse inflicted by sage Durvasa, had its white color restored by ablutions performed in this temple. This incident is commemorated by an image of Airavata with Indra seated on in an inner shrine.

Another stiry tells, that Isvara appeared there in the form of Rudraksha (holy beads) tree, which branches and leaves represented various deities and sages.

One more important story is about Yama, the God of Death, who was suffering from a curse of Rishi which caused burning sensation all over his body. Yama went on a pilgrimage to various shrines, including Darasuram. There he bathed in the tank in front of the temple. The waters of this tank have been got by casing therein of Siva sulam (trident). After a long penance at the spot, Yama is said to have been cured of his ailment, and he thereon obtained permission to built a temple and observe a festival (Mahautsavam) annually for ten days.

The temple tank is called “Yama teertham” and the image of Yama seated on a pitam (pedestal) is in inner shrine, with Rishi in attendance. Yama has said to made a vow that those who managed the temple would be kings and that whose who bathed in the tank would be cleansed of their sins and diseases.

Three all stone temples, built by the Chola Kings, which are architectural marvels, exist at Thanjavur, Darasuram near Kumbakonam and Gangaikondacholapuram in Perambalur district. The uniqueness of all these three temples is that they are similar in architecture, style and are replete with sculptures and epigraphs.

The Big temple at Thanjavur was built by Raja Raja Cholan. It is big in all aspects with a 212 feet vimana, a big nandhi at the entrance, big linga, and a big Goddess Periyanayagi statue. 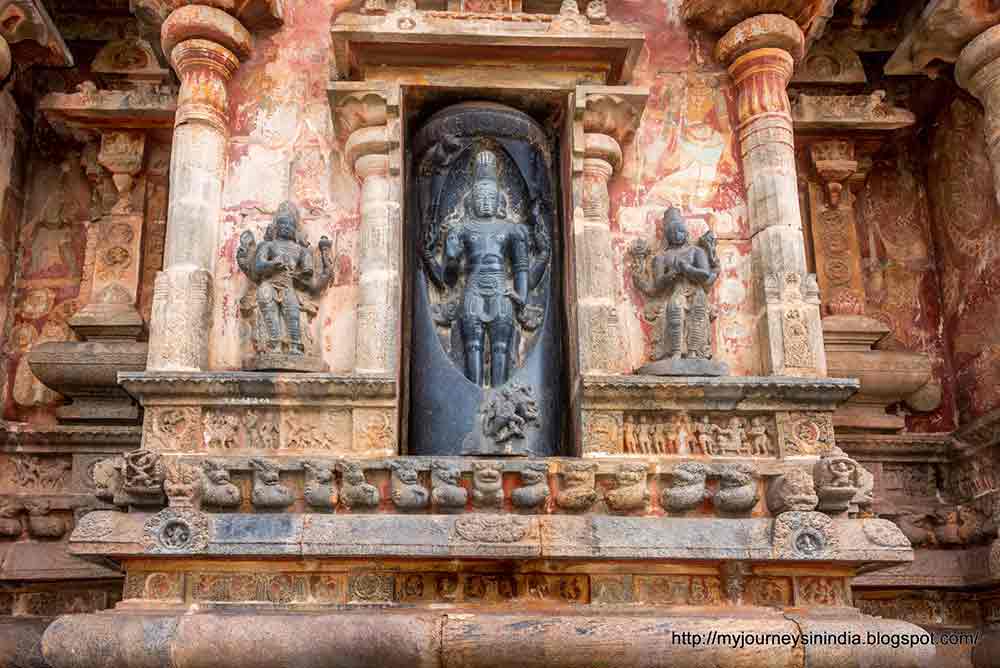 The temple is full of rare sculptures, chola period paintings, epigraphs that give details about the history of Raja Raja Cholan. His son Rajendra Cholan built the Big temple at Gangaikondacholapuram. The Airavatesvara temple at Darasuram near Kumbakonam was built by Raja Raja II (1150 A.D.).

Out of the three, Airavatesvara temple at Darasuram stands out for its intricate, beautiful sculptures. The temple in the form of a chariot being pulled by an elephant and horse with a fleet of steps is no doubt a repository of our art and culture. 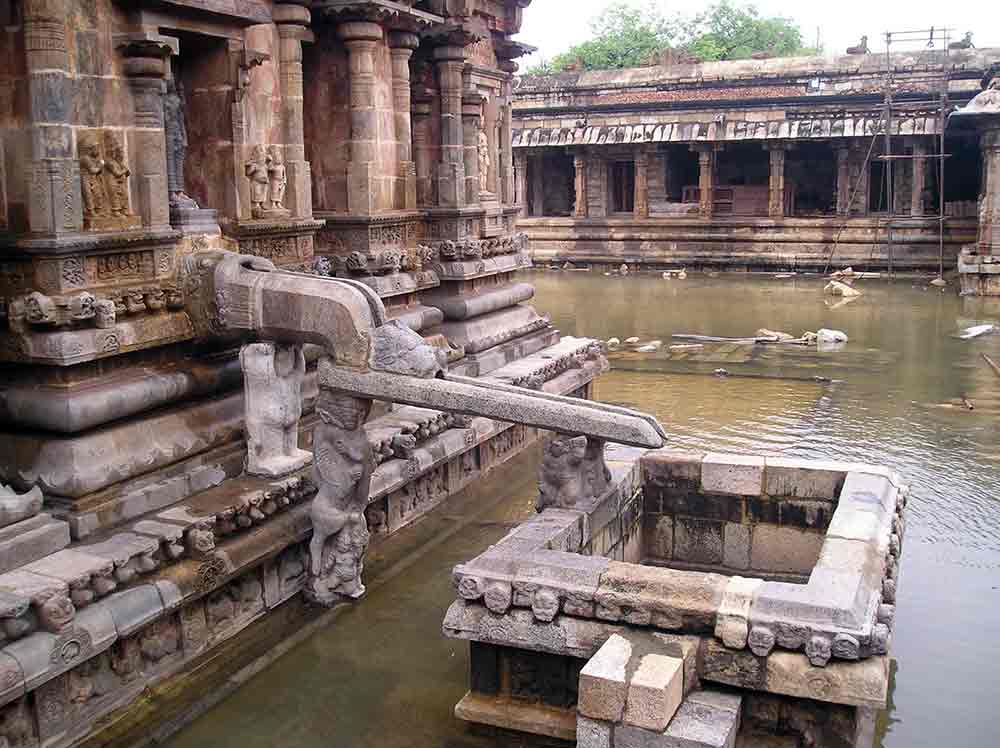 There are sculptures depicting the life history of Nayanmars at Melakadambur and Thirupanandal. But not in such detail,” Mr.Balasubramanian said. The temple starts with a mahadwara, main entrance on the eastern side.

The Mahadwara, which was in ruins, was reassembled by Archaeological Survey of India. The Palipeeda and Nandhi come next. Fleet of steps made of stone in the palipeeda are said to produce musical notes. 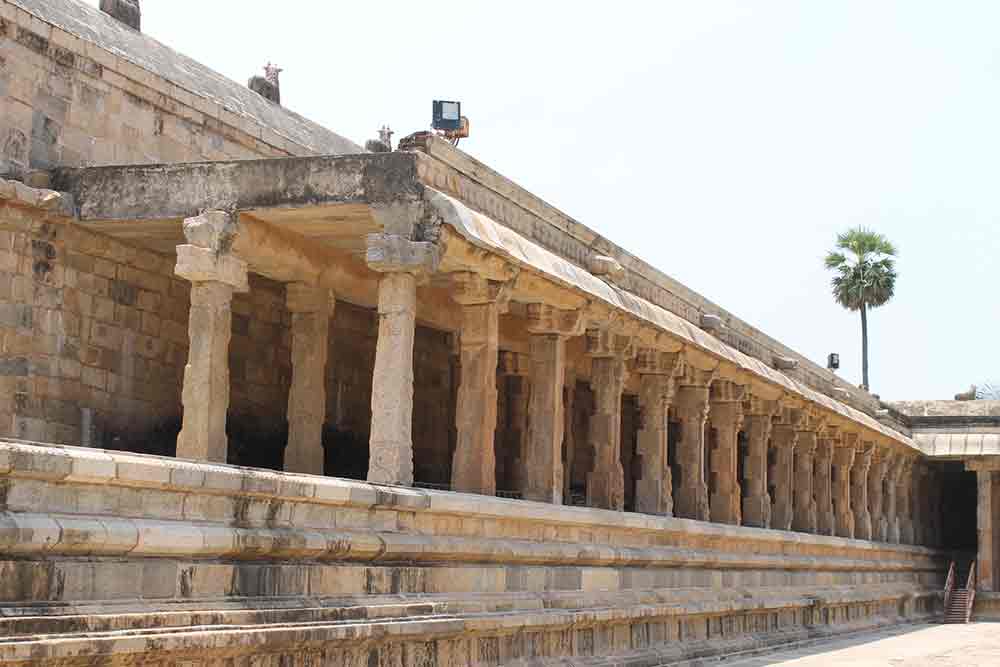 Other important sculptures of the temple are the 108 Devara Othuvars who sung in the temple during the time of Raja Raja II. There are sculptures for river goddesses like Cauvery, Ganges, Yamuna, Godavari and Narmada. “While the sculptures of rivers like Cauvery, Yamuna, Godavari are with human form till hip level and depicted in the form of water circles below, sculpture of Ganges is in full human form with a vessel of water in one hand and lotus flower in the other hand,” Mr.Balasubramanian said.

Two sculptures found in Darasuram have been brought to the Art gallery at Thanjavur . One is Gajamharamurthy in which Lord Siva slains the elephant demon and another is Dwarabalaga brought by Raja Raja I from Kalyan in Maharashtra as a war trophy. 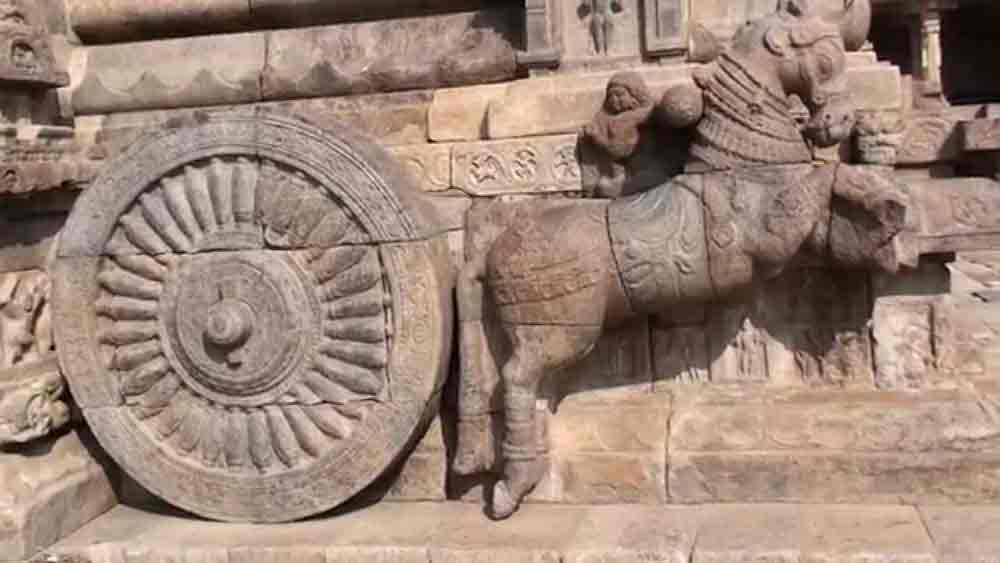 The United Nations Educational Scientific and Cultural Organisation (UNESCO) has declared the temple as a world heritage monument.

The Archaeological Survey of India is maintaining the temple well. With lush green lawns in front and illumination, the temple has become a tourist spot.