I lately visited temple of Nataraja, the Dancer, at Chidambaram. The Dikshitas, a sect or tribe of Brahmins whose hereditary right is conduct the worship, and share the revenues of the temple, keep considerable state. They made me leave my boots under the gopuram; “put off”, they said, ‘thy shoes from off thy feet, for the place whereon thou standest is holy’; a requisition with which it was not in my conscience to refuse compliance, particularly as I very much wanted to see the temple. But the pavement of the outer court was rough and weedy, and a European always feels rather small and foolish without his boots; and I suspected all the Dikshitas arrogated unto themselves much of the honour of my homage, for they seem to regard the god as a kind of an elder brother, or first among the equals, and boast that he has but a lot and share in the sacred household, like one of themselves.

The Hindus know more than we do about God, but they sometimes appear to presume upon their familiarity…… These Dikshitas are sleek, well grown fellows, who wear the golden emblem of the god embossed upon the clasp of their rosaries, and knot their hair jauntily on one side of the head, not at the back, as ordinary Brahmins do. Some of the boys in their white clothing and sallow sapliness were especially charming, and the youger ones reminded me of Italian angels, but without the rose.

To see the cars (Chariots) was one of the main objects of my visit. I had somehow never got the sight of processional cars of the Madura deity, though doubtless he somewhere stables vehicles worthy of his wealth and fame. 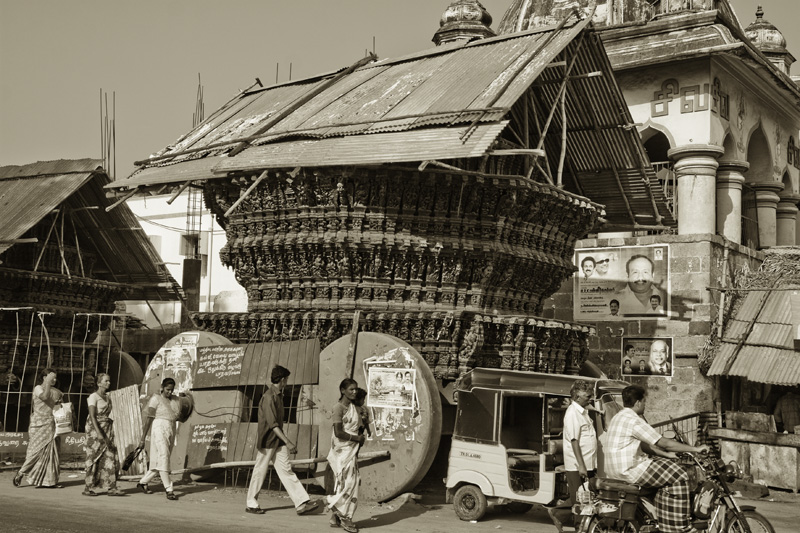 I was lucky enough to arrive at Chidambaram a few days before the festival, and the cars stood in a line before the eastern gopuram, bared of their huge caps of thatch and ready to be decorated. They were, if I mistake not, five in number, enough to accommodate all the Siva’s household and over. The chariot of the paternal deity was new, and the height of the wooden hull alone must have been nearly twenty feet the car was, as usual octagonal in shape, and over hung; and though inferior to some of the older cars in design and ornament, it was by no means unworthy to be placed among them.

The former car of the god, which stood beside it, and perhaps to devolve upon his consort, was not so large, but far superior in boldness and beauty of design and ornamental fancy. It stood like a museum on wheels, a moveable abridgement of Dravidian sacred art, not only learnedly representing all the persons and legends of the Saiva mythology, but displaying in exquisite miniature upon corbel, bracket and panel moulding all those decorative devices and canonical figures, the model shrines, and lotus bells, and mounted atlantes, and ramping beasts, and curious columns, and florid scrolls, that together constitute the very style and language of those epics in stone, the temples of the south. The other three cars were neither so large nor so elaborate as these, but seen anywhere else, would have well deserved admiration and study.

As a reward, perhaps, for taking my boots off, I was allowed much further into the sacred apartments than is usual with strangers in other temples. I stood before the ancient silver steps, curiously graven, of the shrine of the Dancer himself in his dancing hall – a raised porch thronged with the yellow, lusty torsos of serviceable Brahmins, who shealed large armfuls of plantains and threw them into pans. They were engaged, I am told, in preparing the Panchamrita or pentambrosia (if I so Hellenise the Sanskrit), the fivefold food of immortality, a mixture of the fruit aforesaid with butter, milk, honey and water, which is dealt out as a sacrament among the worshippers.

I was shown the famous Air Lingam, the secret of Chidambaram, which is no more, I am told, than an empty cell, said to contain the invisible emblem of the god; a queer blend, like so much else of popular Hinduism, between spiritual teaching and the craft of the showman.

Those were the festival days at Chidambaram, and every morning the five gods went in procession through the streets nearest the temple. Wreathed and almost hidden in garlands of yellow flowers, the brazen images were carried in carved and gilded arks or thrones upon the shoulders of the temple servants. The god’s two elephants, one of them a very giant, walked before caparisoned in crimson, and there were curious flags, and a music of old world instruments, and chanting choirs; not all in evidence at first, but added severally from day to day so as to maintain a gradual increase of display, until the climax of the festival should be marked, presumably, by the appearance of the cars. 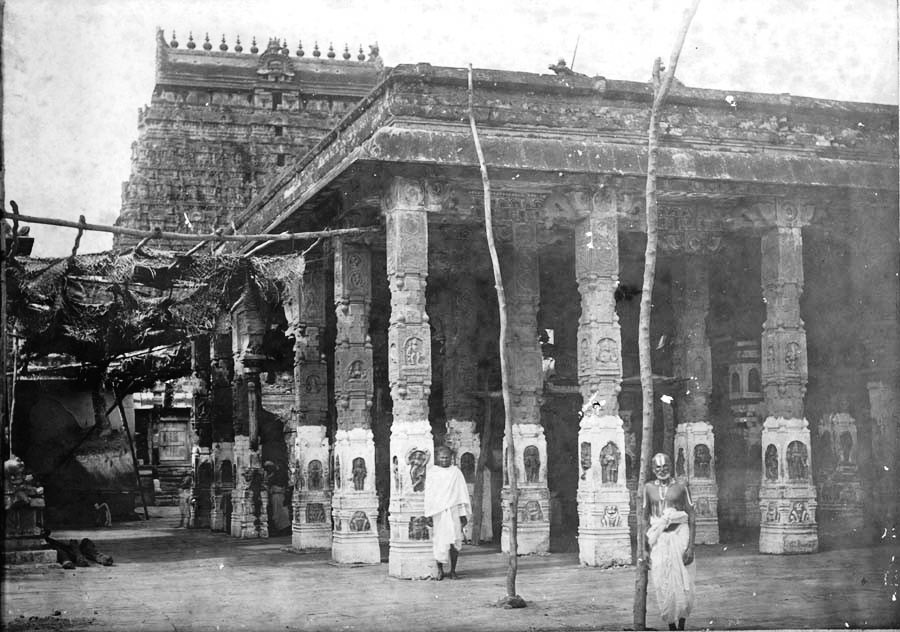 Brahmins from all parts have come together on this occasion, to minister pilgrims, and share the bounty of the Dikshitas. Increasing numbers of them walked daily in procession hand in hand, singing responses and receiving alms of rice, which one of the Dikshitas distributed, walking up and down the lines. This functionary with his golden ornaments, and scarf of crimson silk thrown over his naked shoulders, in token, I presume, of his dignity as the vehicle of god’s bounty, looked very spruce and sleek beside his poor and vagrant brethren. The latter, for processional purposes, were divided into two bands- the veterans and the bachelors. They sang their Sanskrit antiphonal with a vigour and sharpness of enunciation, an exactitude of mutual register, an absolute perfection of unison, such as I should not have considered possible among vagrants gathered suddenly together. They chanted like one stentorian throat and gave me a new notion of the power of words and music, properly welded, to set each other off.

I spent a week in Chidambaram, loitering and making sketches. I became familiar with the life of the place, and learned the ritual of the festival. I had to leave Chidambaram while the festival had some days to run, so that I did not see the cars in motion after all. But on the last night of my stay, as I left my house, fortunately early, for the little railway station, I saw the southern gate head aglow with a great orange light. I hastened to the spot, and found in the street a numerous concourse of people watching the same pageant, which I had seen daily in the forenoon, but now very much enlarged, and quite transfigured. It shone, not with Washington gas lights, such as vulgarise all the night festivals of the north, and even of madras, but in fierce old-fashioned flare of torches. 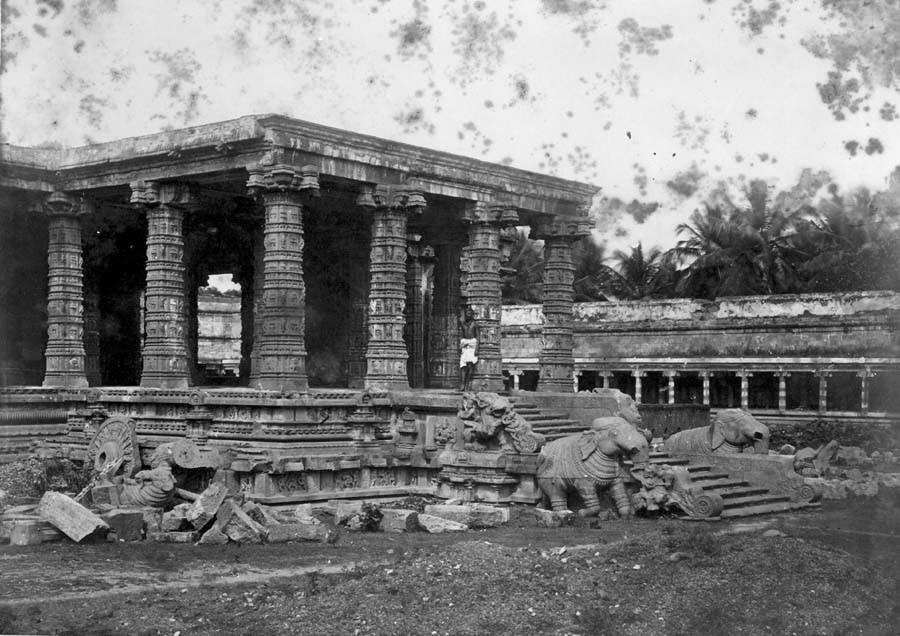 There were the elephants, the musicians, the Brahmin choirs, reinforced beyond recognition; but the gods themselves, who came after, no longer rode on Chairs, or arks, or whatever you choose to call the little tabernacles in which they moved before, but upon their appropriate ‘vehicles (Vhanams)’, Siva on his bull, Skanda on his peacock, Ganapati on his bandicoot, like the Seven Deadly Sins in an old morality. All too hurriedly I perused this weird procession. The animals were cast in some silvern metal, and the style of Siva’s bull in particular put me in mind of Jeroboam’s idol, or the calf in Horeb. They were fixed upon huge timbers, and borne shoulder-high by much greater number than were found before necessary to carry the tabernacles. High above the smoke and glare, the din, the moving multitudes, the dance of monstrous shadows, a green moon, three-quarters full, the moon of the festival, hung aslant in a sky of jade.