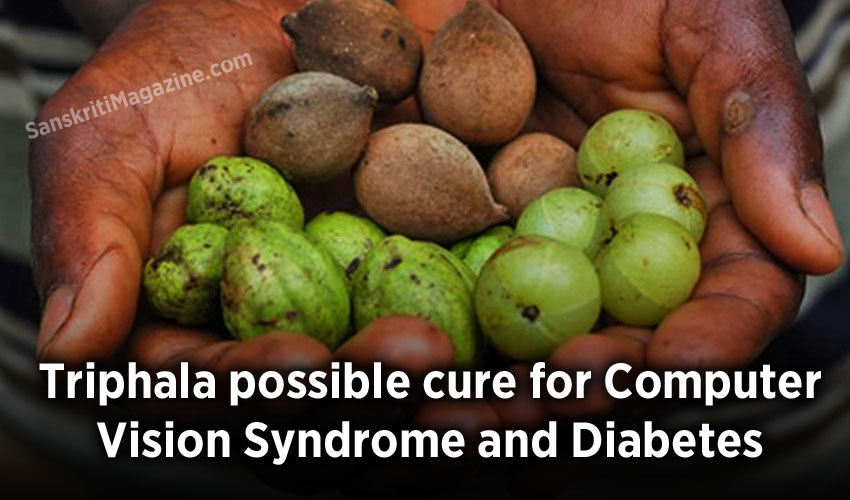 Triphala, one of ayurveda’s most popular herbal remedies, used in India for centuries as a digestive aid and immunity booster, could potentially be used for treatment in a range of health problems, including Computer Vision Syndrome, infections caused by drug resistant pathogens, diabetes and recurrent rhinitis.

Vouching for the clinical efficacy of the herbal remedies, a host of peer reviewed research papers from India and abroad will be presented at the 6th World Ayurveda Congress themed ‘Ayurveda and Health Challenges’ to be held from November 6-9 in the National Capital.Triphala, a formulation consisting of the fruits of  Amla,  Haritaki and  Bibhitaki, has attracted much scientific interest in recent times, with many studies establishing its free radical scavenging, anti-oxidative, anti-microbial and anti-cancer properties.

A team led by Amitabha Mapdar at the National Institute of Ayurveda in Jaipur conducted a single group study with 50 subjects to determine the effect of Triphala Madhu Sarpi (combination of Triphala, honey and ghee) in relieving the symptoms of Computer Vision Syndrome (CVS). CVS is a lifestyle disease caused by the prolonged use of computers; symptoms include dry eyes, blurred vision, itchiness, fatigue, headache and pain in the neck, shoulder and back. The study showed that Triphala Madhu Sarpi, administered for two months, was able to relieve symptoms of CVS by up to 75 per cent.

Another study by Amirthasingam Manoraj, a researcher at the Department of Microbiology, Faculty of Medicine, University of Peradeniya in Sri Lanka found that aqueous extracts of Triphala and its constituent plants are effective against multidrug-resistant (MDR) pathogens, indicating that potent antibacterial drugs can be derived from these.

The extracts were tested on strains of Eschericia coli and 21 MDR pathogens including Methicillin-resistant Staphylococcus aureus (MRSA), Enterococcus faecalis, Penicillin-resistant Streptococcus pneumonia and others which cause infections that do not respond to conventional drugs and are therefore difficult to treat.

The results showed that Triphala and its constituents are capable of inhibiting bacterial growth. In the case of the dreaded MRSA, the plant extracts showed anti-bacterial activity even at high dilutions.An open clinical trial on 30 subjects conducted by Ankush Jagota at the Government Ayurveda College in Thripunithura, Kerala, demonstrated that Triphala Rasayana administered in powdered form along with honey and ghee helped reduce the symptoms of recurrent rhinitis, an infection of the upper respiratory tract that results in stuffy or runny nose and inflammation.

Triphala has also been shown in several previous studies to be beneficial in managing diabetes and metabolic problems, but its cellular targets are largely obscure. Research led by Nita Singh at Jiwaji University in Gwalior, has identified, for the first time, a series of molecular and signalling pathway proteins that Triphala targets to stabilise glucose and lipid levels.

Also, a 12-month study on subjects with Type II Diabetes Mellitus concluded that a 1:4:1 Triphala formulation could relieve multiple problems including high blood sugar and high lipid levels, and offer protection against development of complications associated with the condition.The WAC is being organised by Department of AYUSH, Union Health Ministry in collaboration with World Ayurveda Foundation and the Delhi Government.

Do you know what`s in your McDonald French Fries?
15 Benefits of Listening to Music
Comment