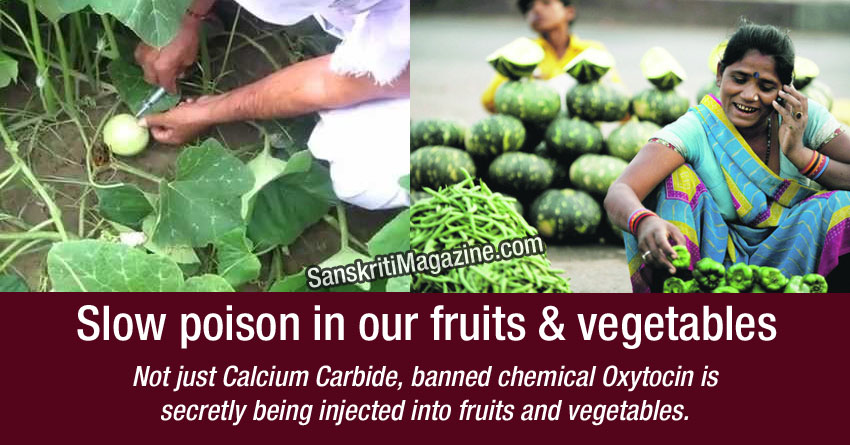 It’s not just Calcium Carbide, banned chemical Oxytocin is secretly being injected into fruits and vegetables.

Horticulture experts admit that oxytocin is now increasingly used to promote artificial growth in fruits and vegetables and to enhance their texture, aroma and skin colour. Along with calcium carbide and ethephon, oxytocin is fast turning into a health hazard.Doctors warn that since oxytocin is a hormone, it will have psycho-sociological impact on people who consume fruits and vegetables laced with the chemical. According to Dr Bandi Hari Krishna, assistant professor in Sri Venkateswara Medical Col lege, Tirupati, excess intake of oxytocin will lead to psychological changes in the individual, affecting hisher behaviour in society .

“We do not know how the synthetic oxytocin actually works once the chemical enters the body . Since it is considered a love hormone that promotes bonding, excess intake may lead to crimes against women. However, we need more research to establish this,” Dr Hari Krishna told TOI. Clinical psychologist Dr Minhaz Naseerabadi of Apollo Hospitals said studies have shown that oxytocin is capable of inducing early puberty in boys and girls.”It is basically a type of sexual hormone,” he said, adding that a girl can attain puberty a couple of years earlier if she is exposed to this chemical. 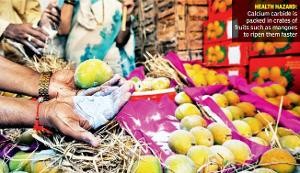 Oxytocin is said to be increasingly used in crops like mango, banana, cucumber, pumpkin, guava, sapota, apple, brinjal, various gourds, watermelons, kiwi, fig, pear and apricot. Some farmers spray the chemical in the fields while others inject it into fruits believing it will improve their looks. The next time you go to the market, do not be carried away by the big, shiny lustrous fruits on display. They may well have been pumped up with a chemical called oxytocin.

According to Dr Hari Krishna, there is no harm as long as the oxytocin is released naturally in the body , but the trouble begins when it is synthesized and used in plants. The side effects in women include contraction of the uterus, thereby reducing the blood flow and damaging the amniotic fluid, he said.”Ironically, officials have been concentrating more on calcium carbide and ethephon, a type of pesticide, while ignoring oxytocin. This is because while traders use calcium carbide openly , farmers inject or spray oxytocin in secrecy as it is a banned product,” said environment activist V Satyanarayana. “Worse, many resort to artificial colours too, which is even more harmful,” he warned.

Slow Poison in our food…