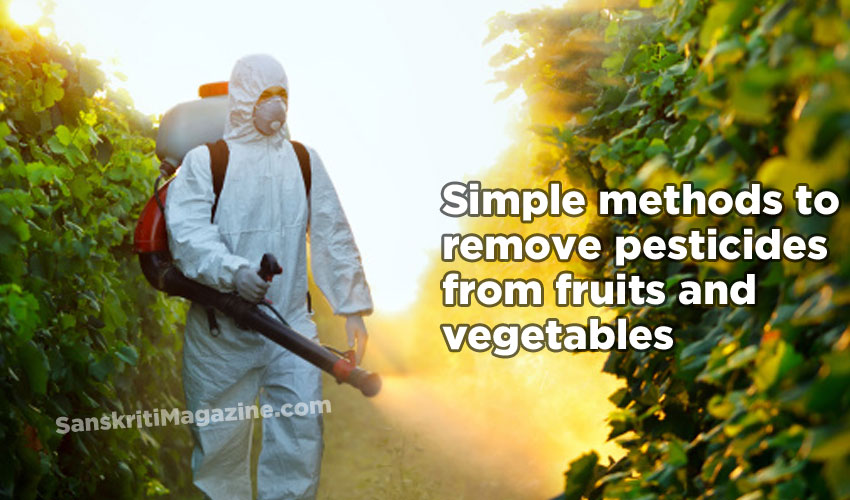 Whether we like it or not, unless we buy organic, pesticides and waxes on our produce are here to stay.

As consumers we do not have any control on the pesticides that is sprayed on fruits and vegetables in the farms but there are some quick do-it-yourself techniques that can help us get rid of the residues to a large extent.

The National Institute of Nutrition (NIN), released the Dietary Guidelines for India recently. The guidelines has introduced some simple steps which should be adopted by every household to remove the pesticide residual contamination. These easy steps should be cast in stone in every household.

The first step in the removal of pesticide residues from the food products is washing. Washing with 2% of salt water will remove most of the contact pesticide residues that normally appear on the surface of the vegetables and fruits.

About 75-80% of pesticide reduces are removed by cold water washing. The pesticide residues that are on the surface of fruits like grapes, apples, guava, plums, mangoes, peaches and pears and fruity vegetables like tomatoes, brinjal and okra require two to three washings.

A short treatment in hot water or steam applied to most of the vegetables. Certain pesticide residues can effectively be removed by blanching. But before blanching it is very important to thoroughly pre-wash the vegetables and fruits.

Both systemic and contact pesticides that appear on the surface of the fruits andvegetables can be removed by peeling.

Steps such as concentration, dehydration and extraction from the raw product can further reduce pesticide residues in the end product. The net influence of processing almost always results in minimal residues in processed food.

Animal products are also the major source of contamination for pesticide residues in human diets since the animals feed on fodder, which are sprayed with pesticides.

Boiling of milk at elevated temperatures will destroy the persistent pesticide residues.

Refined oils will have fewer amounts of pesticide residues.

Household heating of oils up to a particular flash point will remove pesticide residues.

15 Benefits of Listening to Music
Ayurveda, the World’s Medicine for the Next Millennium
Comment