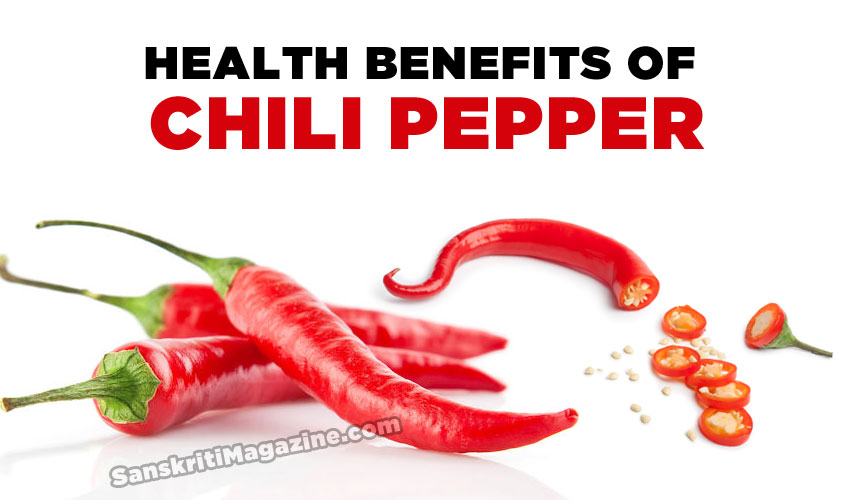 Chili peppers are available throughout the year to add zest to flavorful dishes around the world and health to those brave enough to risk their fiery heat.

This is the plant that puts fire on your tongue and maybe even a tear in your eye when you eat spicy Mexican, simmering Szechuan, smoldering Indian, or torrid Thai food. Chili peppers belong to the family of foods bearing the Latin name Capsicum. 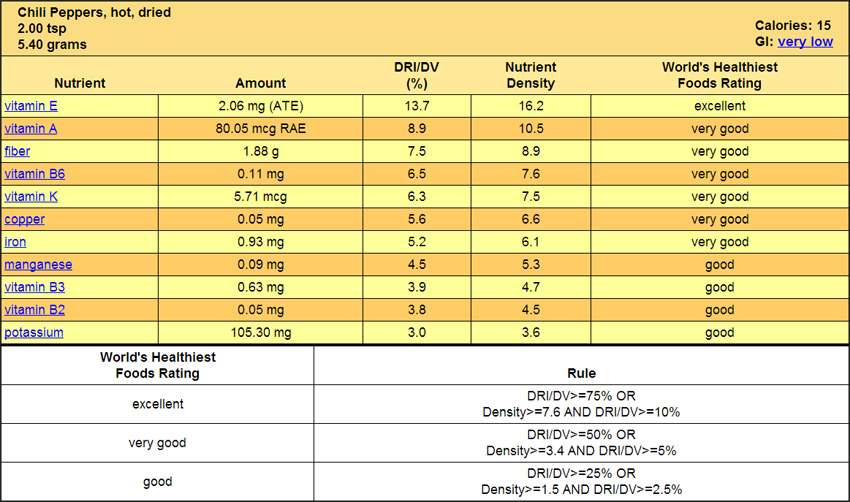 Chili peppers contain a substance called capsaicin, which gives peppers their characteristic pungence, producing mild to intense spice when eaten. Capsaicin is a potent inhibitor of substance P, a neuropeptide associated with inflammatory processes. The hotter the chili pepper, the more capsaicin it contains. The hottest varieties include habanero and Scotch bonnet peppers. Jalapenos are next in their heat and capsaicin content, followed by the milder varieties, including Spanish pimentos, and Anaheim and Hungarian cherry peppers.

Capsaicin is being studied as an effective treatment for sensory nerve fiber disorders, including pain associated with arthritis, psoriasis, and diabetic neuropathy. When animals injected with a substance that causes inflammatory arthritis were fed a diet that contained capsaicin, they had delayed onset of arthritis, and also significantly reduced paw inflammation.

Topical capsaicin is now a recognized treatment option for osteoarthritis pain. Several review studies of pain management for diabetic neuropathy have listed the benefits of topical capsaicin to alleviate disabling pain associated with this condition.

In a double-blind placebo controlled trial, nearly 200 patients with psoriasis were given topical preparations containing either capsaicin or placebo. Patients who were given capsaicin reported significant improvement based on a severity score which traced symptoms associated with psoriasis. The side effect reported with topical capsaicin cream is a burning sensation at the area of application.

Red chili peppers, such as cayenne, have been shown to reduce blood cholesterol, triglyceride levels, and platelet aggregation, while increasing the body’s ability to dissolve fibrin, a substance integral to the formation of blood clots. Cultures where hot pepper is used liberally have a much lower rate of heart attack, stroke and pulmonary embolism.

Spicing your meals with chili peppers may also protect the fats in your blood from damage by free radicals – a first step in the development of atherosclerosis. In a randomized, crossover study involving 27 healthy subjects (14 women, 13 men), eating freshly chopped chili was found to increase the resistance of blood fats, such as cholesterol and triglycerides, to oxidation (free radical injury).

Subjects were randomly divided into 2 groups. For 4 weeks, half the subjects ate a freshly chopped chili blend (30 grams/day, about 1 ounce), consisting of 55% cayenne, while the other half consumed a bland diet (no chili). After 4 weeks, the groups were crossed over for another 4 weeks. During the intervention periods, consumption of other spices such as cinnamon, ginger, garlic, and mustard was restricted. Blood samples were obtained at the beginning of the study and after each dietary period.

After eating the chili-containing diet, the rate of oxidation (free radical damage to cholesterol and triglycerides) was significantly lower in both men and women than that seen after eating the bland diet.

In addition, after eating the chili-spiced diet, women had a longer lag time before any damage to cholesterol was seen compared to the lag time seen after eating the bland diet. In men, the chili-diet also lowered resting heart rate and increased the amount of blood reaching the heart.

Capsaicin not only reduces pain, but its peppery heat also stimulates secretions that help clear mucus from your stuffed up nose or congested lungs.

The bright color of red chili peppers signals its high content of beta-carotene or pro-vitamin A. Just two teaspoons of red chili peppers provide about 6% of the daily value for vitamin C coupled with more than 10% of the daily value for vitamin A. Often called the anti-infection vitamin, vitamin A is essential for healthy mucous membranes, which line the nasal passages, lungs, intestinal tract and urinary tract and serve as the body’s first line of defense against invading pathogens.

Red chili peppers’ capsaicin, the compound responsible for their pungent heat, stops the spread of prostate cancer cells through a variety of mechanisms, indicates a study published in the March 15, 2006 issue of Cancer Research . Capsaicin triggers suicide in both primary types of prostate cancer cell lines, those whose growth is stimulated by male hormones and those not affected by them. In addition, capsaicin lessens the expression of prostate-specific antigen (PSA), inhibits the ability of the most potent form of testosterone, dihydrotestosterone, to activate PSA, and directly inhibits PSA transcription, causing PSA levels to plummet.

The dose effective for test animals was equivalent to 400 milligrams of capsaicin, three times a week, for a man weighing about 200 pounds. After four weeks of receiving capsaicin, prostate cancer tumor growth and size decreased significantly in the animals. One warning: Excessive intake of hot chilies has been linked to stomach cancer, so don’t go overboard.

Chili peppers have a bad—and mistaken—reputation for contributing to stomach ulcers. Not only do they not cause ulcers, they can help prevent them by killing bacteria you may have ingested, while stimulating the cells lining the stomach to secrete protective buffering juices.

All that heat you feel after eating hot chili peppers takes energy—and calories to produce. Even sweet red peppers have been found to contain substances that significantly increase thermogenesis (heat production) and oxygen consumption for more than 20 minutes after they are eaten.

Making chili pepper a frequently enjoyed spice in your Healthiest Way of Eating could help reduce your risk of hyperinsulinemia (high blood levels of insulin)—a disorder associated with type 2 diabetes.

In a study published in the July 2006 issue of the American Journal of Clinical Nutrition, Australian researchers show that the amount of insulin required to lower blood sugar after a meal is reduced if the meal contains chili pepper. When chili-containing meals are a regular part of the diet, insulin requirements drop even lower.

Plus, chili’s beneficial effects on insulin needs get even better as body mass index (BMI, a measure of obesity) increases. In overweight people, not only do chili-containing meals significantly lower the amount of insulin required to lower blood sugar levels after a meal, but chili-containing meals also result in a lower ratio of C-peptide/ insulin, an indication that the rate at which the liver is clearing insulin has increased.

Blood sugar rose similarly after all three interventions, but insulin rose the most after the bland meal after a bland diet and the least after the chili-containing meal after a chili-rich diet.

In addition, the C-peptide/insulin ratio was highest after the chili-containing meal after a chili-rich diet, indicating an increase in the liver’s ability to clear insulin.

A little chili pepper can really perk up an omelet, add heat to a black bean/sweet potato soup, or transform an ordinary salad dressing. So, spice up your meals with chili peppers. Your body will need to make less insulin and will use it more effectively. No need to go overboard though. Population studies in India and Mexico suggest that loading up on hot chilies at every meal may be linked to increased risk of stomach cancer.

Capsaicin can irritate or burn your eyes or hands. Chili oil can stick to the skin, so wash hands thoroughly after handling the peppers and be cautious about touching your hands to your eyes. Be aware that pepper dust from grinding dried peppers can irritate throat and eyes. You can protect yourself by wearing a dust mask and goggles.

If you find you can’t take the heat, cool off with a glass of milk. A protein in milk called casein can help douse capsaicin’s fire.

Chili pepper is one of the vegetables in the nightshade (Solanaceae) family, which also includes eggplant, tomatoes, bell peppers and white potatoes. Anecdotal case histories link improvement in arthritis symptoms with removal of these foods; however, there are no scientific studies to date that confirm this information.

According to the Environmental Working Group (EWG) in their 2014 report, Shopper’s Guide to Pesticides in Produce, conventionally grown hot peppers are contaminated with concentrations of organophosphate insecticides, which are considered to be highly toxic to the nervous system. While they were not among the 12 varieties of produce most concentrated in overall pesticide residues (and therefore not part of the EWG’s traditional “Dirty Dozen”), the EWG felt that this organophosphate concentration was relevant enough to bring attention to hot peppers. They actually renamed their produce category of concern from “Dirty Dozen” to “Dirty Dozen Plus” with hot peppers, kale, and collard greens being the “Plus” conventionally grown produce. Therefore, individuals wanting to avoid pesticide-associated health risks may want to avoid consumption of hot peppers unless they are grown organically.